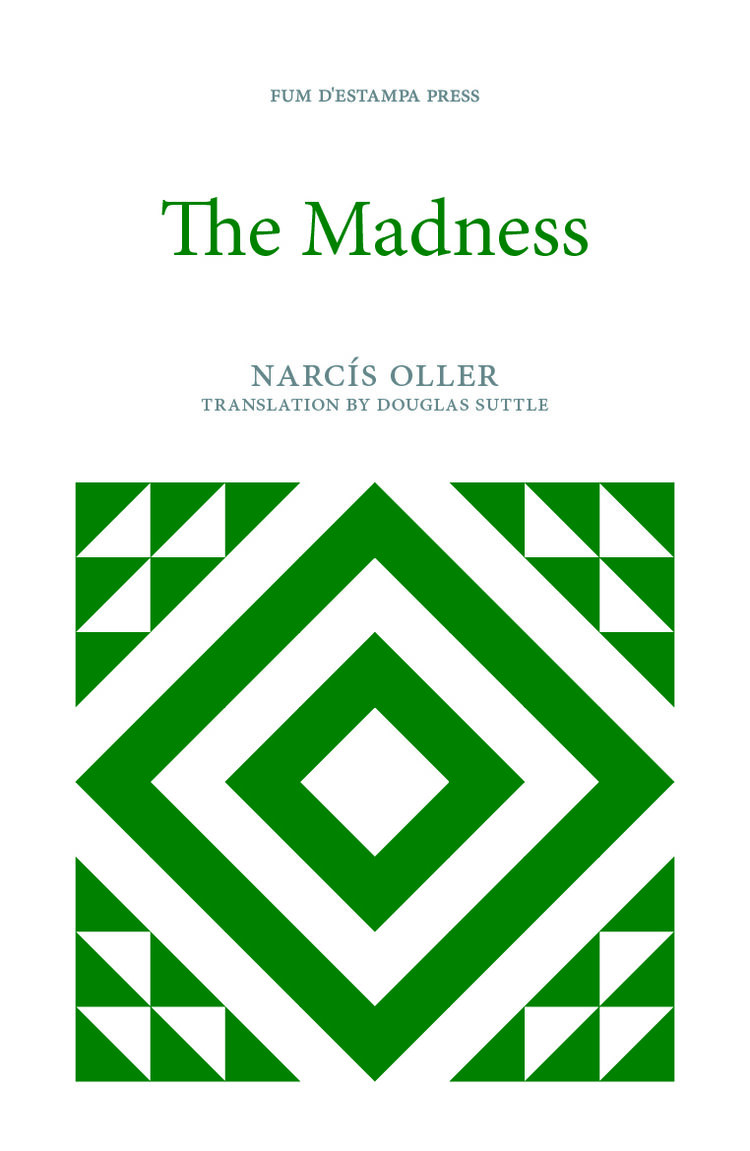 Despite being widely regarded as one of the catalysts of the contemporary Catalan novel, the work of Narcís Oller (1846–1930) is little known in the English-speaking world. Perhaps with Douglas Suttle’s wonderfully sharp translation of The Madness, this is set to change.

First published in 1899 and set between 1863 and 1883, the novella follows one man’s dramatic descent into madness. In just one hundred pages of precise and fast-paced prose, Oller’s realist style breathes life into the society of nineteenth-century Catalonia, and the dramatic and constantly fluctuating political and social changes that occurred during this period. Through the central character of Daniel Serrallonga, Oller subtly dissects this important and explosive era in Spain’s political history: a period of general strikes, military intervention, repression and political assassination, all of which manifest in Serrallonga’s troubled mind.

While Serrallonga’s deteriorating mind is the focus of the novella, the reader never quite comes to understand its intricacies, as his story unravels only through the eyes of an unnamed narrator – a friend and spectator to the ‘madness’. The novella centres around discussions between the narrator and his two friends, Armengol and Giberga, in which they analyse Serrallonga’s actions and speculate on where his madness ‘comes from’. This outsider’s perspective allows Oller to critique society’s views of mental illness. The Madness,then, focuses not on the suffering individual, but instead on how they are perceived by society. It is in this sense that, despite being written more than a hundred years ago, the novella still speaks to a contemporary audience; the negative speculation around mental illness unfortunately still rings true today.

While the novella’s tone is undeniably of its time, Suttle’s attentive translation allows the reader to become immersed in this nineteenth-century world, while still making it relevant to a contemporary reader. At times Oller provides a somewhat antiquated view of mental illness – the bullish physician Giberga describing it as ‘congenital’, with ‘genetics [as] a clearly defined cause’; but there are unusual glimpses of what at the time would have been considered very modern thought on the topic. For instance, the narrator is constantly dismissing Giberga’s sweeping diagnoses, offering a surprisingly modern counterargument. However, despite our narrator’s often sympathetic thoughts, it’s difficult not to feel these are prompted by a sense of responsibility for some of Serrallonga’s dramatic breakdowns, and we begin to question just how much we can trust him.

Juxtaposing the precise with the extravagant, Oller subtly denounces the political turmoil of his time and explores the effects that this can have on an individual. At the same time he exposes the absurdities of the bourgeoisie and their customs, and perhaps most importantly, casts a critical eye on how irresponsible speculation misrepresents mental health.

Suttle’s brilliant translation perfectly renders this multi-layered novella that balances the political and the social, humour and seriousness, and most importantly, the present and the past, forcing the reader to consider how little societal views on mental health and ‘madness’ have changed over the course of 121 years.