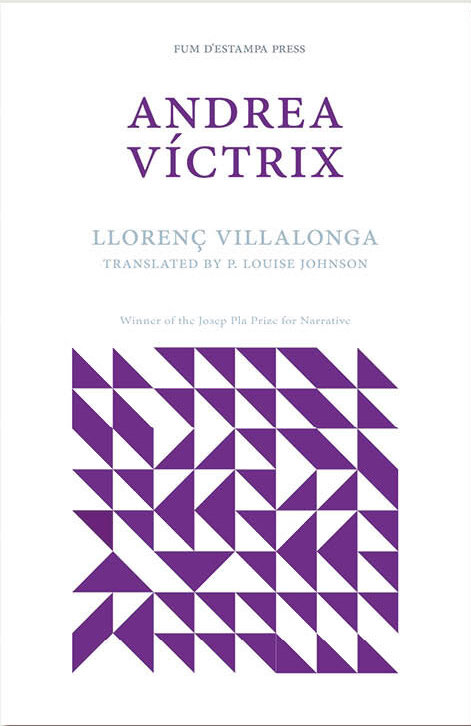 In Andrea Víctrix, first published in 1974, Villalonga speculates on a future that now doesn’t seem too far away. In 2050, on the island of Mallorca – whose capital is here known as ‘Turclub’ (Tourist Club of the Mediterranean) – gender no longer exists, love and sex mean two very different things, and hyper-consumerism props up the new nation of the United States of Europe.

In 1965, our unnamed narrator underwent a ‘cryo-cure’ from which he wakes in 2050, confused, disorientated, and thirty years younger. As he begins to navigate his new reality – a reality that he finds unfamiliar and deeply unpleasant – readers are immersed in a vivid and well-thought-out new world, which sees Paris as the capital of the United States of Europe. Like the narrator, readers are thrust into a bizarre, but not completely unrealistic new world. Our narrator encounters an industrialised and collective society where hyper-consumerism equals patriotism, environmental disaster is rife and viviparity is considered shameful, with most humans now being created in laboratories.

However, the most jarring change that the narrator struggles to come to terms with is the fact that gender neutrality now exists. Most of Turclub’s population appears and identifies as gender-neutral, and presenting or speaking of a binary gender is now blasphemous and subject to punishment. Helping guide the narrator through these disorientating times is the beautiful and indecipherable Andrea Víctrix, a.k.a. Director of Pleasure. Andrea is a fascinating character; an ‘ornament’ for the US of Europe and a person pushed to their limits for the good of the community. While the narrator welcomes the guidance of Andrea, they also provoke in him a great deal of frustration. Quickly becoming infatuated with Andrea and their captivating beauty, our narrator desperately attempts to identify their gender. These attempts, however, are futile, causing the narrator to struggle with the idea that he could, in fact, be in love with a man.

While these frustrations surrounding Andrea’s gender identity could be considered the central thread of the novel, our narrator also embarks on the task of convincing Andrea of the way of life ‘before’. Although one can certainly read this novel as critical of socialism, industrialisation and consumerism, and perhaps most damningly, of gender-neutrality, these conversations between Andrea and the narrator mean it avoids this. These debates, which occur throughout the novel, create a space for discussions that are still relevant, and incredibly important, today.

Villalonga’s prose, in Johnson’s expertly crafted translation is extravagant and striking, perfectly suited to the city of Turclub, where decadence and hedonism are of utmost importance. The translator’s task could not have been easy – particularly in terms of language and gender surrounding the mysterious character of Andrea Víctrix – however, Johnson’s translation perfectly captures Villalonga’s often dark humour and immerses us deep into the world of Turclub, a city of excess and extravagance. This flamboyant and brilliant prose, however, never distracts from the important discussions that the novel can fuel today.