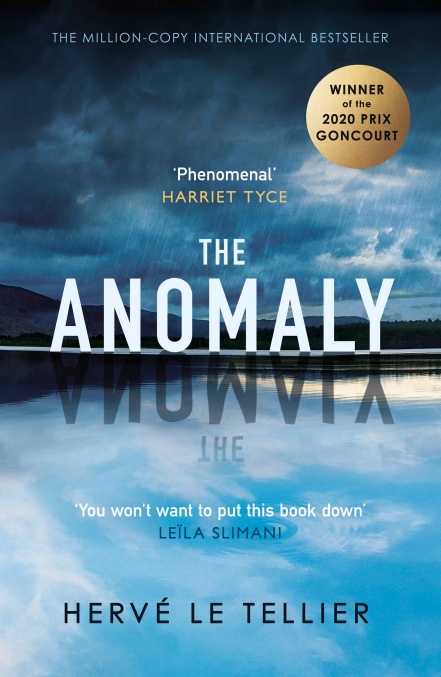 L’anomalie first came onto my radar back in late summer 2020, when Hervé Le Tellier’s logic-defying tale of a transatlantic flight that is duplicated during a freak storm – crew and passengers included – set literary langues and pulses aflutter as one of the most singular titles among francophone publishing’s annual slew of autumn releases. Since then, the book has scooped France’s hallowed Prix Goncourt, tipped the million-copies-sold mark, been snapped up by French production company 247 Max for an upcoming TV series, and acquired at least seven new lives through translations into other languages.

Happily, English is the latest of these multilingual doubles, and, aided by Adriana Hunter’s hugely readable translation, L’anomalie’s anglophone incarnation is an absolute treat. For a book that ostensibly wears its intrigue on its sleeve – the back-cover blurb clearly states the outlandish premise of the exact same plane landing twice, three months apart – The Anomaly is also full of surprises.

By his own admission, Le Tellier is not a thriller writer by trade, but rather a meticulous dissector of narrative form and technique. As a longstanding member and current president of the famous Oulipo group – a literary movement founded on writing under self-imposed ‘constraints’, as memorably embodied by Georges Perec’s construction of a novel without the letter ‘e’ in 1969 – his true currency is cutting to the nub of what makes a narrative tick and systematically testing what happens when certain buttons are pushed.

According to Le Tellier, the book’s thriller element was originally intended as a wink to the conventions of the genre, with its central cast – a broad-spectrum selection of the 243 passengers on board the Air France flight that takes off from Paris to New York in March 2021 – inspired by go-to character types from the thriller repertoire. They include Blake, the Parisian restaurant-chain owner with a double life as an international hitman; Joanna, the high-flying black lawyer from Houston with a tragic family backstory; Slimboy, the rags-to-riches Nigerian Afropop star who dreams of performing with Elton John; and Sophia, the six-year-old New Yorker whose world revolves around her pet frog, Betty. Perhaps the strongest indicator that this isn’t your average thriller comes in the figure of Victor Miesel, the suicidal Z-list writer who, minutes before jumping from the balcony of his Paris apartment, puts the last full stop on a curious novel-cum-book of aphorisms entitled The anomaly, which becomes a posthumous bestseller and has more than a passing resemblance to the uppercase version in front of us…

In keeping with Le Tellier’s systematic approach to narrative, the book’s structure is pleasingly logical. The opening leg introduces us to the main line-up of characters – pre-duplication – each presented in separate chapters. The central section deals with the immediate aftermath of the duplicated flight’s emergence from US airspace in June 2021, exploring the American authorities’ attempts to manage the impending geopolitical storm and the scientific community’s frantic search for a theory to explain the seemingly inexplicable. And the final section examines what happens when the different members of the cast meet their doubles, forcing both the March and June versions to confront the fact that their lives, along with everyone and everything they hold dear, are no longer their sole preserve.

As has probably become apparent, this is a very clever novel. Each element is minutely calculated, crafted and researched, from the parodic play on genre and mise en abyme, to the theories proffered for the plane’s duplication, to the uncannily familiar portrait of our globalised, post-pandemic world. There’s even a chapter-long spoof of The Late Show with Stephen Colbert in the closing section, plus cameo appearances from Emmanuel Macron, Xi Jinping and Donald Trump. What makes the book so compelling, however, is that Le Tellier’s Oulipian precision is accompanied by a real power to stir the emotions and make our minds go places they may never have chosen to stray. In the final part of the novel, as we are a fly on the wall to successive encounters between the two versions of each duplicated passenger (without it ever being resolved who is the ‘copy’ and which of them can lay claim to being the original), it is impossible not to wonder how we would react if confronted with a second version of ourselves. Would we embrace them like a long-lost twin, or recoil from them like the cruellest of impostors? Is the person we were three months ago – or even three minutes ago – any more us, any less of an unknown quantity, than any stranger we might encounter on our travels? In a narrative world where everything is double, there’s little hope of finding a definitive answer. Yet if anything, this only makes the thought experiment cut deeper.

A month into 2022 is early to be talking about books of the year, translated or otherwise; but for my money, this one will take some serious beating.

Translated from French by Adriana Hunter