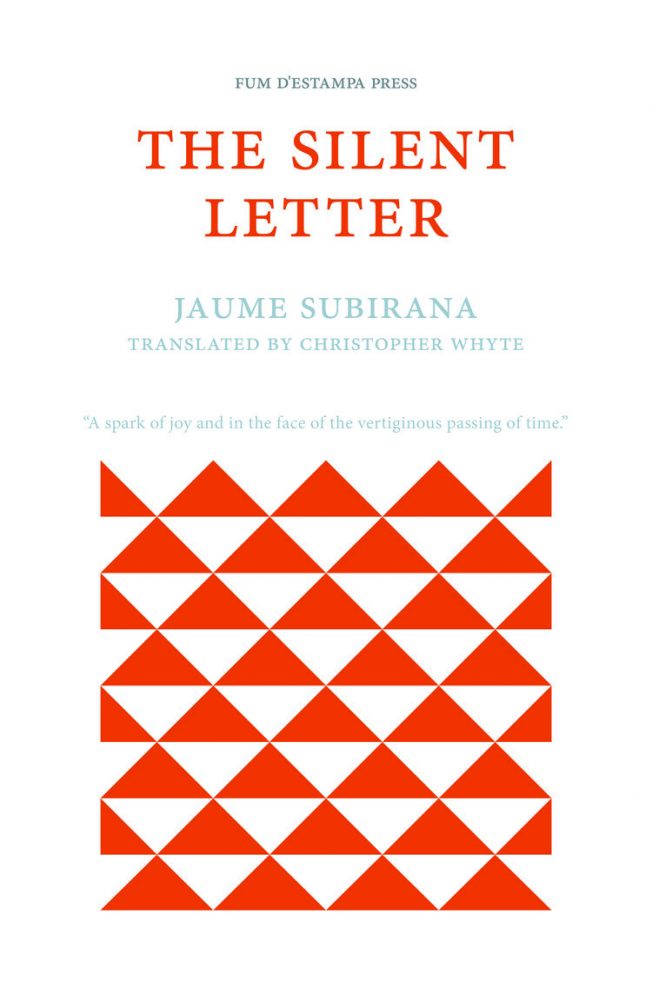 The Silent Letter, by Jaume Subirana, translated by Christopher Whyte, the latest release from Fum d’Estampa press, is a collection of stunning poetry in a bilingual Catalan and English edition.

Subirana’s poems carry a speculative edge, and in its entirety, The Silent Letter is the perfect reflection of Subirana’s astounding ability to unravel, carefully and very subtly, the minutiae of life. His discreet, brief, and incredibly patient poems – in Whyte’s attentive translation – call attention to the layers of beauty behind the seemingly insignificant elements of the day-to-day. Their words give prominence to parts of life that are often hard to pinpoint, hard to explain, and hard to even realise the importance of, until Subirana subtly and delicately leads us to see, and perhaps even begin to understand them.

The Silent Letter is divided into two parts. In the first Subirana explores themes such as, but not exclusive to, seasons, weather, and nature through brief poems that, while apparently sparse, capture microscopic moments or fleeting thoughts to create striking and vivid images. Part two of the collection carries many of the themes that appear in the first; however, here, Subirana explores ideas of memory and the passing of time. In each half of the collection, he illuminates the importance of small moments by expertly carving out each minimalist line; lines that cause the reader to stop, reflect, smile, and perhaps even hold back a tear. ‘Sketch’, a poem that evoked each of these reactions in me, appears in the second part of the book:

Despite its immediacy, this poem says so much. Subirana manages to articulate an acute and specific feeling, and invites readers to see things from a new, considered perspective. ‘Sketch’ is the perfect example of what Subirana so brilliantly does throughout The Silent Letter. While his precise lines appear at first glance to be somewhat brusque, they are most certainly not; behind every carefully selected word is a myriad of meaning. In short, Subirana says without saying. Retaining this illusion could not have been easy for the translator, Whyte, to carry over into English, yet he does so impeccably, recreating the semblance of simplicity beautifully.

The most striking thing about this collection then, is its silence. Subirana leaves so much unsaid, his poems surrounded by white space and the almost-empty pages filled with an unnerving silence. His subtle lines simply offer the reader a prompt with which to fill this silence, a space to fill with their own images, just as I did with ‘Sketch’. The Silent Letter is an astounding collection; delicate, simplistic, yet deeply profound. In so few words, Subirana manages to say so much.