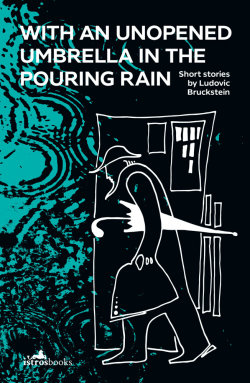 #RivetingReviews: Alice Banks reviews WITH AN UNOPENED UMBRELLA IN THE POURING RAIN by Ludovic Bruckstein

Ludovic Bruckstein was a Jewish-Romanian author and playwright who wrote in both Yiddish and Romanian. He grew up in northern Romania, in the village of Sighet, many of whose inhabitants fell victim to the atrocities of the Second World War and the Holocaust. Of Bruckstein’s family, himself and his brother were the only survivors. After living through these horrific events, and later escaping Communist Romania, Bruckstein began to write stories inspired by the people he’d met throughout his life.

Set in Sighet, With an Unopened Umbrella in the Pouring Rain is a beautiful yet heart-breaking collection of stories, in which Bruckstein captures the essence of community, family and togetherness that Sighet once displayed, but that was utterly shattered by the Holocaust. However, while the war and the Holocaust loom over the entire collection, they are never explicitly described. Instead Bruckstein tells beautiful tales of Sighet’s humble families; he tells us about their relationships, their work and their daily lives. Only in the last few lines of each story are we hit with the fact that the family that story has focused on was torn apart by the Holocaust. Having allowed us to enter the normal lives of these people, Bruckstein strikes us with the hardest of truths, made all the more horrific by the almost casual way in which the destruction to come is mentioned.

After the first few stories, the reader picks up on this pattern, which means that each new tale becomes filled with dread; as we read about these simple, honest, small-town folk, we know what is coming. We are spared the horrific accounts of the concentration camps; but we still know the horrifying fate that awaits these families.

Bruckstein’s prose is warm, simplistic, beautiful, and humble, much like the families he introduces us to. He writes with the utmost care and humility, making for – in spite of the themes – a touching collection. With an Unopened Umbrella in the Pouring Rain is utterly devastating, not for what it says, but for what it does not.

WITH AN UNOPENED UMBRELLA IN THE POURING RAIN

You can read an extract from With an Unopened Umbrella in the Pouring Rain in The Romanian Riveter.