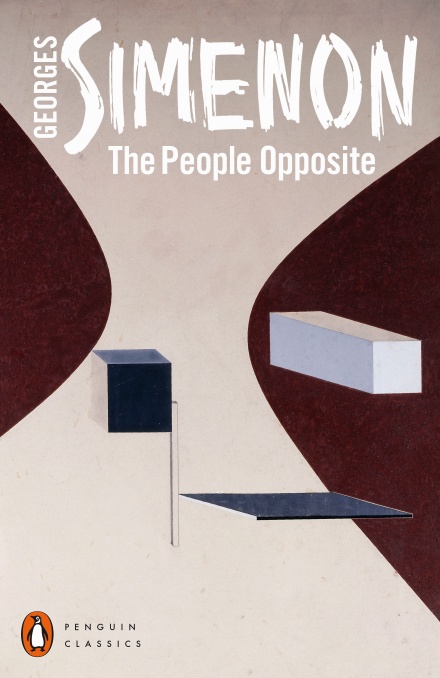 #RivetingReviews: Max Easterman reviews THE PEOPLE OPPOSITE by Georges Simenon

Georges Simenon is considered by many to be one of the greatest writers in French of the twentieth century; The People Opposite is one of his earliest literary novels and was written in 1933 after a trip as a reporter to the Soviet Union, where he visited the Georgian Black Sea port of Batumi. This is where the novel is set and, given recent events in nearby Ukraine, the picture he paints of Stalinist Russia at that time is remarkably apposite. He wrote a preface to the book, which, he says, he decided to do for the first time following ‘weeks of being crushed by the Soviet system’, in order to underline that ‘the ‘people opposite’ all exist, without exception. This is not to claim, he continues, that they all exist in the same place. But they do all exist.

In the novel the Turkish consul in Batumi has died under mysterious circumstances, and his replacement is Adil Bey. Bey has lived a life: he fought in the Great War and then again in support of Kemal Atatürk’s new Turkey, but these experiences have in no way prepared him for the exigencies of the confined environment in the Soviet Union. He’s at a loss to understand why he is a curiosity to the people of the town: ‘Men and women constantly brushed up against Adi Bey, staring at him brazenly…they walked past again and again…bursting out laughing.’ Nor can he work out why he’s an object of scorn to the Italian and Persian consuls – the only other consuls in Batumi – and why the Turkish official from Tbilisi leaves on his first night, taking most of the contents of the consulate with him. And where are his staff? They, too, have vanished.

Bey’s only help and support, such as it is, comes from his secretary, Sonia: ‘…a slip of a thing, yet she had a calm and self-assured strength that panicked the consul.’ Sonia lives in the flat opposite with her brother Kolin and his wife. He’s the local OGPU (state security) official and has presumably appointed Sonia to keep an eye on Bey, who speaks no Russian. Her job is to interpret for him at the consulate, which is besieged by refugees and displaced persons, all buried under the oppressive Soviet bureaucracy. But his every approach to the department for foreign nationals, his every request, however urgent, but always dispassionately translated by Sonia, elicits the same response: ‘“We’re waiting for instructions from Moscow”’ – a  response anyone who has ever visited the Soviet Union will recognise instantly!

Gradually, but inexorably, Bey becomes more and more dependent on Sonia, as he comes to realise that he himself is as ‘imprisoned’ as the local people:

‘You carried your loneliness everywhere with you … it was a sort of protective cloud, and you walked along inside it, with a closed face. He was just like everyone else now … he watched people with the suspicion of a lone animal.’

He watches Sonia in her room opposite the consulate – a room shared with her brother and sister-in-law – as both his work and his private life draw the two of them closer, and yet somehow keep them defensively apart. They begin an affair, but he cannot resist challenging her acceptance of the injustices he sees in the Soviet system. She always has a bland, evasive response:

‘Why did she take this categorical attitude? It would have been so simple to be friendly, to speak openly, to say what [she] thought.’

Only slowly does he recognise the reality of why she is as she is, even with her ‘lover’. And this realisation leads to the harrowing finale as the curtain comes down on his time in Batumi.

One of Simenon’s central themes in his books is the essential humanity of even the isolated, abnormal individual, and the sorrow at the root of the human condition. This is, as here, portrayed in language that is as simple as it is perceptive – and perfectly rendered into English by Siân Reynolds. The tensions of Bey’s relationship with Sonia are those that exist between every Soviet citizen and the ‘system’.

The People Opposite is Simenon’s most obviously political novel, something he sought to defend in his preface:

Which, let’s face it, encapsulates la condition humaine (pace Balzac) as succinctly as anything I have read elsewhere!

Translated from the French by Siân Reynolds