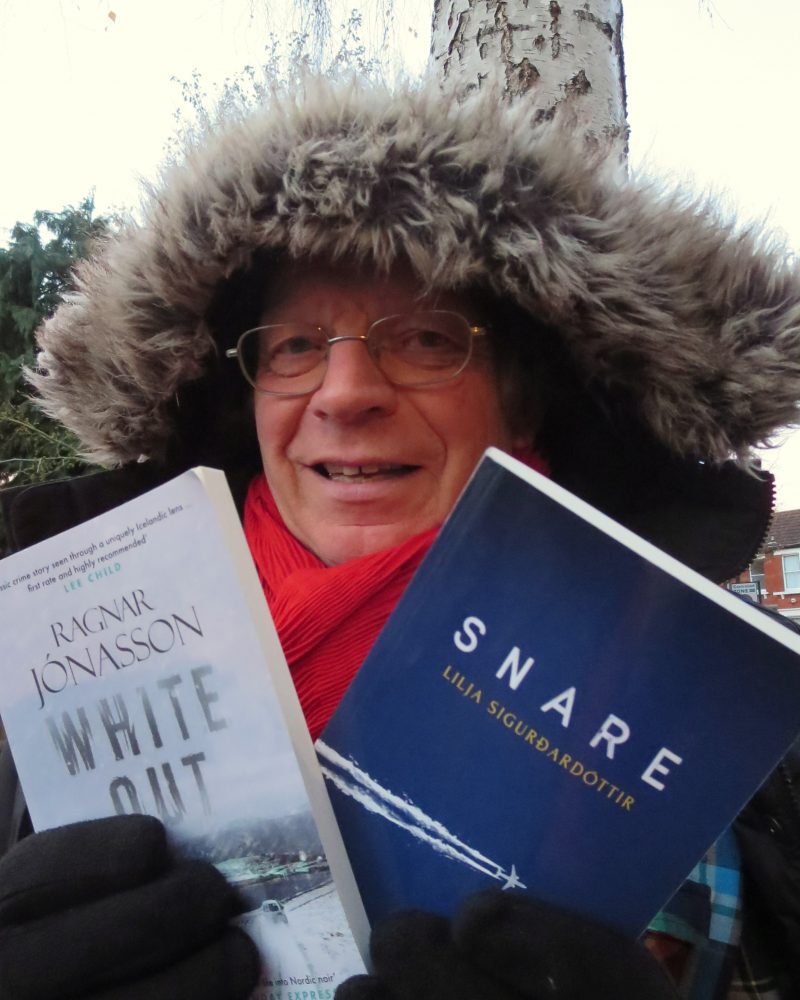 Ari Thór Arason is back in this sixth novel in the Dark Iceland series; back in his old job in Siglufjörður in the far north, having failed to get promotion to inspector; back with his old boss Tómas, who’s been sent north to investigate a suicide that might not be a suicide after all; and back with his girl-friend Kristín. But things have at least moved on there: she’s now eight months pregnant, prone to inexplicable sudden mood changes … but an inexplicably mild reaction to Ari Thór’s suggestion she join him to – probably – spend Christmas away from home while he and Tómas investigate the death of a young woman.

There is, of course, a mystery here: not just a did-she-jump-or-was-she-pushed mystery, but the fact that her mother and younger sister died years before on exactly the same spot: the cliffs below the lighthouse in the abandoned village of Kálfshamarvík. The only house still occupied is where the woman was staying and where she and her family once lived … with three other people who are still there now. There’s the brother and sister who both have their secrets: Óskar locks himself in his room every afternoon, where he can be heard talking … but to whom? Thóra harbours bitter memories of someone who wrecked her life years previously:

She knew that if her studies in Reykjavík had not ended so calamitously, she could have been a happy wife and mother. It was all down to one vile man … she still kept the obituaries … keeping alive her virulent hatred for him.

Then there’s Reynir, the home-owner, a wealthy and well-known businessman, who, curiously, doesn’t own a PC even though there’s wi-fi in the house. And Arnór, an awkward, withdrawn youngster way back when, now a confident and outgoing farmer and keeper of Reynir’s horses, who lives just down the road. What does he have to hide? If the dead woman, Ásta, jumped, what brought her back to Kálfshamarvík after all these years to do it? And if she didn’t, which of these four pushed her? The questions pile up as Ari Thór and Tómas weave their way back and forth along the snow-covered roads and tracks of this deserted landscape. The pressure is on to get an answer, something that afflicts the Icelandic police as much those anywhere else:

This is going to be worth a few brownie points – an arrest on the second day of the investigation. And considering the circumstances, nobody’s going to give us a rap over the knuckles … We’ll let [ ] spend the night in the cells. That might even encourage him to come clean.

Ragnar Jónasson weaves his customary deft path through the twists and turns of this not so Christmassy story. I didn’t know till now, that he had translated fourteen (!) Agatha Christie novels into Icelandic before he put fingers to keyboard on his own account. And having said in my earlier review (of Nightblind), that that plot had nothing of the unbelievability – for me, at least – of many of Christie’s stories, I did feel at one point reading Whiteout that it had too much of the ‘agathean’ about it … my credulity was coming under a certain amount of strain. However, Jónasson recovers his poise and all is well once again.

I have made my first visit to Iceland since that earlier review, though not, I regret to say, anywhere near Siglufjörður. Reykjavík is delightful but startlingly ordinary by comparison with what Jónasson describes. His great strength is not only that he can evoke the beauty as well as bleak harshness of the Icelandic far north; but he so cleverly strips back the veneer of normality of his characters, whose lives are played out against this unique landscape, to reveal the simmering tensions in their lives, without ever needing to spell out exactly what those tensions are, until the moment is just right. Reading a Ragnar Jónasson thriller can be quite exhausting … though in the pleasantest possible way.

Translated from the Icelandic by Quentin Bates