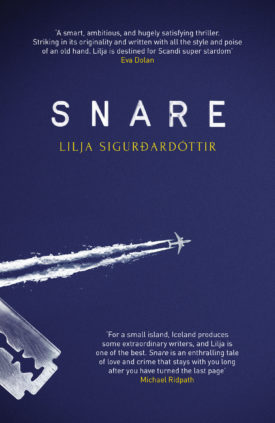 Orenda books would seem to have bagged yet another winner in another Icelander, Lilja Sigurðardóttir: this is her first novel of a new Reykjavík Noir series and it’s a refreshing change for a reviewer (or, at least, for this reviewer) of crime thrillers, to come across one that doesn’t involve a dysfunctional policeman, or indeed policewoman! In fact, there’s not a cop in sight … instead, that particular role is filled by a customs officer, Bragi. Not that he, and the other main characters, are without their problems: Bragi’s wife has Alzheimer’s and is confined to a residential home, where he suspects, but can’t prove, that she’s being abused. He wants her out, but can’t afford it. Moreover, he’s facing repeated calls to retire, which he steadfastly refuses to agree to … because he has a mission, which is destined to make him the nemesis of Sonja, a single mother, with her own set of social and personal issues. She’s divorced, as a result of being caught in in flagrante with her lesbian lover, Agla …and so has lost custody of her young son, Tómas. He lives with his father, with whom she is locked in an ongoing custody battle. As if that were not enough, her lover won’t admit to being gay, so the relationship is more often off than on. And Agla is a banker, who also has a nemesis, in the form of the Icelandic Special Prosecutor, who’s investigating the banks that brought down the country’s economy. Agla and her colleagues are suspected of illegal money transfers, but she reckons they can see off the charges:

I was good at what I did. There’s no way it can be traced. And as long as it was an ordinary deposit … and as long as neither of us knows how the money made its way back [to Iceland], there’s nothing to be worried about. Is there not …? Ah, the hubris.

So, are you still with me … ? Yes, it’s complex, but which good thriller isn’t? And, after all, how unusual these days are fraudulent bankers, gays, single mothers and people with a demented partner? An everyday story of urban folk, then. Well, not quite … because Sonja is penniless and has been ‘snared’ by her divorce lawyer (a bent lawyer – to add to the list!) into trafficking cocaine into Iceland. Which, of course, is where Bragi, the customs-man, fits into this dark, Icelandic mid-winter picture.

Sonja is very good at smuggling: and she also has her own little scam going, to rip off the lawyer who has ensnared her: a way to get free. And as the book opens, we learn how her schemes and stratagems have so far kept her out of the clutches of the customs-men…but Bragi has an eye and a nose for ‘mules’:

He zoomed in closer as she took her place by the carousel. She stood completely still … then a sudden, almost invisible shudder ran the length of her body. It was so subtle that if he had not been concentrating it would have passed him by … but she definitely shivered … at the moment her case emerged though the hatch.

This is a story, or in fact, four stories, adroitly woven together with a wealth of fascinating, but never distracting, detail about Icelandic life and customs (if you will forgive the pun), like Bragi’s penchant for guillemot eggs. It’s set against the aftermath of the 2008 banking crash, in the run-up to Christmas, with Iceland swathed in its long nights and truncated days. It’s written very much in filmic style (and admirably translated by one of the master interpreters of Icelandic, Quentin Bates), switching from one story strand to the next in rapid-fire scenes – which makes it easy to set the book aside for a few minutes as you make the next cup of coffee or re-fill your wine-glass. However, I must admit that I got confused with the timeline about two thirds of the way through … so I wasn’t sure exactly where some scenes were taking place.

But Snare is a great read and the finale is both shocking and unexpected … a Wizard-of-Oz ending, without the laughs. Terrific and original stuff, with some keen-sighted and depressing reflections on Iceland’s place in the world:

Iceland is just a pawn … on a global scale, just a village … aside from all the overblown rhetoric about culture, history and language, Iceland [will] never be much more than a remote outpost.

Translated from the Icelandic by Quentin Bates