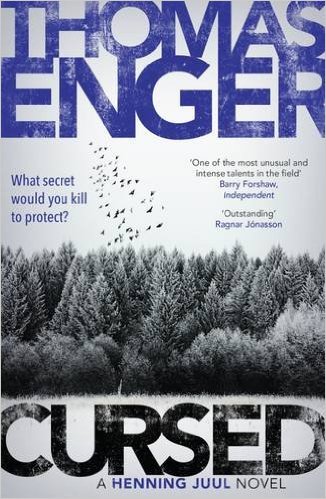 In Thomas Enger and his translator, Kari Dickson, Orenda Books have once again come up with a winning combination. Enger is a true original on the Norwegian scene: his protagonist in his five noir novels is not the flawed, troubled police officer that we may have come to expect from the genre, but, like himself, a journalist, Henning Juul. Mind you, Juul does have his problems: an alcoholic mother, psychological trauma stemming from his son’s death in a fire and the nagging suspicion that this disaster was a warning from the man he was investigating at the time.

“Sometimes the nights went on forever: he couldn’t close his eyes without reliving it all – the smoke billowing towards him … Jonas’s screams from the room engulfed in flames … [he was] unable to understand how you could hold your son in your arms and still not be able to save him.”

On the face of it, a journalist who takes risks, goes several rounds – figuratively and literally – with the worst thugs in Oslo, and persists in investigating the man who may have killed his son, invites comparisons with Stieg Larsson’s Mikael Blomkvist; and though Juul, like Blomkvist, digs into corruption and the grimy underworld of his capital city, the similarity ends there. The focus in Cursed is not on violence towards women, but much more on the deep, dark secrets surrounding corruption and murder, and on Norway’s less-than-pure recent history.

So, while Juul pursues the corruption, his ex-wife, Nora – also a journalist – is following up the disappearance of one Hedda Hellberg, whose ordinary, if gilded, existence now looks quite otherwise. She was supposed to be on a retreat in Italy – but never booked it, never left Oslo, vanished at the airport and is apparently connected with the shooting of an old man in a forest in Sweden. The two investigations collide, and Henning and Nora find themselves working together again, as it becomes clear that the old man’s death is connected to some very nasty people among the country’s glitterati. And all is made more difficult by the fact that Nora is pregnant by her new boyfriend, who just happens to be one of Henning’s work colleagues – another psychological blow for him to cope with.

“They sat in silence for a few moments, each with their own thoughts … ‘What about Nora?’ Henning heard himself ask. Iver wet his lips. ‘She’d perhaps hoped for, well, a bit more enthusiasm on my part.’ ‘It’s like having a gun to your head,’ Henning said … ‘Being a Dad.’ Iver nodded, but Henning could see he didn’t understand what he meant.”

Cursed is so much more than a thriller, than just another Nordic noir. Certainly, the mystery builds and deepens and draws you inexorably in, but the personal stories, the domestic tensions, have their own dimension of suspense that counterbalances the criminal element and some very unpleasant events from decades ago.

“Henning thought to himself that Fritz Hellberg’s actions after the war were immoral. But the company could survive that in this day and age; the family could claim not to have known anything about it … But Unni hadn’t thought of it that way … she was blinded by hate. So she had killed two birds with one stone …”

Thomas Enger writes with verve, colour and a pace that builds to a thrilling climax, cleverly and deftly weaving a complex of fictional elements into some uncomfortable details of his country’s history. Highly recommended!