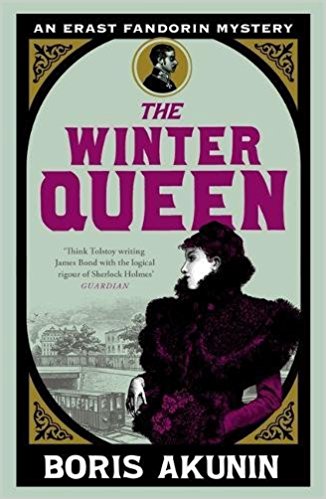 “On Monday the thirteenth of May in the year 1876 … numerous individuals in Moscow’s Alexander Gardens unexpectedly found themselves eye-witnesses to the perpetration of an outrage which flagrantly transgressed the bounds of common decency.”

Thus begins The Winter Queen – reminiscent, perhaps, in style and atmosphere of Baroness Orczy’s Scarlet Pimpernel. And indeed there are some similarities: sudden death, a penchant for disguise, a spider’s web of deceit and a cast of high and low life alike. But there the similarity ends: Boris Akunin is no copyist. He originally found fame as a translator and specialist in Japanese literature and as an historian, but turned to writing crime thrillers after watching his wife read one such on the Moscow metro, wrapped in brown paper, so people couldn’t see it was pulp fiction. He determined to create a more high-brow, literary version of the genre – with huge success: he is now a towering figure in Russian crime fiction.

The Winter Queen is the first of his crime novels, set in Imperial Russia and featuring Erast Fandorin, a young, impoverished trainee detective – a “collegiate registrar” in the terminology of the time. Fandorin is not your typical dashing police hero: he has blue eyes, black hair, “long, girlish eyelashes” and wears a Lord Byron corset to make him look slimmer; but he also speaks several languages fluently and shows initiative and an ability to work alone – something which persuades his superior, Superintendent Grushin, to take him off report writing and send him out to investigate a suicide. What follows is a wonderful tale of derring-do, involving nihilists, a gambling, duelling count, a beautiful and manipulative vamp and an English baroness and philanthropist (and more …), as Fandorin criss-crosses Russia and Europe – as far as London – in his attempts to unravel the mystery of the “Azazel”. The dénouement is as unexpected as it is shocking – and is to affect Fandorin for the rest of his life (across thirteen more novels, regrettably not all of them yet available in English – but getting there!).

Akunin writes with flair in an exemplary re-creation of the high Victorian style, which does not, however, eschew the earthy or the humorous; all of which is perfectly translated by Andrew Bromfield. The femme fatale is “a veritable Cleopatra with a dense mane of hair and matt-black eyes, her long neck set in a haughty curve and a slight hint of cruelty evident in the wilful line of her mouth”, whilst one of Fandorin’s police colleagues is “a scrawny, lanky veteran with a crumpled face that looked as though a cow had been chewing on it”. He weaves his plot lines with just the right amount of suspense to leave us wondering, yet always to surprise us: even the identity of the Winter Queen is who we would least expect. And every so often, we are jerked out of the fictional narrative by a historical reference that reminds us that nineteenth-century Russia maybe wasn’t quite as backward as we might have believed. Fandorin’s new boss, Brilling, tells him: “It has only just arrived from America … there is an inventor of genius there … thanks to whom it is now possible to conduct a conversation at a considerable distance … the sound is transmitted along wires like telegraph wires. In the whole of Europe there are only two lines: one has been laid from my apartment to the secretariat …” So Brilling has a telephone, but as he ruefully admits, “[I] can’t quite get the hang of the samovar.”

Boris Akunin, a Georgian by birth, is one of the few Russian writers of our age to have “broken through” in translation into English. The Winter Queen is a terrific read and a perfect example of what we are no doubt missing ten times over because so little modern Russian literature is available in our own language.

Translated from the Russian by Andrew Bromfield