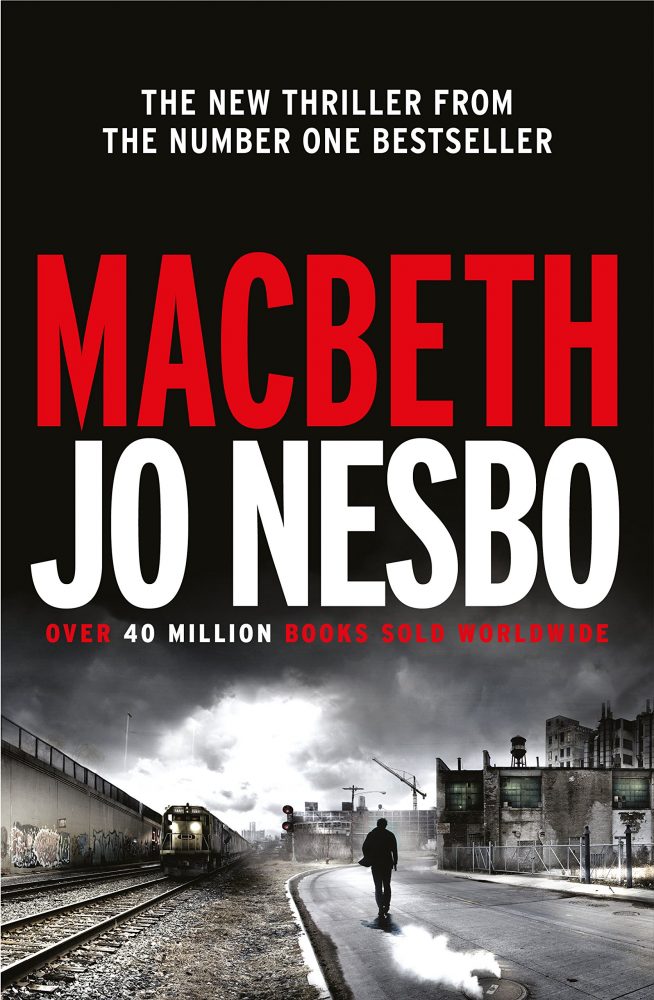 The Hogarth Shakespeare project is bringing us a whole series of modern authors’ re-versions of Shakespeare’s plays, from Margaret Atwood’s Hagseed (The Tempest), through Edward St Aubyn’s Dunbar (King Lear) to Howard Jacobson’s Shylock is my Name (The Merchant of Venice).

Jo Nesbø’s Macbeth is subtitled Blood Will be Paid for in Blood. The Scottish play has long been my favourite in the canon, so I was particularly interested to see what the king of noir would make of the darkest but also the most intriguing and in some ways most puzzling of Shakespeare’s tragedies … certainly the one nearest in storyline to a modern crime novel.

The ambivalence of Macbeth’s character has certainly long inspired and challenged directors: monstrous murderer or tragic ditherer? The former only needing the approval and final push from Lady M to launch him on the path of insatiable ambition and keep him there, committing foul acts of treachery. The latter, a man ‘…too full o’ th’ milk of human kindness / to catch the nearest way’ and thus driven to destruction by a power-hungry woman seeking a passport to what she cannot achieve alone. Perpetrator or victim? These are, of course, two extreme views, but players and academics alike have long argued over Macbeth’s motives … and reached no majority conclusion. Nesbø seems to lean towards the second interpretation, with Lady Macbeth, known simply as ‘Lady’ (and not his wife, but his lover and owner of a high-class casino), playing an orchestrating role to Macbeth’s as leader of a paramilitary SWAT team. Duncan is chief commissioner of police, Malcolm is his deputy and Macduff, known simply as Duff, heads up the narcotics unit. The book is set in a mysterious and anonymous northern town in 1970 (there is a clue to this exact date), where it almost always rains and almost everyone is out of work. Half the town, Macbeth included, is also addicted to ‘brew’, a narcotic manufactured by the local drug lord, Hecate, for whom the three witches act as henchmen and general gofers.

This, for me, is where things go slightly awry. The witches – the Weird Sisters – are a key element in the play; but the role of Hecate is one that has been much disputed by academics and directors, as her scene seems not to be by Shakespeare, but possibly by Thomas Middleton. I have seen the play a dozen times, and the scene where Hecate appears has been cut every time except one. In it, she castigates the Weird Sisters for acting without her authority, whilst enjoining them to do as they’re told from then on and lure Macbeth further into the pit. It seems to serve no useful purpose except to suggest the world of the supernatural is as out of control as that of humans.

The more important point behind all this is, what exactly is the role of the witches? For me, they have always seemed to be a device to externalise the conflict between ambition and conscience in Macbeth’s psyche. Their pronouncements are as open to interpretation – and misinterpretation – as a modern horoscope, and are a crucial factor in Macbeth’s growing certainty that he is untouchable; which is his ultimate downfall. The witches’ role in the book – I feel – somehow changes the emphasis on his inevitable and inexorable descent; as Angus says: ‘…now does he feel his title / hang loose about him, like a giant’s robe / upon a dwarfish thief’. Nesbø’s witches seem to have done little to engineer this degradation.

That said, this book is a terrific read: much of the pleasure comes from seeing how a top crime writer weaves new robes out of the old, whether or not one agrees with every result! And Nesbø does come up with a very original ending. I think you’ll be fascinated.