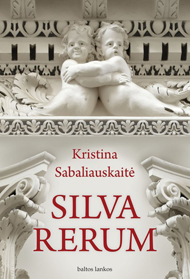 There’s something rather daunting about reviewing a book in its country of origin, and knowing the author personally and the fame she enjoys. Cards on the table: I’m in Vilnius as I write this, know Kristina and have only been able to read extracts from Silva Rerum as it’s not yet published in English. So let’s call this an appraisal rather than a review.

The four Silva Rerum novels were published here in Lithuania between 2008 and 2016. Similar to the ambition and impact of Hilary Mantel’s Wolf Hall, they follow generations of a family of minor gentry across 150 years. They’ve been reprinted several times and have won every prize going. ‘Silva Rerum’ means ‘forest of things’ in Latin but is also the name given to the ‘scrapbook’ popular here in the seventeenth and eighteenth centuries, filled with family memorabilia such as journal entries, recipes, bills and pictures. For Kristina these are precious records of domestic life rich with ideas and stories. As an academic, art historian and journalist, her research was rigorous. Luckily for us she is also a gifted novelist.

Each Silva Rerum novel features real events; the great floods, wars, fires and plagues taking place in the Grand Duchy of Lithuania from 1659 to 1795 form the backdrop to the Narwoysz family chronicle. In the first novel, the elderly patriarch Jan Maciej lives with his younger wife, Elzbieta, and their precocious ten-year-old twins, Urszula and Kazimierz, on their country estate. Their beloved cat has just died:

Urszula was curious to know if life depended on the heart beating or on the fact that a soul resides in the body, while Kazimierz … was interested in knowing if perhaps it might be possible to dissect Maurycy, since he was after all already dead, and see how everything was arranged inside him.

The erudite and mischievous narrator – a delightful balance sustained consistently across all four novels – thus lays out the future paths of adult Urszula and Kazimierz: he leaves home for the European metropolis of Vilnius to study, and Urszula to join a convent. Science and religion, body and soul, life and death, love and loss: Silva Rerum’s scope is vast, but you learn and laugh a lot too. War dominates SRII and the plague kills two-thirds of the population, so how will the family line continue? In SRIII, Vilnius is devastated by two great fires and the Jews are blamed. Mysticism, corruption, mistresses and Judaism are themes here.

The final novel (1770–1795), Silva Rerum IV, is dedicated to the ruptures in the family and the country under the Enlightenment and before the partition of Poland and Lithuania. Franciszek Narwoysz, Jan’s great-grandson, is a Jesuit priest, freemason, mathematician and philosopher at Vilnius University. He travels all over Europe, meeting other intellectuals and aristocrats, gathering ideas – and telescopes – to bring home. The light and humour in this opening passage are soon overshadowed by terror and violence:

Franciszek used to feel the existence of God most acutely while looking at the starry vault of heaven, and felt the glory of the luminous heavenly bodies, as shameful as it was to confess, but as he remembered from his childhood, best and most sublimely, when relieving his bladder … and, with the rush of an echoing stream, feeling relief, he lifted his head to the black sky, through which shone, as if through God’s colander, the eternal light of the stars … In the sky over Lithuania it is the brightest star, it pulsates, twinkles without ceasing as if it were a human heart and just as changeable, it seems, it even changes colour like a heart its affections, we will no longer be here but it will still be there flickering in the heavens.

In this sublime passage, the sentences are as long as rivers, winding their ornately baroque path across the page, full stops sprinkled like rare stars. Here in Vilnius I can see how fervently Lithuanians love their Baroque interiors, buildings and literature. Silva Rerum is baroque: one reason Lithuanians love these novels; but it is also because they reflect the history of turbulence and transformation, clearly resonant today, and for us too in the rest of Europe.

When I visit Vilnius University with Kristina, I see the reading room where Franziskus studied mathematics and the telescopes he brought back from his years in London. For Lithuanians Kristina has brought back to life the creative fervour of a multilingual, multi-cultural country once so central to Europe, today slowly clawing its way back. No wonder this patriotic page-turner, with its lush language and bodice-ripping nobles, is so popular here in Lithuania. But wouldn’t it be great if we could all read Silva Rerum?