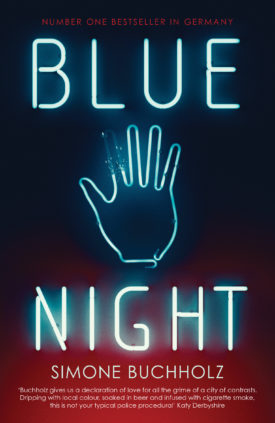 ‘Chastity Riley’ is not the first name you’d expect for the protagonist of a German crime novel. In fact, you’d rarely expect to read any German Krimis with female leads and written by women. But this is what we have in Blue Night, the first in the popular German Chastity Riley series to be translated into English. Simone Buchholz is the author, Rachel Ward is the translator and the ever-pioneering Karen Sullivan of Orenda Books is the publisher.

The splendid ladies of Nordic and Scandi Noir may dominate English language bookshelves (and Orenda has supplied many of them), but women writers from the rest of Europe are rarer. Zoe Beck, Charlotte Link, Nele Neuhaus, Petra Hammesfahr, Monika Geier, Karen Duve and Ingrid Noll are on my personal list of German crime writers we should know better – not just because they are women but because they can stand tall beside their male Krimi-Kollegen Friedrich Ani, Volker Kutscher, Friedrich von Schirach, Jakob Arjouni, Frank Goehre and Franz Dobler – also personal favourites. (If you have other recommendations do tell me!)

I read German and know Germany well, but Simone Buchholz is a new discovery for me. Blue Night is the 6th in the series featuring Public Prosecutor Chastity Riley who, like her creator, lives and works in the great Hanseatic city of Hamburg. Hamburg is definitely ‘Northern’ and ‘Noir’ enough to join the Northern Noir brigade and it can certainly boast enough crime if we are to believe Blue Night. The hard-drinking, expletive-spraying Chas Riley finds herself investigating mafia-run organised crime and drug and prostitution routes stretching from Russia across Germany and Eastern Europe. The beautiful red-brick, leisure-loving city of Hamburg, with its joggers, bicycles, lakes and sailboats, also one of the largest harbour and container ports in Europe, has distinctly unattractive sides, with its infamous red-light district, corruption and gangsters. The grey and gloom seem to suit Chastity’s (aka ‘Chas’) mood:

The city slips past the corners of my eyes. It’s like somebody intentionally thought up the dirty grey of advanced February but then just spewed it out instead of putting their heart into it. Outside, it’s so sunless the streetlamps are on the point of coming on but not quite dark enough for them to make it. A lousy fake of a day.

In spite of speaking and looking rough and tough themselves, Chas and her crime squad colleagues, Georg Faller and Vito Callabretta – to name the two most colourful – are ultimately lovable good cops trying to protect their city from the seedy lowlife. Although the lowlife has, as depicted in the novel in the person of Albanian gangster Gjergj Malaj, risen to join Hamburg’s untouchable highlife – and thereby hangs the tale. Malaj has been Faller’s personal obsession and thorn in the side for decades (as the rather clunky flashbacks explain) and we gradually discover why. The task for Chas Riley is, not only to track down Malaj but to protect her Robert Mitchum type boss, Georg Faller, her father-substitute after her own beloved father’s death. He was American, hence the name ‘Chastity’.

Chas leads a lurching zigzag kind of life with her boyfriend Klatsche, who works on her locked-up soul and now runs the Blue Night bar but used to be a popular locksmith (!). Chas longs for love but is too tough to ask for it. So far, so predictable as hardboiled crime novels go. However, Simone Buchholz has an intense engagement with the social and cultural sides of the city and of her characters. Women too are in the foreground, not as often in crime novels, only as victims of rape and abuse. Blue Night also has great sparkling energy, humour and stylistic verve. The short, rhythmic sentences read like American song lyrics and individual scenes are played out as mini-dramas with multiple dramatis personae. The story itself is gripping and pacey. Simone Buchholz’s homage to Raymond Chandler and Jonny Cash is – I have it on the best authority – affectionate and deliberate. Then there’s the interplay of author and translator, like musicians in the same band. Rachel Ward performs her riffs and responses in perfect harmony with bandleader Simone Buchholz, creating an all-female tour de force, the English expressions perfectly matching the rhythm and blues of the German.

As I leave…. the day’s clocking off too. A deep sigh falls over the city. The streetlights now have a right to be on and the asphalt relaxes. I walk along the Alster and the canals that take me to the port. Walking beside water always seems so much easier than taking some road. The water moves with me, sweeps me along. And sweeps out my messed-up head.

Hamburg is a great location, a city I once knew well but feel I now know much better thanks to the native knowledge of Bucholz, Riley, Ward and Co. Contemporary German crime writing is traditionally city based (cf. Koeln Krimi, Berlin Noir , and so on), and often doesn’t reach out to readers beyond its borders, but what strikes me reading Hamburg’s Crime Queen Simone Buchholz, is that Blue Night not only provides a vivid picture of Hamburg itself and of its unique location in Europe, but throws in some universal home truths too.

Translated from the German by Rachel Ward