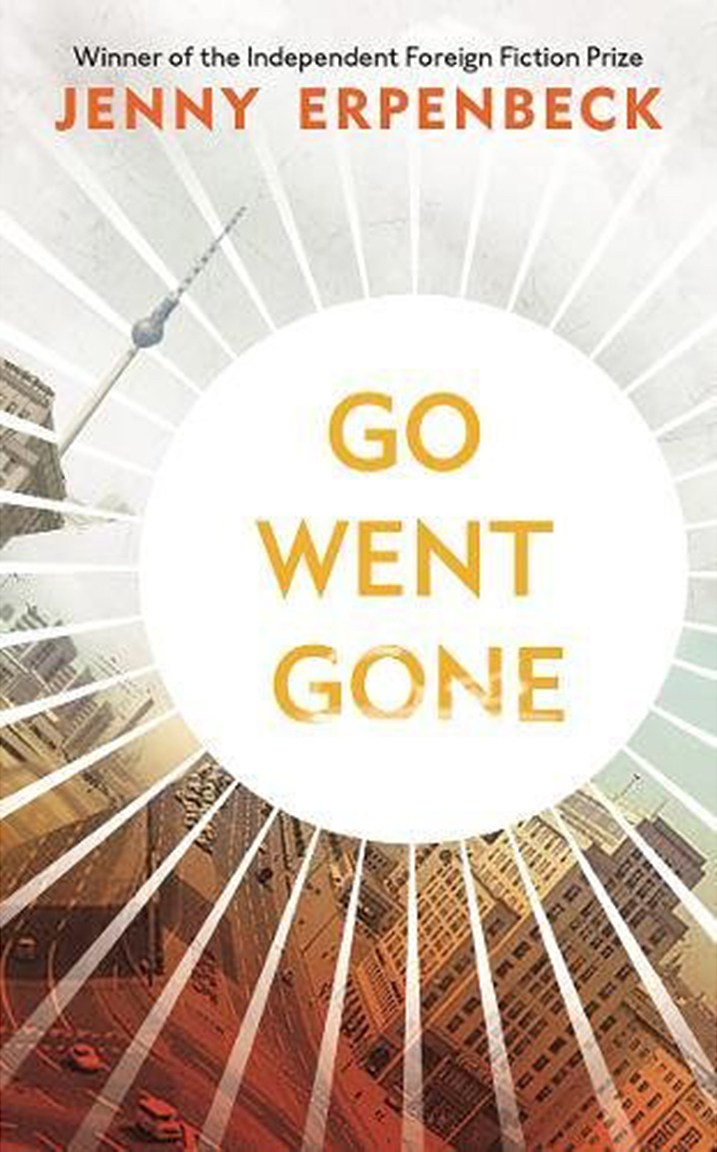 Awad, Rashid and Osarabo. Three names, three individuals, three protagonists in German author Jenny Erpenbeck’s new novel. Three men from Africa of the many thousands who flee their countries, endure loss of family, friends, jobs, violence, danger, boat trips across the Mediterranean; who survive against all odds and arrive in Germany, in Europe – to confront what? Hostility, unfamiliar customs and bureaucracy but also, occasionally, great human kindness. The other protagonist in Jenny Erpeneck’s novel – in addition to Awad, Rashid and Osarabo and the others – is a retired, widowed and lonely Classics Professor, Richard, who lives in Berlin and becomes interested in the refugees’ plight, initially out of intellectual curiosity and then out of genuine compassion.

Richard was born – and nearly lost – in ‘the mayhem’ of second world war Germany. Through fate and geography, he becomes East German. He marries (happily), is made Professor at the Humboldt University and lives through the fall of the Berlin Wall and German Unification in a rather detached way. Richard is no firebrand radical, no social reformer; he has thought and taught about life and living. It is his personal universe of ideas that makes his journey so illuminating – for himself and for us. He had never really engaged with contemporary issues before but, true to character, he conducts his first visits to the refugee protest camp at Oranienburg in Berlin as an academic research project, observing from a distance, reading up on the refugees’ countries, formulating his questions (he starts to interview them) and then writing up their stories at the end of the day. He is meticulous, caring but unsentimental – and this is a refreshing and liberating approach in a novel which could so easily have become a treatise on the burning issues of our times: immigration, racism, nationhood, identity and borders. In the same way Richard once spent hours compiling shopping lists or mending his lawnmower, he now thinks about the geography, history, language and human concerns of the individuals he meets and spends those hours poring over European immigration legislation.

Jenny Erpenbeck’s novel Gehen, Ging, Gegangen was published to enthusiastic acclaim in German in 2015. She is already widely acclaimed in English too, thanks also to her immensely creative and dedicated translator Susan Bernofsky: together they won the Independent Foreign Fiction Prize in its final year of existence, in 2015, for the exquisite End of Days. Go, Gone, Went, published this month in English, is unlike her previous novels which are often historical, interwoven stories. This novel engages with Germany’s and Europe’s contemporary politics and with attitudes to our shared European number one issue, immigration. Awad’s, Rashid’s and Osaroba’s shocking and moving stories – and those of their fellow refugees – were gathered by Jenny Erpenbeck herself as she became involved in helping refugees in Berlin. But in her exquisite novelist’s way she makes the fictional Richard the story-teller and story-gatherer. He listens to them, gets to know them as individuals and friends and gives them names, literally voices to the voiceless. He makes them visible.

Richard is soon helping Awad and Co to learn German, driving them to lawyer’s offices, inviting them home, helping Osarabo learn the piano – and much more. He has found a purpose. At Christmastime he is alone and invites Nigerian Rashid (once a successful mechanic with a family and his own business) to spend the day with him. There they are, two friends, one Muslim believer and one Christian atheist, gathered round a Christmas tree, telling stories. At this point I wept – Rashid’s story is heart-rending. Richard sits and listens: He knows that this story Rashid is telling him is something like a gift.

The novel’s title, with the word ‘gehen’ (‘to go’) is a basic but complex word in German. It is an irregular verb, it can have suffixes removed, prefixes added, it denotes movement. The refugees are given free German lessons; “Gehen, Ging, Gegangen” – “Go, Went, Gone”– is their beginner’s attempt to learn basic German. It is also a description of the lives of individuals in flight and constantly on the move.

Go, Went, Gone is profoundly moving experience for us as readers – and thanks to Richard’s (Jenny’s!) in-depth research – it is also erudite and informative. What has he learned, she learned; what have we learned by the end of the novel? Quoting Seneca, Ovid and Diogenes – as he does – Richard muses on the equality of man and the ephemeral natures of our individual lives. Our moral and historical obligations to support one another, and quite personally, that the things I can endure are only just the surface of what I can’t possibly endure.

Translated from the German by Susan Bernofsky