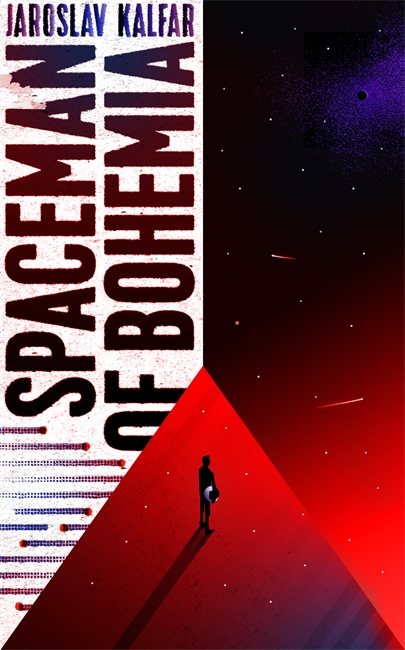 This is a remarkable debut novel by a young Czech writer and, I predict, only the first of many more remarkable novels by Jaroslav Kalfar. He writes in English, is not yet thirty, was born and brought up in Prague, moved to the USA aged fifteen where he learned English, then studied English literature and philosophy. His family still lives in the Czech Republic so, at least for his writing, he has the best of both worlds, as his professed goal is to share the stories of his birthplace with an international audience.

Spaceman of Bohemia is set in the proud new nation of the Czech Republic in the near future, in 2018. Jakub is a young professor of astrophysics specialising in ‘cosmic dust’. A mysterious dust cloud has settled between Venus and Earth, partly obliterating the night skies. Jakub agrees to investigate this dust, thereby becoming the first Czech astronaut of the new Republic’s first independent space mission: a hero, his face emblazoned on the nation’s TV screens and T-shirts. He will be away for possibly a year, possibly never to return, and must leave behind his beloved wife Lenka. The launch takes place from a potato field in a spaceship named ‘Jan Huss’ after the fifteenth century Czech protestant martyr and reformer. The ship carries plentiful supplies of Nutella, pitta bread and bottles of whisky.

Spaceman is a dark and delightful Czech satire, a reminder of the great Czech satirists Jaroslav Hašek, Bohumil Hrabal and Josef Škvorecký, but it is so much more besides: a grand history lesson, an exploration of inner and outer worlds, a love story, a look at modern celebrity and the corporate takeover of the former Eastern Europe – of Jaroslav Kalfar’s childhood home. Jakub was ten in 1989 when the Velvet Revolution fell over Czechoslovakia, The iron curtain tumbled with a dull thud and the bogeyman invaded my country with his consumer love and free markets. ‘Today’, in 2018, Jakub watches his country struggle as it attempts to come to terms with its past. He has, it transpires, undertaken the space mission in order to atone for his father’s past as a Secret Policeman, an informer and torturer under the old regime. After 1989 the son ended up as a child of the losing side. Parts of the novel are nostalgic flashbacks to Jakub’s pre-1989 childhood spent on his grandparents’ farm, ‘the good old days’ when the slaughter of fattened pigs was cause for village celebrations, but the village is also where Jakub discovers the truth about his father.

Jakub’s marriage deteriorates the longer he is in space and he (and we) doubts his sanity. Initially Jakob loves the solitude and silence of space and is happy to leave the cares and pressures of the world behind but space is a lonely place and Jakob is essentially a lonely man. He befriends – or is it the other way round? – an alien named Hanus ‘who’ happens to have gained access to the spaceship. Hanus is a grotesque giant spider with thirty-four eyes, eight triple- jointed legs, a red-lip-sticked human mouth and smoker’s teeth (I do hope this novel is made into a film!) and keen to investigate the skinny human with only two legs. Hanus becomes Jakub’s soul-searching confidant. Or is Hanus an hallucination on Jakub’s path to madness and cosmic dust?

This is a novel of psychological and philosophical depth, in spite of the laughs and observations of Czech life, with numerous clever asides and space oddities. You’ll even learn what happened to Leica the Soviet dog and hear about the Spaceman’s treats, spaghetti bolognese in a tube and whisky slices. Thoughtful reflections on Czech history enhance and expand the depth of the novel: on Wenceslas Square in Prague, the scene of so many historic struggles 1945, 1968 and 1989, when Spaceman Hero Jakub is presumed dead, he returns to earth to admire his own statue, and comments: Will we ever march again on these bricks in national unity, fighting yet another threat to Europe’s beating heart, or will this new Prague become an architecturally brilliant strip mall?

Jaroslav Kalfar grew up loving science fiction films which he used to watch with his father. This refreshingly genre-free novel is his original homage to sci-fi, a meditation on reality, what it means to be human, a fantasy, a space oddity. Space becomes the perfect place to reach the limits and extremes of our own minds and to explore the breadth and scope of ideas, language and love. Riddles and revolutions, brilliantly thought through.

Did Jakub reach the cosmic dust? Did his marriage survive the space mission and what happened to the lip-sticked alien? This is a strange and beautiful book. Do read it. And witness the remarkable launch of Jaroslav Kalfar on his own literary mission.

Written by Jaroslav Kalfar (in English)