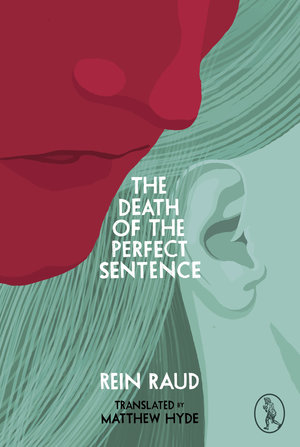 #RivetingReviews: West Camel reviews THE DEATH OF THE PERFECT SENTENCE by Rein Raud

Titles are important. For me, a good artwork title is more than a label, it is integral to the text – chosen and worked on by the author and sensitively treated by the translator.

‘The death of the perfect sentence’ and its natural variant – ‘the perfect death sentence’ – therefore intrigued me. And my curiosity only increased as I worked my way deeper into this intricately plotted spy novel set in an Estonia that is still part of a tottering Soviet Union, with the forces of independence, perestroika and old-guard conservatism vying for  supremacy. What perfect sentence was Rein Raud (and his translator Matthew Hyde) referring to? Did he mean the end of the project whose intended goal was a communist utopia? Or was it the opposite – the ideal of a free and independent Estonia, seemingly just out of reach to Indrek, Raim, Anton and their gang of idealistic activists?

Death seemed to suggest an ending – obviously; but also a crossing-over from one world to another. Throughout this short novel the characters are forever crossing borders: from Estonia to Finland and Sweden and back again; from Russia to Estonia, and also from Russian to Estonian – the ethnicities and their languages still sharply defined, despite half a century of Soviet rule.

There is also the journey over the border between the present moment – the independent, twenty-first-century, capitalist Estonia of the time Raud is telling his story – and the Estonian Soviet Republic of the past, when the events of his tale take place.

Then there are the borders between individuals – the distances that must be traversed if love is to flourish. And this, is turns out, is the locus of the book’s title; the moment that makes sense of what, until you reach it, feels a rather nebulous, overcomplicated and fragmentary plot.

Alex and Maarja – initially two secondary characters – are drawn individually, and not particularly willingly, into the chain of amateur and professional agents and double-agents who are smuggling files out of Estonia. Without knowing about their clandestine connection, they meet. And they fall in love.

A romance ensues and at the moment of consummation, Alex whispers into Maarja’s ear ‘the perfect sentence’ – what is ‘I love you’ in Estonia, I wonder? – and the whole convoluted web the book has been until this point rearranges itself into a neat, sharply focused line of cause and effect.

The epiphany is delicious, and is followed almost instantly by the horribly moving realisation of the inevitable outcome – the destination the novel’s disparate elements have been pointing to all along.

It takes a brave and experienced writer to trust his own skills and test those of his reader as much as Raud does in this sneaky genius of a novel. It is inspired to then give it a title that on opening the book is so enigmatic, and on closing it is so crystal clear.

The Death of the Perfect Sentence