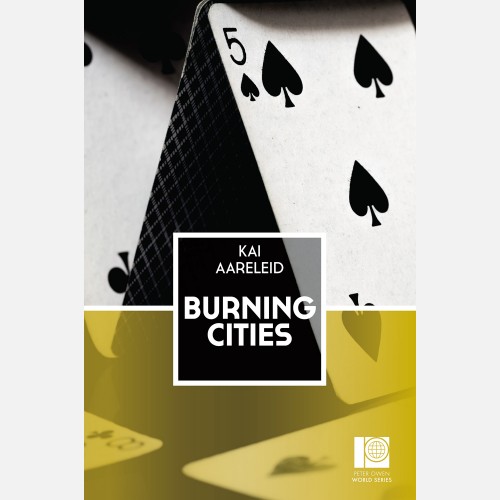 Kai Aareleid’s Burning Cities, one of three titles in the Baltic Season of the Peter Owen World Series, successfully weaves a powerful domestic tale within the larger tapestry of seven decades of Estonian history. Authors of intimate stories that reflect the course of a country’s historical fortunes face a challenge: to create fictional protagonists we’ll care about without their writerly imagination being clipped by the magnitude and details of nationally significant events. Aareleid deftly overcomes that challenge, giving us believable human beings through the eyes of Tiina Unger, who recounts the story of her family, from her parents’ first meeting in 1941 to the present day, with most of her tale unfolding during the years when their country was part of the Soviet Union (1944–1991).

The vicissitudes of Tiina’s family and neighbours follow those of Estonia, and through them all we catch glimpses of other lives stretching further back into the past. In a land ruled for centuries by a succession of foreigners – Germans, Swedes, Danes, Russians – and briefly independent from 1919 to 1944, Estonian identity has, remarkably, survived, but Aareleid does not shrink from depicting the intricacies of its context: the Ungers’ dispossessed neighbours, as well as their doctor, are Baltic Germans, who formed most of the country’s elite in pre-Russian days; and the influence of Russian culture long before WWII also surfaces.

The child Tiina intuits from silences and broken sentences the losses suffered by the adults around her and the anxieties behind their cryptic words. The dark corners of her father’s personality will turn out to be the result of grief and the cause of further tragedy. Old Mrs Wunderlich’s sighs as she tenderly dusts her books – ‘My thousand friends … Oh, how I’ve loved you all’ – betray her disconnection from a new era she hasn’t chosen to inhabit. The sadness that overwhelms Hedi, Tiina’s nanny, when they pass the ruins of the Vanemuine Theatre and a long-forgotten melody comes to mind, is palpable to the child, though she’s too young to understand that this had once been the country’s foremost national theatre and their city of Tartu the site of the annual festival of Estonian song. ‘Sometimes memories come back and knock the wind out of you. Ahh. Let’s go home,’ Hedi says.

But even as Tiina moves into the future, she faces losses of her own: the end of the love between her parents; the move to an unknown destination of her best friend and first love, the Russian boy Vova, whose father is stationed at the military air base outside Tartu; the traumatic death of her father.

Time has a slippery, even liquid, quality in Aareleid’s hands: chronological order gives way to the workings of memory, present-day events, reflections and associations. No less daring, or boldly executed, are the shifts in point of view of the early chapters. The book consists of more than eighty short scenes, each with a tightness reminiscent of poetic meter. Together they give the prose a compelling tempo, crucial to which is the precise, lyrical and unsentimental language of Adam Cullen’s excellent translation.

Valeria Vescina is an author, teacher and critic. Her debut novel, That Summer in Puglia, is launched this spring. Her activity as a critic includes literary and opera reviews for the European Literature Network, Seen and Heard International and Talking Humanities. She is currently researching her second novel.