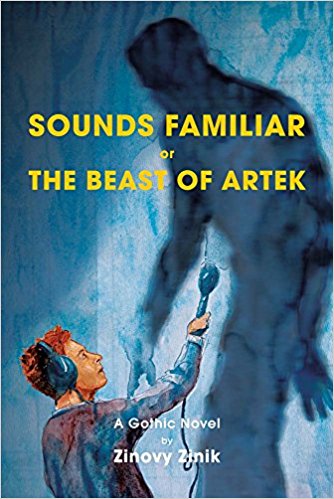 The latest book from the Russian-born bilingual Londoner, Zinovy Zinik, is consciously labelled “A Gothic Novel”; and it adopts and manipulates the tropes of that genre to impressive effect. The decaying house, on the point of Usher-like collapse, is contemporary London. The vulnerable heroine is in this case male – Sim, a damaged Russian immigrant. His strapping guardian is Greta and she is connected to Sim in ways neither is initially aware of. An uncomfortable eroticism pervades almost every scene, and a monster – the Beast of the title – looms in the backgrounds of all the characters and brings to the book the requisite occult element: a mysterious sect engaged in exploring sound as a means of control. The disparate characters and storylines are brought together by a Janus-faced puppeteer, the smoothly English Archibald Wren, who is either helping Sim, Greta and their associates to fight the Beast, or is inveigling them into assisting the Beast.

But the best gothic fiction is never satisfied with offering complex plots and imagining unimaginable horrors: it uses supernatural extremes to explore contemporary concerns, employing thrills and scares to describe the apparently more mundane threats present in the real world. Sounds Familiar is no exception. The Beast lurking in the backstories of the novel’s various players – and threatening to appear in their current lives – is not just a physical being. It is the legacy of Soviet Russia, which has been left not just to Russians, but also to those in the West who were in thrall to the totalitarian state, either worshipping or fearing it.

Archibald Wren, in a passage describing his own experiences in Russia, captures in a few sentences the place that Russia, in both its Soviet and post-Soviet incarnations, holds in the modern worldview: “They used to say that the Soviet Union was the Communist future of mankind” he says; “But I saw it … as everyone’s past … as a repository of Western fears and phobias … a trash can full of all the obsolete and dirty aspects of our civilization”.

This “trash can” image is pinpointed to a certain place (which, we discover in the author’s postscript, was real): the Black Sea summer camp Artek. This was a luxurious resort, purpose-built for the privileged children of the Soviet Union’s most honoured citizens and frequented by those “useful idiots” (a sobriquet apparently coined by Lenin) – the Western leftist admirers of Soviet Russia.

All the characters in Sounds Familiar are connected to Artek in some way, and the spectre that was based there is slowly unveiled as not some esoteric, supernatural power, but a very real, very sinister, human-level horror. Zinik thus reveals his use of the gothic genre to be part of a great tradition; and his masterful application of the elements of the form means this book should sit alongside its very best examples.

Sounds Familiar or The Beast of Artek