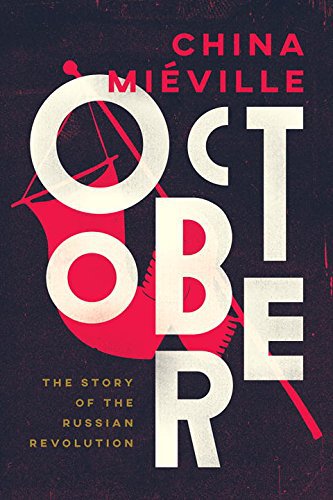 China Miéville’s fiction output outnumbers his nonfiction by about three to one. So, while his political and academic credentials suggest that writing a history of the Russian Revolution would be no kind of stretch, readers could be forgiven for thinking he might bring a fiction writer’s sensibility to this nonfiction story.

On my reading, he does. The scholarship Miéville employs is of a high standard – where possible, incidents are described using first-hand accounts; in his acknowledgements, the author pays tribute to the “leading researchers” who have read and responded to the manuscript; and his “Further Reading” is a comprehensive list of scholarly works, histories and memoirs he “found particularly helpful and/or interesting in the long research for this book”.

However, this is not an academic work. The “Further Reading” is not a bibliography; and there are no references or declared sources in the text. What’s more, Miéville makes great use of the novelist’s tools. October is elegantly structured. We start with a “Prehistory of 1917”. This is followed by a sequence of nine chapters, each dealing with one of the nine months leading from the February Revolution – which saw the fall of Tsar Nicholas II and the establishment of the shaky “dual power” of the Provisional Government and the Petrograd Soviet – and building steadily, day by sluggish day, to the October Revolution later that year, when the Bolsheviks “seized” power (parentheses intended).

The story is told in a series of tight, digestible sections. Neat explications of the confusion of switching loyalties and changeable exigencies are interspersed with impressionistic descriptions of, for example, a fleeing Lenin stoking the fire of a steam engine. Miéville even makes an interesting choice of tenses – using the present for his framing chapters, but the past for those key moments between February and October. Thus he intimates that he is describing the prevailing situations in the pre- and post-revolutionary eras, but specific incidents in what I’m sure he’d smile at me calling the “interregnum”.

With all these fictive elements at play, and with his avowed political stance as a modern-day Marxist, one could be forgiven for assuming that Miéville’s account of the Revolution is a romantic one: brave leftists sweeping away the terrible Imperial regime, utopia shining in their eyes. Yet October paints exactly the opposite picture. What we see is a bitterly divided left, unable to agree on a route to power – or, more importantly, if they even want power it. We see fickle, unreliable leaders, whose failure to grasp the reality of the volatile situation leads to decisions that still have repercussions today. Even Lenin is a mercurial, divisive character, out of touch with his party and the people it claims to represent.

Above all, we see those people acting not like a mob, but like ordinary individuals, attempting to engage with what is happening around them while trying to live their everyday lives – taking trams on the day the Winter Palace fell, or bringing wood into Petrograd on barges, while the February Revolution rages on the bridges above them. And it is in these human stories that Miéville, the novelist and historian, is most effective and effecting.

October: the Story of the Russian Revolution