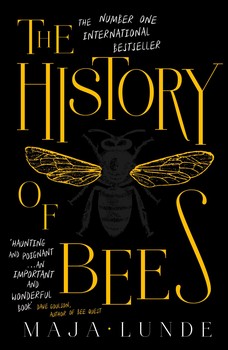 There is a key moment in the professional, personal and spiritual life of William Savage – one of The History of Bees’ three protagonists – when he realises that, by redesigning the standard beehive, bees can be “tamed by us, become our subjects”. By thinking of the new hive not as a house but as a laboratory and a factory – somewhere beekeepers can study and control the insects – William Savage, along with his colleagues specialising in the field of apiary, make the breakthrough that forms the centre of this expansive and powerful novel.

Savage’s story takes place in mid-nineteenth-century England. In early twenty-first-century America, his ancestor, George, is an industrial bee-keeper, witnessing first-hand the early worrying occurrences of CCD – Colony Collapse Disorder, the real-life phenomenon in which bees abandon hives overnight, bankrupting their owners and putting the human food chain at risk. The novel’s third protagonist, Tao, lives in late twenty-first century China, in what I’m sure every reader will hope is not their children’s future – a global dystopia that is the result of CCD, the disorder that can be traced back to the scientific breakthroughs made by Savage and his ilk 250 years before.

Maja Lunde’s debut adult novel, is therefore, a cautionary tale. Her point – that human interference in the natural order has far-reaching consequences we’d be wise to address now – is made adroitly and packs all the more punch because it is delivered via three very personal, very human stories. While William, George and Tao are all connected in some way by bees and beekeeping, their primary concerns are their relationships with their children. But it is no great effort to connect Lunde’s two main themes.

What makes this novel even more interesting, however, is the control Lunde maintains over her material. In many ways, she looks down on her characters and her plot in the same way that, as William says, “the sky … looked down upon me, and perhaps also God the Father … because this is how we shall look down on the bees”. Lunde, then, is a kind of literary apiarist, pulling out from the hive of her novel its various structures – its frames – and displaying to her reader the activities of its characters. This is not to say that there aren’t dramatic moments in the book – there are. But overall it is a quiet, and at times rather slow reading experience. Yet as the evidence from each, almost scientifically recorded, incident accumulates, the effect of the novel builds. As a reader you begin to trace the connections between the three plot strands and simultaneously develop a pit-of-the stomach sickness as you sense where we are heading.

Only a rare reader won’t close this book and go searching for more information about bee populations and solutions to CCD. This, no doubt, is Lunde’s intention: she exerts control even after her reader has finished this persuasive debut.

THE HISTORY OF BEES