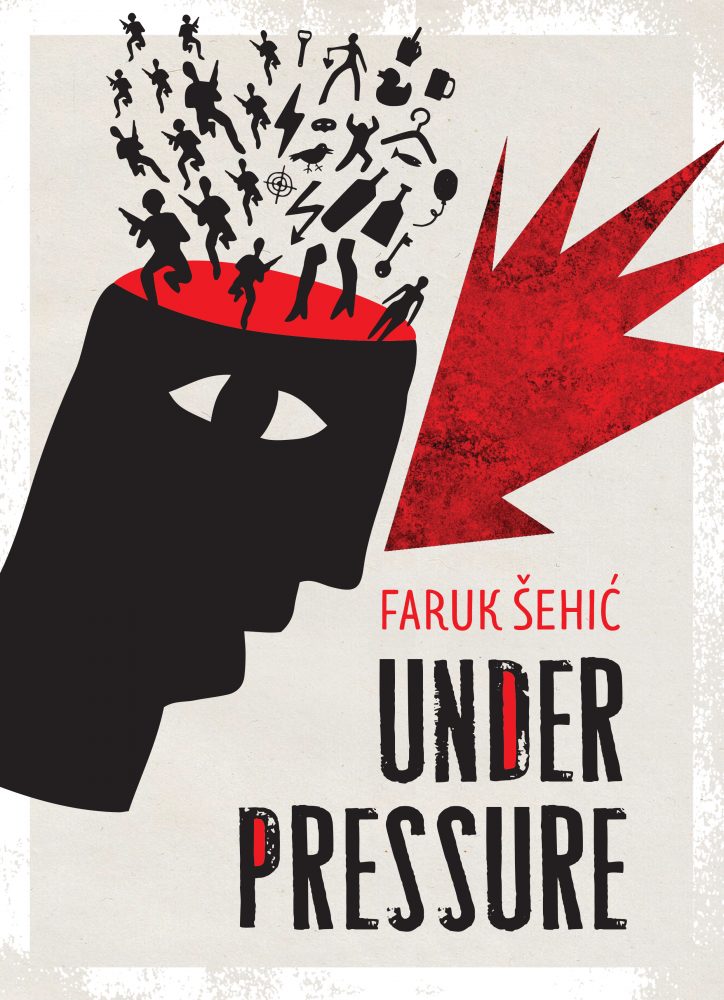 Faruk Šehić is a poet and a war veteran. If that sounds romantic it’s not meant to – it’s true. During the Balkans war of the early 1990s, the poet – aged twenty-two at the outbreak – became an active soldier and unit commander in the army of Bosnia and Herzegovina. He fought for nearly four years, returning home broken, with PTSD and an unenviable understanding of the ‘mud and deluge’ of war, as well as its horrific physical and psychological extremes. Šehić wrote these fragmentary soldiers’ tales soon after returning home. They caused a sensation in his native Bosnia for their honesty and eloquence, and they have now been published in English for the first time. Under Pressure exists thanks to a Kickstarter campaign on the part of the Balkans specialist publisher Istros Books, which also published Šehić’s first novel, Quiet Flows the Una, in 2016.

Šehić himself avoids metaphor and hyperbole in his writing, but that doesn’t stop me praising him as ‘the Bosnian Hemingway’. We need to hear more about Europe’s most recent war from the (former) Yugoslavs themselves: they were the ones who fought and were raped, wounded and traumatized. Over 100,000 people lost their lives from 1992–1995. Under Pressure spares us none of the violence and inhumanity of war, but Šehić’s writing is simply beautiful. For all the fucking, swearing, drinking, shitting, shooting and swearing (no exaggeration), the raw war experience is described with lyrical elegance. As the narrator collects up the dead bodies in the middle of the night he says: ‘The invisible heartbeat of night is beating in my neck veins.’ And later: ‘[In war] night falls like a trump card’. ‘War becomes part of your body like an infected appendix’.

It’s a long time since I’ve been as excited by such original writing. Šehić’s sentences are often delivered like bullets, often without verbs, as if the excess of war merits no adornment, and as if he feels under pressure always to be authentic and true to the experience. He is often funny. He is never sentimental:

‘The retreat started a little before dusk. Nagging November rain has been falling all day. Cabbage rain, they call it here … The humidity it brings gets into your bones, your heart, your brain … Kills shrapnel-riven trees. Washes the colour out of the asphalt. Sends hordes of greasy clouds to capture the sun.’

The soldier-narrators’ senses are on high alert as they are moved to tears by bees and trees, by overhearing David Bowie’s ‘Rock and Roll Suicide’ and chancing upon books to read in deserted houses. Several soldiers tell their tales in this novel over several years and locations but to the reader they appear as one, unified by the first-person voice and the inspired translator. This can’t have been an easy book to translate, but Mirza Purić has worked wonders with his impressively broad vocabulary, which includes slang, swearing, sex, scatology, medical conditions and the natural world. One decision I don’t agree with, however, is making the soldiers’ plentiful dialogue read like West Country colloquial – it’s annoying: ‘Bad job ’e got killed, ’e was talented, ’e could’ve gone on to become a good writer.’

Like all good dramatists, Faruk Šehić also knows when to change pace. Scenes set in a psychiatrist’s clinic – where the soldiers endure interrogation over their mental state simply in order to get more prescription drugs and leave to whore and drink – alternate with rapid-fire journal entries, witty lists and philosophical reflection, such as in the chapter ‘Kaleidoscope of Memory’:

‘How many words does it take to describe your own life? Twenty thousand? Or fifty thousand, enough for a decent novel? I’m not interested in my childhood. There may be a flashback or two, though. That period of life looks quaint in old black-and-white photographs, but mine have gone up in flames. I no longer possess a childhood. It possesses me. I am a grown man … Why should anyone give half a fuck about the fact that I’ve been born? Happens to everyone. We don’t come from the conveyor belt, but from the darkness of the uterus, we emerge headfirst and dive right into the bag of dicks that is reality, like a shell fired from a 120 mm mortar. They don’t call these shells “babies” for nothing.’

However, it is with his visual-lyrical descriptions of nature that Šehić touches your heart. He becomes a filmmaker and poet combined, as simple beauties catch his protagonist’s eye mid-conflict. A sequence of photographic images frame the final scenes of the novel, which ends as it begins, in the midst of war, as if to emphasise that there is no real beginning or end to armed conflict. Faruk Šehić has no message to deliver, no moral judgement to make. He is just there, experiencing it – and we are with him:

‘I lift my gaze towards the sky … Hand grenades are clanking in my assault rucksack. The potential corpse is off to the frontline … I sit on the fragrant green meadow. Up in the air, the wind blows dandelion fuzz every which way. I put my head on my rucksack. A bumblebee buzzes in the crown of a black locust tree. I close my eyes and listen to the breath of the earth in the pulsating chlorophyll of the plants. A goldfinch sings me a lullaby.’

Translated from the Bosnian by Mirza Purić