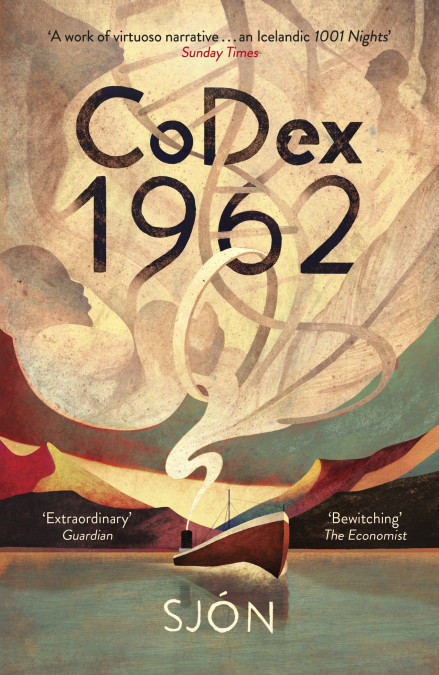 Codex 1962, beautifully translated here by Victoria Cribb, at first might seem a rambling, confusing, picaresque tale – hugely enjoyable, but not particularly coherent. I contend that it is the opposite: Sjón has complete control of his huge wealth of material, which over the course of this trilogy he corrals and organises into a dense and powerful statement.

In the epilogue the author states that ‘The earth’s biomass is stable … But the biomass of fiction is growing’. Codex 1962 is Sjón’s attempt to capture this sense of never-ending expansion while funnelling it into something a reader – a human – can digest. As he also says in the epilogue, ‘With every retelling and garbling, misunderstanding and conflation, mankind’s world of songs and stories expands.’ Each time a storyteller tells their tale – from the first oral narrators, to those who recorded stories ‘on a clay tablet, papyrus or paper, wound in a scroll or bound in a book’ – they are attempting to channel all the stories that have gone before into a new one. But in doing so, they also add to the global biomass of fiction.

Sjón’s own attempt at funnelling the world’s stories into one, while adding to the world’s story total, is formed around the life story of Jósef Loewe. Suffering from a disease known as Stone Man Syndrome – in which the body’s tissues gradually turn to bone – he relates his life to a medical researcher, Aleta. But he does not tell the true facts of his life – instead he fictionalises them.

‘Just as the bones of a patient afflicted with Stone Man Syndrome react to blows by swiftly forming a new layer of bone tissue over the site, so Jósef’s mind wove a story every time he encountered a painful thought or memory … to lend meaning to the suffering and helplessness caused by his condition, he had, though born in Iceland in August 1962, found a way to situate his birth in the midst of the Holocaust.’

With this image, Sjón refines his idea that each story is a retelling of all previous stories, but also adds to the total of stories. Jósef’s tales are a way to recraft his pain. He does so by conflating it with the story of a Holocaust survivor. And this conflation is itself a new story; articulation of pain has added to the grand total.

Codex 1962 is not all about pain, though. The tale of the fictional Jósef’s life is full of magical, mythical and astonishing events, and a cast of marvellous (in all meanings of the word) characters. Fictional Jósef is not born, but formed from a lump of clay – hinting at the creation story, but also at the ‘real’ Jósef’s disease. We follow a faintly comic Angel Gabriel as he ‘bestrode the Continent, his celestial soles planted on the Greenland ice-cap in the north and the Persian plateau in the south … Now that’s what I call a proper angel’. We cross the Atlantic with an American professional fighter, and we dive into a crime caper around international stamp collecting. These all contribute to what Sjón describes as ‘the vitality contained in [stories’] loose ends and red herrings (yes, these are as fundamental to great works of literature as they are to thrillers)’.

Into these technicolour riches, Sjón inserts what, because it comes only in the third part of the trilogy, I’d call a tolling bell. As we approach the end of this tome, as we discover the truth of Jósef’s true life – and inevitability of his painful death – we a reminded of our own mortality. Between the third part’s chapters, there are sections entitled ‘The Dance’, listing the lifespans of people born in Iceland in 1962, with details of the causes of their deaths. These dead are seen on a stage, their number increasing with each passing year. In the last of these sections, one Jósef Loewe is seen ‘calling back into the passageways that brought him to this place … —Dear Sjón, I await you here.’

West Camel is a writer, reviewer and editor. He edited Dalkey Archive’s Best European Fiction 2015, and is currently working for new press Orenda Books. His debut novel, Attend, is out now. www.westcamel.net.