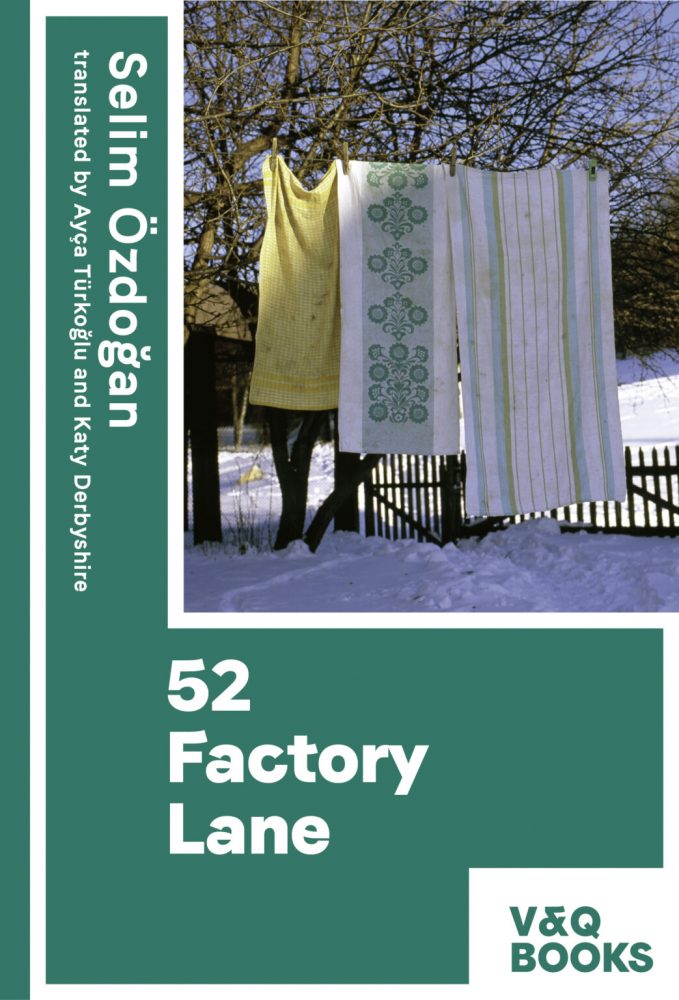 52 Factory Lane starts as it ends: with arrival. It opens with Gül, the main character, arriving by train in Bremen, and it ends many years later with her getting off a plane in Hamburg. In between unfolds a story of longing: for family, for summers back home, for familiar flavours and for letters from family to arrive; but also of how home itself can be more than one place.

It is the second book in a trilogy by Selim Özdoğan. The first volume, The Blacksmith’s Daughter, appeared in German in 2005 and in English by V&Q Books last year, and tells the story of Gül’s childhood and early married years in rural Anatolia, starting in the 1950s. Both books are beautifully yet simply written and manage to be moving without slipping into sentimentality. However, while the first book is well worth reading, you will have no problems following 52 Factory Lane even if you haven’t – the author includes enough explanation and reference to earlier events for it to make sense.

When she first arrives in Germany, Gül – whose name means ‘rose’ – can’t get over how quiet it is. Or how tiny their flat is, or her husband Fuat’s drinking habits. And she misses her two daughters, Ceyda and Ceren, and her father, all left behind in Turkey. German feels strange to her – although as a friend writes to her, ‘they talk so little it’s hardly worth learning the language’. And as for the food, well … she speculates that garlic must be sold by the clove rather than the bulb here.

She comes to Germany with the intention of working, but has no work permit to start with. This lands her in some unpleasant situations, such as having to hide in a large box of dead chickens during a raid, and being ripped off for piecework. But work does become her way into German society, even if many of the people she meets are, like her, from elsewhere. In just a couple of sentences, Özdoğan evokes a level of detail that summarises pages of socioeconomic history:

‘Gül’s new neighbours are Spanish, Greek and Turkish, and there’s a handful of Germans too. Factory Lane, where they now live, isn’t tarmacked and has no pavement or paving stones.’

This is also the story of how Germany and Turkey changed from the 1970s onwards. In terms of technology, cars get better, and communication starts with letters and moves, with increasing ease, to the telephone. Television, initially an introduction to German culture, later, with the arrival of satellite dishes, becomes a way of keeping in contact with Turkish media. The supermarket offerings get better in both countries.

One of the reasons the novel is so readable is Gül herself. She’s warm and tenacious, and you want things to go well for her and those around her. Another highlight is her husband, Fuat. Not that he’s ideal – he drinks too much, for one thing – but he does have a way with words, which brightens up the pages, not least his catchphrase, ‘It beggars belief’.

Missing her father and siblings, Gül eventually moves back to Turkey with her younger daughter and lives in her home village for several years before getting tired of the idleness and deciding to move back to join Fuat in Hamburg. The novel captures the feeling of being split between places, of having parallel potential lives. Wherever you live, you’re separated from someone.

It all ends on a cliff-hanger, leaving you wondering what Gül will do now she’s in Hamburg. Happily, there won’t be long to wait – publication of the final part of the trilogy is currently planned for spring 2023.

Darcy Hurford is a translator from Estonian, Finnish, German and Swedish. Originally from England, she is now based in Belgium.