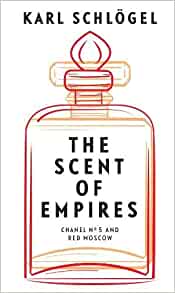 #RivetingReviews: D.E. Hurford reviews THE SCENT OF EMPIRES: CHANEL NO 5 AND RED MOSCOW by Karl Schlögel

What links Coco Chanel, Catherine the Great and Soviet socialising? If The Scent of Empires is to be believed, they are all linked to Red Moscow, a ‘somewhat sweet, heavy aroma’ popular in the Soviet Union and descended from another perfume named after Catherine and – this is Karl Schlögel’s hypothesis – related to Chanel No 5.

In The Scent of Empires, Schlögel, a historian known for works on East Europe and Stalinism in particular, explores links between politics and fashion. He describes how one fragrance ‘filled the air on every festive occasion in the Soviet Union – at the Moscow Conservatory, in the Bolshoi Theatre, at graduation ceremonies and weddings’.

To explain his hypothesis, he takes us back to pre-revolutionary Russia, where many French experts worked in a thriving cosmetics industry. One was Ernest Beaux, at a company called Rallet. Another was August Michel, who also worked at Rallet before moving to another company called Brocard. In 1913, Beaux invented Bouquet de Catherine to commemorate three hundred years of the Romanov dynasty. Following the revolution he fled to France, where, in 1920, he created Chanel No 5, using Bouquet de Catherine as a starting point. Meanwhile, Michel remained in Moscow. Using a perfume known as Le Bouquet Favori de l’Impéritrice as a basis, he developed Red Moscow, which was launched in 1927.

Two perfumes – one ubiquitous, one influential – with a shared origin. It’s an appealing idea, and while Schlögel is clear that the relationship cannot be proved conclusively, he provides many arguments as to why it is likely, based on similarities in descriptions of all the scents, and the likelihood of both men having access to the same information.

Beaux had a second career as a successful perfumer in France. Michel’s fate is unknown after 1937 – likely one of the many victims of the purges. Very similar talents could meet very different fates in the twentieth century, simply depending on where they were. This becomes clear when Scent of Empires goes on to compare the lives of Coco Chanel and Polina Zhemchuzhina. Zhemchuzhina was the wife of Vyacheslav Molotov, and was for a time in the 1930s responsible for the Soviet Union’s perfume and cosmetics industry, before falling out of favour with Stalin and spending five years in exile. Chanel, meanwhile, became involved with the Germans during the occupation of Paris. But while Chanel could lie low in Switzerland for a few years after the war until that was forgotten, and then pick up where she left off, Zhemchuzhina’s career was essentially over once she lost favour with Stalin.

Schlögel also writes about scentscapes more generally. He observes that all of the horrors of the twentieth century had an olfactory side. We think of them in visual terms, based on photographs, but execution sites, camps, battlefields and crematoria would have been full of horrendous odours and there are numerous testimonies to this effect. It’s a grim but valid point. One especially memorable example is given by Varlam Shalamov, author of Kolyma Tales (available as a Penguin Classic), who wrote vividly about the olfactory effect of the seventeen years he spent in various camps and how it deformed his perception of taste to the point where potatoes seemed like poison even fifteen years after his release.

There are other enjoyable excursuses here: Mikhail Bulgakov’s satire on the French fashion industry in The Master and Margarita; parallels between the new ways of dressing in the West and in the Soviet Union; a chapter on a perfume bottle designed by the painter Malevitch (of Black Square fame). All of which make The Scent of Empires an entertaining read on the links between culture and politics.

THE SCENT OF EMPIRES: CHANEL NO 5 AND RED MOSCOW