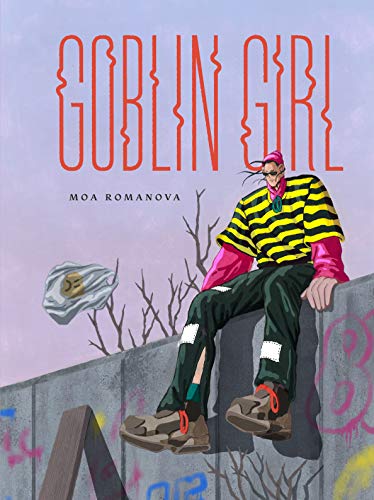 As colours go, pink is usually considered quite sweet and innocent. Ballet shoes, candy floss, maybe even ‘millennial pink’, the unofficial name that emerged from the pale-pink shade Pantone chose as colour of the year in 2016.

Not in Goblin Girl though. In this graphic novel from Sweden, a loosely autobiographical tale of panic attacks, depression and Tinder dates, pink is one of the dominant shades, together with black, white and the occasional burst of mint green. And the juxtaposition of pretty colours with the main character’s intense emotional states, flashbacks and often frustrated efforts to move forward in life is one of the things that makes the story so readable.

Moa Romanova comes from Kramfors in the north of Sweden, studied art in Gothenburg and Malmö, and now lives in Stockholm. Goblin Girl is her first book. It describes a point in the main character’s life when she is experiencing frequent panic attacks following a brief spell of psychosis, brought on by smoking spice. She is a resident of a former factory area of Gothenburg and is trying to get herself back into a happier, productive state. This involves visiting a comically ghastly counsellor – all platitudes, square-lensed glasses and a poster reading ‘KEEP CALM AND PRIVATIZE HEALTHCARE’.

The second element of the story entails an attempt at dating. The protagonist goes on a first date with a famous (unnamed) TV personality in his fifties, who offers to act as a kind of mentor in her artistic development. Although she’s uncomfortable with the age difference between them, initially he seems fine – he encourages her artwork and at one point talks her down from a panic attack. In the end though, he winds up ghosting her after she mentions that she’s got a tattoo. Online she comes across a news article listing his twenty requirements for the prospective love of his life, one of which – no tattoos – she’s failed. This leaves her wondering how to move on. Happily, she does, and the novel ends on an optimistic note.

Goblin Girl is full of distorted body shapes: the characters have massive torsos, exaggeratedly square shoulders reminiscent of Popeye, and tiny heads. It’s as if the shifting emotional states the story evokes are reflected in the shifting physical appearances and quirks of its characters. Eyes can be enormous; someone talks in hieroglyphics. While the book is visually very impressive, at times channelling a slightly 1990s retro feel with its digital clocks, smiling coffee mugs, and graffiti that looks as though it’s been drawn using PaintSpa, it’s not just pretty pastels. There is a changing palette of colours, including much stronger blues, greens and fuchsia pinks to represent nightmares. Overall it’s the images that drive the story more than the text, although the direct but expressive language plays an important part.

The story has its humorous moments too. There’s a warehouse party scene with a poorly disguised undercover policeman failing to score drugs from any partygoers. There’s also an interlude where the main character showers at a friend’s flat and borrows some LUSH shampoo. As anyone who’s ever tried their products will know, they come with a ‘use by’ sticker bearing the name and image of the person who made the product; in a flight of fancy, Romanova imagines the sticker man coming to life and a doomed romantic relationship taking place between him and the protagonist.

Last but not least, the TV guy is always depicted with a paper bag over his head. True, it protects his anonymity, but it also ensures he looks ridiculous.

Translated from Swedish by Melissa Bowers