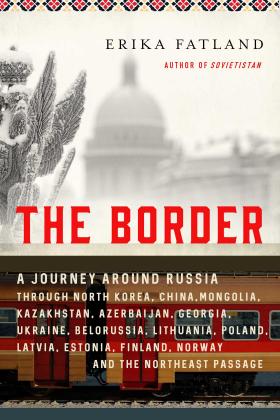 #RivetingReviews: Rasoul Sorkhabi reviews THE BORDER: A JOURNEY AROUND RUSSIA by Erika Fatland

When the Soviet Union collapsed in December 1991, Erika Fatland was only eight years old, living with her family in the small town of Ølen in Norway. She did not know what was happening around the world, but as a child she loved books and wanted to become a writer. Fast-forward to 2011. By then, Erika Fatland had graduated from the University of Oslo, had obtained her master’s in social anthropology from the University of Copenhagen, and had started a writing career. Meanwhile in Russia, Vladimir Putin was in power, having succeeded Boris Yeltsin in 2000 at age forty-eight, with the ambition to hold his rule over Russia and to return his country to its Soviet-era dominance.

With her passion for writing, her education in social science, and speaking the major European languages (including Russian, because she ‘wanted to read Dostoyevsky in the original language’), Fatland embarked on a massive project of travelling Russian’s borderlands.

When the Soviet Union collapsed, fifteen independent republics emerged overnight: six in Eastern Europe, three in the Caucasus region and five in Central Asia, plus, of course, Russia itself. For her travel writing, Fatland focused on Central Asia first. She started at the Istanbul airport, where East meets West and Turkish Airlines has the world record of flying to the most countries. From Istanbul, Fatland took a plane to Ashqabad, the capital of Turkmenistan, and thus began her journey through Turkmenistan, Kazakhstan, Tajikistan, Kyrgyzstan and Uzbekistan, the five Central Asian republics. Fatland calls them Sovietistan, the title of her book first published in Norwegian in 2014 – the year Putin annexed Crimea from Ukraine. The English translation of Sovietistan was published in 2020.

In 2018 Fatland published (in Norwegian) her second travel book, The Border: A Journey Around Russia. The 2021 English translation of The Border became a best seller on Amazon when Russia attacked Ukraine in early 2022. The book is divided into four parts: (i) The Ocean (the Arctic); (ii) Asia (North Korea, China, Mongolia, and Kazakhstan); (iii) The Caucasus (Azerbaijan and Georgia, but not Armenia, which although not Russia’s direct neighbour today, emerged from the dissolution of the Soviet Union); and (iv) Europe (Ukraine, Belarus, Lithuania, Poland, Latvia, Estonia, Finland and Norway). Fatland courageously travelled these countries mostly on boats, trains, buses, cars and even horses; she did not, however, enter Russia.

The Border opens with an expressive statement that President Putin made in his speech to the Russian Duma in 2005, describing the collapse of the Soviet Union as ‘the greatest geopolitical catastrophe of the twentieth century’. Putin was obviously referring to the loss of territories Russia had captured in the past two centuries, and also to about twenty-five million ethnic Russians who still lived in Russia’s borderlands after the dissolution of the Soviet Union – people who were once Soviet masters but now found themselves as minorities in various independent countries. Fatland’s travelogue depicts the tensions between these Russian ethnic groups and native populations across Eastern Europe, the Caucasus and Central Asia.

With the exception of Belarus, Russia’s East European neighbours are orienting themselves toward Western Europe (and NATO, which is making Russia nervous), while the Asian republics, from Azerbaijan as far as east as Kyrgyzstan, prefer to maintain good relations with Russia and have become like another ‘Middle East’ in some aspects of their political life.

In both Sovietistan and The Border Fatland blends travel observations and encounters with slices of history and chunks of geography. Her chats with ordinary people – drivers, restaurant owners, students, tourist guides, fellow travellers – are among the best parts of her narrative. The result is that the reader, after investing time in reading hundreds of pages, gains an encyclopaedic and yet vivid understanding of Russia’s borderlands. And this is not trivial, for Russia’s borders, at 60,932 kilometres, are the longest in the world.

Russia and its neighbours and borderlands continue to have huge impacts on international politics and the global economy, so first-hand travel reports such as Fatland’s remain an informative way to understand the region’s socio-political dynamism. Sovietistan and The Border have rightly established Erika Fatland as a strong non-Anglo-American female voice in the genre of travel writing.

THE BORDER: A JOURNEY AROUND RUSSIA

Rasoul Sorkhabi is a geologist, world traveller and writer living in the USA. His book reviews have appeared in Rain Taxi Review of Books and other magazines.