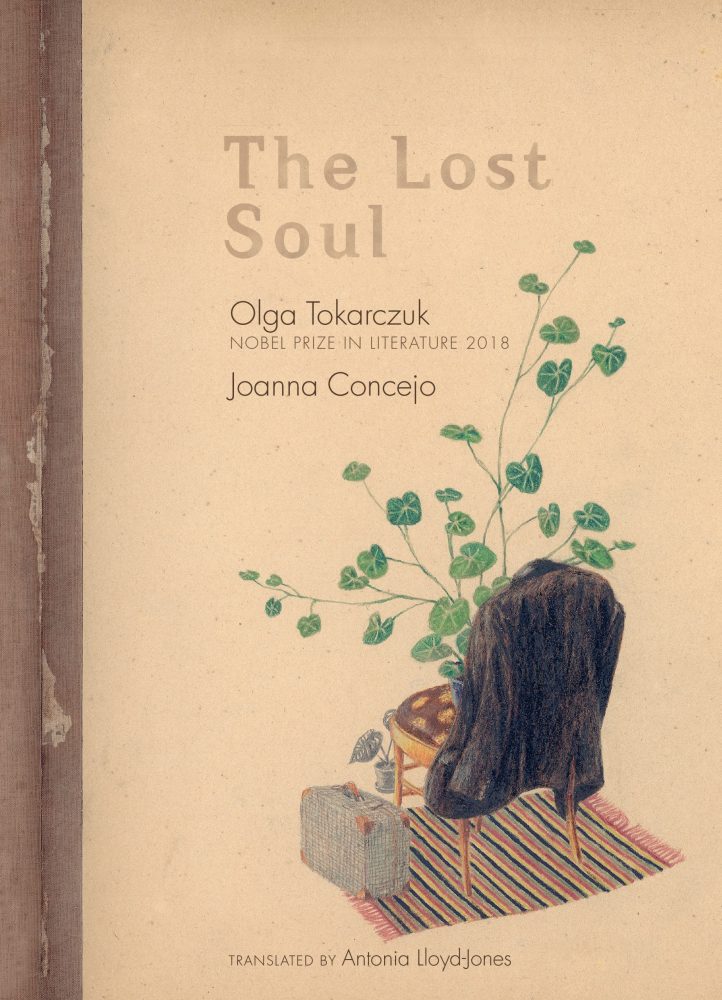 ‘If someone could look down on us from above, they’d see that the world is full of people running about in a hurry, sweating and very tired, and their lost souls … ’

So begins the text of The Lost Soul, an illustrated fable for all ages.

Originally published in 2017, it brings together two Polish talents. Joanna Concejo is an illustrator now based in France, who has also written books of her own. Olga Tokarczuk needs little introduction: Nobel Prize winning author of, among others, Flights, Drive Your Plow Over the Bones of the Dead and, most recently in English, The Books of Jacob. Given that the latter comes in at about a thousand pages, it’s easy to imagine that Tokarczuk needed the contrast of a short book.

The illustrations – pencil on paper – are beautiful and add layers to the story. First there is a bird’s-eye view of a snowy scene in a park, with children playing and a few lone figures moving across the space. As the perspective moves closer to ground level, we are able to make out individuals more clearly. Two children – a boy and a girl – are sharing a pair of mittens, the kind that are joined together on a string; then the boy appears to walk away, leaving the girl on the bench. Next there is a man sitting in what looks like a Polish milk bar, one of those formerly state-subsidised cafeterias that still exist in Poland’s cities today.

After this begins the text, translated by Antonia Lloyd-Jones, translator of other Tokarczuk novels and much else from Polish: John is a man who works very hard but has lost his soul. He feels strange. A wise old doctor suggests that he find a place of his own, and wait there quietly until his soul catches up with him. He follows her advice. Next we see his place in the country, where he acquires plants – plus a deer, a rabbit and a cat – and the plants and his hair grow.

Meanwhile, a small child – who looks similar to the girl with the mitten from the start of the book – appears first in a milk bar, then on a train and elsewhere, and eventually arrives at John’s house. With her she brings colour. Until now the illustrations have been entirely in black and white, but now splashes of colour appear – a yellow stream of sunshine, a crisp green nasturtium – before turning into full colour, as soul and owner live happily together. The plants just grow and grow, in an abundance of green that brings to mind ‘Le Douanier’ Rousseau.

There are little touches of humour here and there, like the watches and suitcases planted in the garden that grow into flowers and pumpkins. There are also instances of text and visuals working in tandem. For example, before John goes to the doctor, we read:

‘[s]ometimes he felt as if the world around him were flat, as if he were moving across a smooth page in a math exercise book, entirely covered in evenly spaced squares’.

And these words are actually printed on evenly spaced, exercise book style squares on the page before us. In an interview with the website culture.pl (titled ‘When Text & Image Combine’, and worth reading for the many examples of Concejo’s work it includes), Concejo mentions her love of paper as a material, adding that The Lost Soul was actually drawn on an old accounting book her daughter had found.

‘The Lost Soul’ is not just for children; it asks genuine questions: about the right way to live, and what our souls might be like.

by Olga Tokarczuk, with illustrations by Joanna Concejo