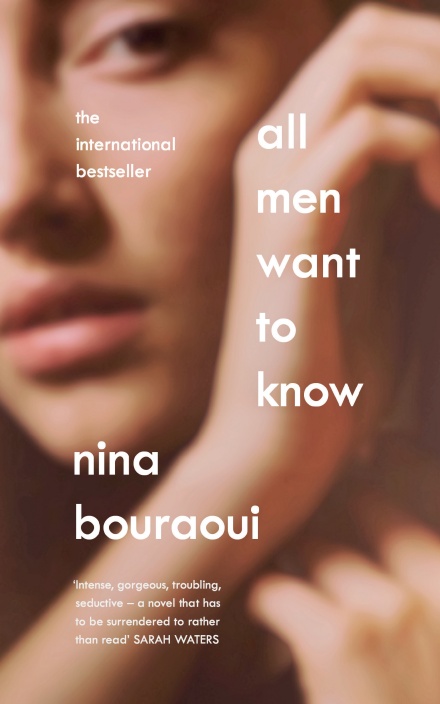 In All Men Want to Know, Nina Bouraoui recounts her own experiences of growing up in Algeria and France. With an Algerian father and French mother, Nina is torn between the two countries and cannot help but feel that wherever she goes, she will always be an outsider. As a young woman living in Paris, Nina faces a new struggle – that of coming to terms with her sexuality, and learning at last to love herself for who she is.

Written as a series of vignettes, with the alternating subheadings ‘Remembering’, ‘Knowing and ‘Becoming’, Nina’s story will touch any reader who has ever felt lost or out of place, or who has ever yearned to love and be loved. The memory of an attack on her mother, which forced the family to return to France, recurs throughout Nina’s story – a traumatic event that has clearly had a lasting impact on the whole family. Reflecting on her relationship to Algeria, Nina looks back at her carefree days in Algiers, running around barefoot with her best friend Ali, who loved playing with Nina the tomboy even though she was a girl – until he found a boy to hang out with instead. She reminisces about the time she spent in France with her grandparents, who despaired of their granddaughter’s wild, un-French ways. Each of Nina’s recollections is a story, a piece of the puzzle that has made her who she is today.

‘My Algeria is a place of poetry, beyond reality. I’ve never been able to write about the massacres. I’m not entitled to, I can’t, I’m the Frenchwoman’s daughter. Ana khayif – I’m scared.’

In Paris, Nina writes. At night she goes to the Kat, the gay club where she begins her journey of self-discovery. Nina’s honesty, her pain and her suffering are evident throughout – as is her sense of shame. Aneesa Abbas Higgins’ skilful translation captures these raw emotions, ensuring that despite its short length, Nina’s story will stay with readers for a long time to come.

All Men Want to Know is a vital book for our times – a time in which we all need to be more tolerant, more loving, and more accepting of our differences. By being there for one another – and allowing ourselves to remember, to know and to become – perhaps we can all help to make this world a better, kinder place.

ALL MEN WANT TO KNOW

Alyson Coombes is a freelance translator and editor. Her co-translation Eichmann’s Executioner by Astrid Dehe and Achim Engstler was published in 2017 by The New Press. She works with New Books in German and the European Literature Network to help find and promote the best contemporary European literature in the UK, and is currently working with the Queen’s College Translation Exchange to set up a new translation prize for schools.