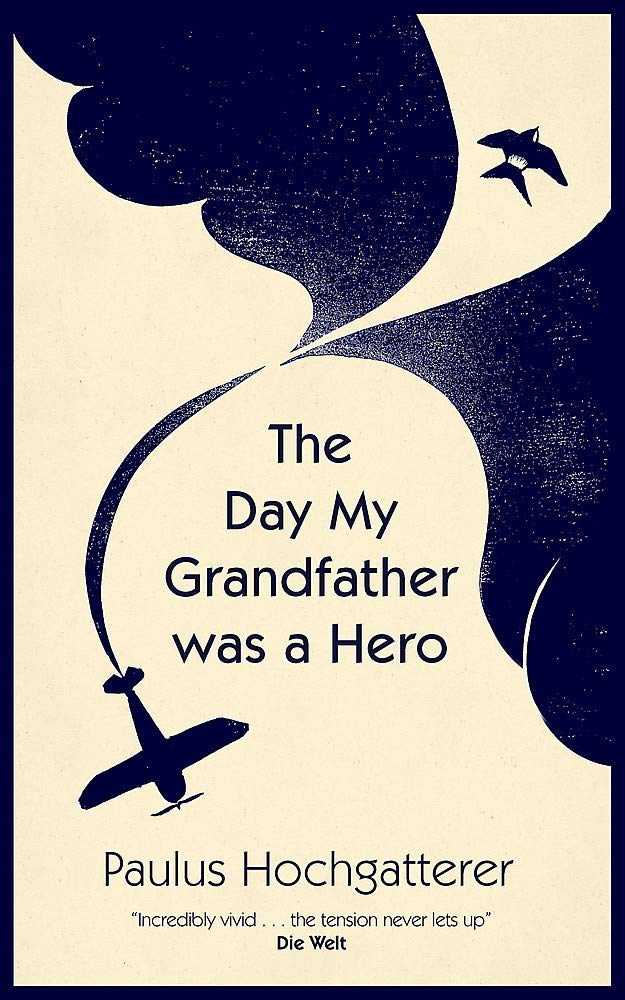 #RivetingReviews: Alyson Coombes reviews THE DAY MY GRANDFATHER WAS A HERO by Paulus Hochgatterer

The Day My Grandfather Was a Hero is an evocative novella set in Austria in spring 1945, during the final months of the Second World War. Thirteen-year-old Nelli has lost everything – including her memory – in a bombing raid, and has been taken in by a kind farmer and his family. The story unfolds through Nelli’s eyes, and the reader watches as she tries to make sense of the war and the world around her. Nelli is an observer – she notices every detail of her surroundings, from the coping mechanisms of those close to her, to the birds and plants, and the changing landscape, transporting the reader to this rural part of Austria.

‘They say my name is Nelli. Sometimes I believe them, sometimes I don’t. Sometimes I think my name is Elisabeth or Katharina. Or Isolde, like the young sales assistant in the hat shop. She’s the reason I go into town from time to time. When I stand outside the shop and peer through the window, I see Isolde’s torso floating around inside, back and forth along the shelves. The head with its auburn plait floats on top. I can’t see anything from the waist down. I imagine her lower half having sat itself down somewhere. Perhaps all the toing and froing has become too exhausting. Perhaps it doesn’t like the plait or the way in which the upper half says, How may I help you? But I don’t tell anyone these sorts of things.’

A few months after Nelli’s arrival at the farm, the family is joined by an escaped Russian prisoner-of-war. Although Mikhail is technically the enemy, the family can’t help but feel sorry for the emaciated man and together they create a new story; Mikhail is now a Danube Swabian, just like Nelli. But when some German soldiers turn up at the farm and start demanding answers, the family must decide how far they will go to protect their new ward.

Beautifully translated by Jamie Bulloch, The Day My Grandfather Was a Hero will transport readers back to war-time rural Austria, drawing them in with its imaginative language and distinctive voice. Reminiscent of Austrian writer Robert Seethaler’s novella A Whole Life, which also uses the landscape to bring the story to life, this captivating tale can be read in a single sitting. A story of courage and compassion, which was shortlisted for the Austrian Book Prize in 2017, The Day My Grandfather Was a Hero shows why Paulus Hochgatterer is considered one of Austria’s most important contemporary writers.

THE DAY MY GRANDFATHER WAS A HERO

Translated from the German by Jamie Bulloch

Alyson Coombes is a freelance translator, editor and book blogger (fromcovertocover.co.uk). Her co-translation Eichmann’s Executioner by Astrid Dehe and Achim Engstler was published in 2017 by The New Press. She works with New Books in German and the European Literature Network to help find and promote the best contemporary European literature in the UK, and is currently working with the Queen’s College Translation Exchange to set up a new translation prize for schools.