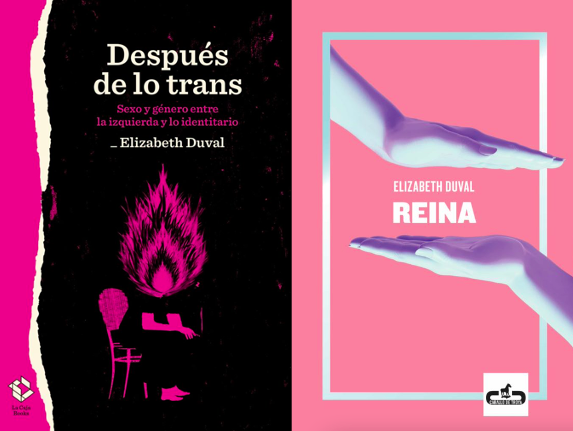 Elizabeth Duval is a Spanish writer and philosopher. I came across her work fairly recently and was immediately interested by her writing, as like myself, she has close connections with both Spanish and French culture. Born in Spain, Duval lives in Paris where she studied Philosophy. At the age of only 21, she has already written four books: Madrid será la tumba (Lengua de Trapo, 2021), Después de lo trans (La Caja Books, 2021), Reina (Caballo de Troya, 2020) and Excepción (Letraversal, 2020).

Duval explores important themes in her writing, including gender, sexuality and sex. These themes are most explicitly explored in her non-fiction title, Después de lo trans. As a trans woman herself, this is an essay that partly explores the frustration that Duval feels in always being considered an activist before being a writer or philosopher. However, beyond these more personal explorations, Después de lo trans is a visceral and ambitious essay that confronts the cultural and identity wars we are experiencing this century. Throughout the essay, Duval looks at the trans experience from the perspective of science, sociology, aesthetics and philosophy. With her relentless criticism and razor-sharp prose, she explores these issues and their usefulness in discussing the many aspects and reality of trans identity. The part that struck me most (perhaps as it is a very topical and widely discussed within literary circles) was where Duval broke down the contemporary feminist movement and analysed the conflicting relationship between trans-activism and trans-exclusive feminism. Her arguments throughout are clear, strong, and allow readers who may not be so familiar with such themes to develop an understanding of, and a dialogue with, the issues.

Duval’s earlier book, Reina, can be considered more as a work of auto-fiction. In fact, Reina was born from a diary that she kept whilst she was a 19-year-old student of Philosophy in Paris, a diary that explored her reality and which she then transformed into a fictional version of her own biography. Throughout, Duval explores themes of friendships, relationships, and national and sexual identity with a more subtle, personal and literary tone than we find in Después de lo trans. There is still great intellectual stimulation for readers, yet perhaps in a way that they can relate to more easily and personally.

In short, what Duval writes about is important. I’ve loved exploring her work, especially because it has allowed me to reflect on a number of essential issues. The time is right to translate Duval’s fresh, strong, and critical voice into English, so that more people can interact with her ideas and begin to think about the powerful arguments she makes.