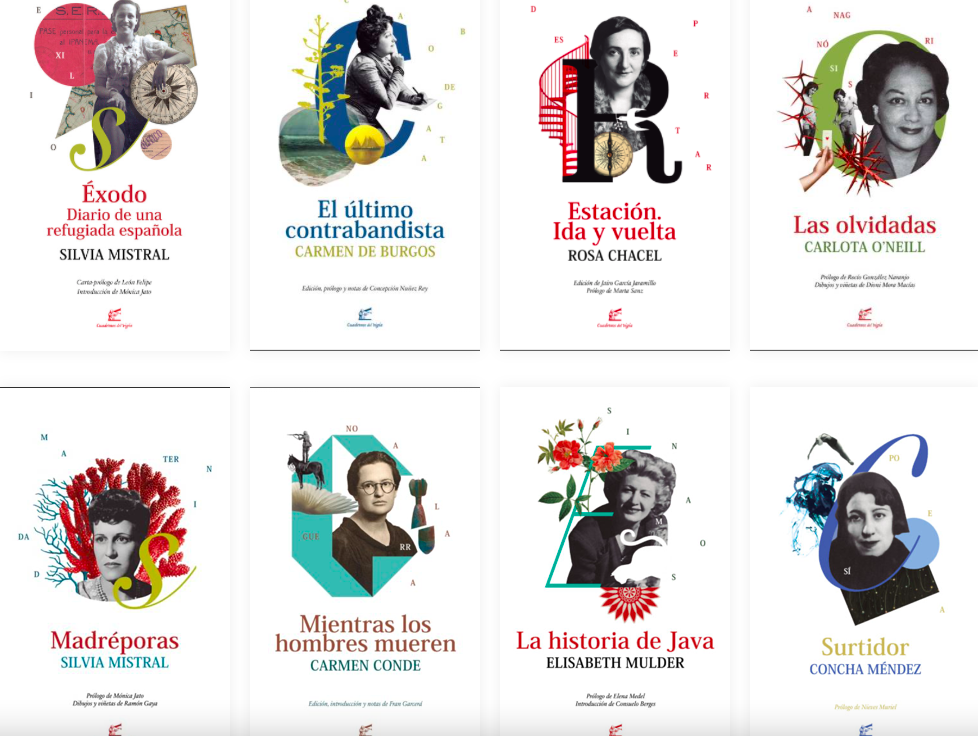 Spain’s Generación 27 was a group of experimental artists and writers who pushed boundaries and changed the way Spain saw art and literature. Generación 27 has certainly left its mark on Spanish literature, with the group’s writers such as Federico García Lorca, Jorge Guillén, Emilio Prados, Pedro Salinas, and Manuel Altolaguirre – to name but a few – being studied, translated and remembered as an essential part of Spain’s literary history. But do you notice something? All of the names I list belong to men. Despite this group being widely spoken about in terms of its influential male members, there were a number of perhaps even more influential women who were part of Generación 27. August is Women in Translation Month in both the UK and US, so what better time to pay tribute to the wrongly forgotten Spanish women of the Generación 27? These women are known as Las Sinsombrero.

Hortensia Blanch Pita was born to Catalan and Galician parents in 1914 in Havana, Cuba, and grew up between the two countries. At just eighteen years old, Hortensia began writing for various Spanish newspapers under the pen name Silvia Mistral. Passionate about film, Mistral also worked for Paramount Pictures and Metro Pictures in Spain. As the civil war in Spain grew progressively worse, Mistral watched the film companies she loved and worked for being forced to burn Republican films and politically-related documents. As a Republican herself, Mistral decided to leave behind her beloved but deteriorating Spain and fled to Mexico where she lived in exile until her death in 2004. Whilst in Mexico she continued to write for newspapers, notably about her experiences of the civil war back in her home country. Perhaps her most famous piece of writing is Éxodo. Diario de una refugiada española. This story offers a deep and personal testimony of Spain’s collective exodus from the perspective of an ‘ordinary’ woman. In fact, this revealing, personal, and incredibly moving account is considered one of the first published diaries recounting the Republican exile experience.

Carmen de Burgos was born in 1867 in Almería to a middle-class family. Deciding to abandon this way of life, de Burgos entered an unhappy marriage to Arturo Asterz Bustos. After several of her children passed away, de Burgos made the bold decision to escape her unhappy marriage and after qualifying as a secondary school teacher, fled to Guadalajara with her only surviving daughter. It was here that de Burgos finally found the space in which to write her first book. Her writing dealt with several topics that at the time were considered taboo, for example, she wrote about homosexuality and feminism, and focused heavily on the double standards women of the time faced. De Burgos took the values that she wrote so passionately about into the real world, bravely leading a campaign to improve the availability of divorce in 1904. In 1906, she became Spain’s first female professional journalist and also served as the first president of the International League of Iberian and Latin American Women. However, all of her political action had its consequences, and during Franco’s dictatorship she was written out of the history books, her work censored or completely removed from newspapers. As a result, despite having a long and fruitful literary career, she is only today getting the recognition she deserves.

Rosa Chacel was born in 1898 in Valladolid. After moving to Madrid to live with her grandmother, Chacel attended a number of artistic schools in the city, it was in these environments that her feminist views were born. In adulthood, Chacel became a regular at the Cafe Granja del Henar and the Ateneo de Madrid, hubs for aspiring writers from all over Spain and Europe. Here, she delivered a controversial speech about women and their opportunities. Despite the power and conviction behind her words, like much of the world at this time, misogynistic views predominated in Spain, and Chacel’s speech was considered nonsense by many members of Madrid’s society. Despite this, she continued to champion her feminist views, and in 1922 began writing for Spanish magazines and newspapers. After brief spells in Rome and Berlin, both with her family and alone, Chacel returned to Spain just before the civil war broke out. This new political situation tore her family apart, with Chacel being forced to move within Spain multiple times with her son. At the end of the war, Chacel and her son reunited with her husband in Brazil. In Brazil, Chacel lived in relative obscurity, and whilst she was well known, she did not produce any new work for a number of years. However, after winning a Guggenheim Fellowship in 1959 she moved to New York City and returned to writing. After years of travelling between Madrid and Rio de Janeiro, in 1977, Chacel returned to Spain for good.

Carlota O’Neill was Mexican-Spanish and was born in 1905 in Madrid. A feminist and leftist, she wrote dramatic works as well as founding and directing the magazine Nosotras in 1934. In 1934, whilst O’Neill was in the autonomous Spanish city of Melilla in northern Africa with her family, her husband was executed for his crime of opposing the military uprising which led to the Spanish Civil War. She herself then spent three years and nine months in prison, and, after her release, moved to her sister’s home in Barcelona with her daughters. Once her daughters were adults, Carlota decided to move to Venezuela, and later Mexico where she wrote Una mujer en la guerra de España, a book in which she recounts her experience of the Spanish Civil War, her time in prison, the military trials she was subjected to, her struggle to regain custody of her daughters once she got out of prison, and her travel to Venezuela. Originally published in Mexico in 1964, it was not published in Spain until 1979.

Carmen Conde was born in 1907 in Cartagena, Spain. Aged seven, she moved with her family to Melilla, where she spent the majority of her childhood before returning to Spain to attend university. In 1924 she began contributing to various local newspapers and in 1931 she founded the first popular university of Cartagena along with her husband. In 1934 Conde published her first book, Júbilos. In 1937 Conde began an intimate relationship with Amanda Junquera Butler, who she had met the previous year.  As a result of the law and social prejudice at the time, neither publicly acknowledged their relationship, nor divorced their husbands. Due to her lifestyle and her Republican views, Conde was immediately marked out as a threat by nationalist authorities. At the end of the war, Conde fled to Madrid with Junquera and went into hiding. In her autobiography, Conde acknowledged her relationship with Junquera, and dedicated many works to her – her partner and muse.

Elisabeth Mulder was a Spanish writer, poet, translator, journalist and literary critic. Though she came from an aristocratic family and inherited the Marquise of Tedema Toelosdorp title, she chose never to make this a part of her life, nor use her title. Mulder spent most of her life in Barcelona, however her cosmopolitan lifestyle saw her travel across Europe, learning languages as she went. It was in this way that she learnt Russian, and in turn, translated Pushkin. She published her first poetry collection, Embrujamiento, in 1927, she also wrote children’s literature and plays. Mulder considered the female poet, journalist, and athlete, Ana María Martínez Sagi, to be her great love, but family and society kept them separated.

Concha Méndez was born into a well-off family and was educated in a French school. In 1919 she decided to travel and spent time in London, Buenos Aires and Montevideo. At just nineteen years old she met Luis Buñuel, and, in fact, was engaged to him for over five years, eventually calling off the engagement as a result of his ‘insufferable character.’ However, with her roots firmly planted in this artistic environment, Méndez became friends with Rafael Alberti, Federico García Lorca, and Luis Cernuda, all of whom encouraged her to join their group – which became Generación 27. In 1926 she published her first poetry collection, Inquietudes. This first collection of poetry focused heavily on nature, and in her later works, Méndez found a stronger and more personal voice. In 1931 Lorca introduced her to the poet and publisher, Manuel Altolaguirre. The pair married the following year and together founded the printing press Verónica. During the Spanish Civil War, Méndez lived in England, France and Belgium, and at the end of the Civil War went into exile in Paris. In 1939 she left Paris for Havana, Cuba. Her last book, Vida o río was published in 1979.

From my brief profiles of each of the Las Sinsombrero, it is easy to see that these wonderful women were ahead of their time. They were politically outspoken and unapologetically feminist – perhaps the very reason they were written out of the history books, and equally, wiped from Spain’s memory for so long.

Finally, however, Las Sinsombrero are getting the recognition they deserve in Spain. This is thanks to a small handful of independent publishing houses, such as the outstanding Cuadernos del Vigía, who are re-issuing the important writing from Las Sinsombrero in their collection La Mitad Ignorada. But whilst these voices are finally getting heard in Spain, only a small selection has been translated into English, compared with many of the men of Generación 27, who have been translated far and wide.

For this all-important Women in Translation month, I’d like to suggest that it is high time that Las Sinsombrero are heard in English. What do you think? Anyone prepared to take up the challenge?