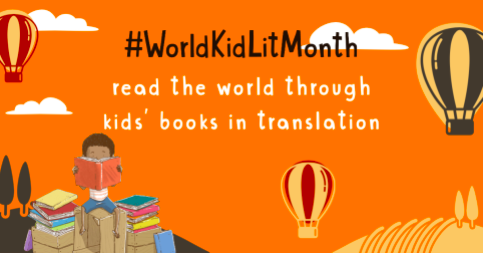 World Kid Lit Month celebrations are now well underway, with the month of September seeing the celebration of children’s and YA literature from across the world. Launched in 2016 by international literature experts Marcia Lynx Qualey, Lawrence Schimel and Alexandra Büchler,  World Kit Lit Month is a brilliant initiative that aims to get translated children’s literature better noticed, appreciated and enjoyed by children, adults, translators and publishers everywhere. So, for this month’s La Española, I’ve invited the wonderful Claire Storey, co-editor of the World Kid Lit Blog, and translator from Spanish and German, to share a selection of her Spanish recommendations for children’s and YA literature.

Spanish books for children and young adults in translation

Happy #WorldKidLitMonth! September is the month to celebrate translated books for younger readers. As part of those celebrations, I’d like to share some wonderful Spanish books for children and young adults.

These new board books have been hitting headlines around the world after receiving a huge backlash from authorities in both Hungary and Russia. Originally written in Spanish by Lawrence, these cute rhyming picture books depict a morning or evening in the life of a young child who just happens to have same-sex parents. The illustrations by Latvian illustrator Elīna Brasliņa are really playful and draw you in. There are now 32 different editions of these books in 26 languages, including three English-language editions published in New Zealand, the US and forthcoming in the UK.

Mexique was the name of a ship that set sail from Bordeaux in France on 27 May 1937. On board were 456 youngsters, children of Spanish Republicans opposed to Franco. The ship was headed for Veracruz in Mexico, and from there the children were transported by train to Morelia on the other side of the country. This beautiful book follows the children as they wave goodbye to their families and set out across the sea. The illustrations, we are told, are based on photographs of the “Children of Morelia” and the ship that brought them to Mexico. With historical notes at the back, this is a really special book.

Toletis is a story of nature and noticing. The book takes us on a journey through the year, with three chapters dedicated to each season. Early in the book, Toletis sees the trees in his town disappearing and sets out with his friends to turn their valley green again. Along the way, we meet the treenie-weenies who are “the souls of all the trees that had been felled in the town over recent years”. We are also introduced to Aunty Josefina and her Wobbegong language. Not all children and more specifically, not all boys are rough and tumble, and this book from Neem Tree Press really celebrates the quiet thinkers.

Maria and Me – A Father, a Daughter (and Autism) by Maria Gallardo and Miguel Gallardo, translator unknown (Jessica Kingsley Publishing)

In this graphic novel, Miguel Gallardo shares memories of a holiday in Gran Canaria with his daughter María. María is 12 and is autistic, “unique – just like everyone else”. Through black and white line drawings and cartoon-strips, with splashes of bright red, we witness the difficulties faced by María and Miguel on their holiday and see how they overcome them. While challenging attitudes towards autistic people, the book is light-hearted and humorous in places. In 2010, the book was turned into a documentary film directed by Félix Fernández de Castro. You can watch the trailer (with English subtitles) on YouTube. The sequel to the first book, María cumple 20 años (María turns 20) is yet to be translated.

The Moon is Red was originally written in Welsh and tells the story of the links between North Wales and the Basque Country during the Spanish Civil War period. The ships that usually transported Welsh coal to the Basque Country and returned with Basque iron for Wales were used to evacuate thousands of Basque children. Set between the two regions, part one follows Megan and her family in Porth Neigwl, North Wales. In part two, we meet Merin and her little brother Anton who are caught up in the bombing of Guernica and are evacuated to North Wales where our Welsh protagonists meet the Basque ones.

Poems the wind blew in by Karmelo C. Iribarren, translated from Spanish by Lawrence Schimel, and illustrated by Riya Chowdhury (The Emma Press)

This is a delightful book of poems that find wonder in the everyday: a plastic bag dreams of becoming a cloud, raindrops go on holiday to the sea, and hats fill up with thoughts. What I particularly love about this collection is that these poems show children that poetry can be about anything, the world around them, and that they too can have a go! At the back of the book, children are actively encouraged to try it for themselves, offering some tips for getting started. This book was highly commended in the Centre for Literacy in Primary Education (CLPE)’s Poetry Award (CLiPPA)

One Million Oysters on Top of the World by Alex Nogués, illustrated by Miren Asiain Lora (Eerdmans Books for Young Readers)

This book has recently received a starred review from Kirkus, referring to the book as “A marvelous combination of scientific inquiry and wonder”.

This is a Dictatorship by Equipo Planeta, illustrated by Mikel Casal (Book Island)

This striking picture book was first written in Spain soon after the end of the Franco dictatorship and set out to explain the dictatorship to the next generation. Forty years later, re-illustrated with stunning images by Mikel Casal (who himself grew up under Franco’s regime), its message remains as timely as ever.

Yet to be translated

Spain is guest of honour at the 2022 Frankfurt Book Fair. As such, the funding bodies in Spain have increased the funding available for translation grants. It’s worth mentioning here that books for children and young adults are also eligible for these grants. As well as these few suggestions, it is definitely worth looking at the recommendations on New Spanish Books, which also includes titles for younger readers.

Described by the publisher as “A poetic text about journeys, displacements, migrations”, the illustrations in this picture book are really special. In his report for New Spanish Books, Richard Mansell says, “Nature, and more precisely observing nature, is also a key theme, as are emotions. This, combined with the constant shift between the micro and macro levels (such as writing becoming paths and vice versa) make this a thought-provoking work.”

Winner of the Edebé Young Adult Award 2021, this is a really fun book which is based on a real-life occurrence. Velia and her friends sign up for a course on World Literature which turns into her and her classmates putting on a stage performance of Cyrano de Bergerac by Edmond Rostand. Laced with humour, this story takes a classic play and literary references and makes them palatable to modern young readers.

By Claire Storey and Alice Banks (aka ‘La Española’)

Claire Storey is a literary translator from German and Spanish. Translating for adults and children, she has a particular interest in books for younger readers. With Ruth Ahmedzai Kemp, she is co-editor of World Kid Lit, a website dedicated to translated books for children and young adults. Claire also speaks in schools about languages and translation, and was named Outreach Champion 2021 by the Institute of Translation and Interpreting. www.clairestoreylanguages.co.uk On Twitter @ClaireStorey16