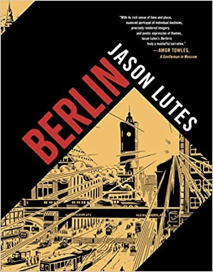 I long wanted to read Jason Lutes classic graphic trilogy of the Weimar Republic, but decided not to do so until it was available in its entirety. A ten-year gap between the publication of parts two and three ensured my wait was longer than expected.

It seems disproportionate that this much-anticipated 580-page omnibus, weighing a hefty 1.9kg, which took more than twenty years to produce, requires a mere handful of hours to read, unless, I suppose, the reader studies every line and shadow. Even when not subject to such scrutiny, Lutes’ monochromatic drawings are both mood-appropriate and impressive: whether they be historically accurate panoramas of Berlin landmarks (ensuring the city is as much a character as the protagonists) or pages packed with smaller, comic-strip panels (some silent, others not).

Running from September 1928 until January 1933, Berlin is punctuated with historic events. Each instalment ends with a moment of significance: ‘City of Stones’ with the May Day Massacre of 1929; ‘City of Smoke’ with the elections of September 1930; ‘City of Light’ with Hitler becoming chancellor. Yet, while there is much education by stealth, Lutes’ main focus isn’t cold historical fact, but human experience. He seeks to ascertain why the people of that time made the decisions they did.

Berlin, therefore, offers a comprehensive snapshot of society. We go into the homes of the impoverished – breeding grounds for extreme ideologies, both left and right, with one family torn asunder when mother and father choose separate paths. We see Jewish persecution. The reality of the persecuted is contrasted with the indifferent, pleasure-loving behaviour of aristocrats who, in time, became Hitler’s useful idiots. The intellectual, pacifist viewpoint is represented by the journalist Kurt Severing, his job granting access to almost all areas, his deteriorating state of mind serving as a barometer for the disintegration of the Weimar Republic.

The narrative, however, begins and ends with the arrival and departure of Marthe Müller, a bisexual art student who is seeking independence from her conservative parents. Her adopted bohemian lifestyle enables Lutes to explore both Weimar’s (in)famous sexual licence and the conflict raging within the art world at that time: New Objectivity versus Expressionism. Performing arts are also given space in a light(er)-hearted interlude at the midpoint, with an entertaining cameo from Josephine Baker and the arrival of a black American jazz band, The Cocoa Boys.

Berlin places us in the midst of a chaotic, increasingly violent metropolis. Surprisingly, though, swastikas put in a late appearance, with Lutes drawing empty white circles on Nazi uniforms and flags – perhaps to relieve his story of the weight of historical baggage and to make readers think, as did many, that the Nazis were a force to be ignored. However, the epilogue of four city landscapes, depicting the scars that Berlin wore during the following decades, underlines the ramifications of such insouciance. It is a powerful reminder of the need to prevent history repeating itself.

Published by Drawn and Quarterly (2018)