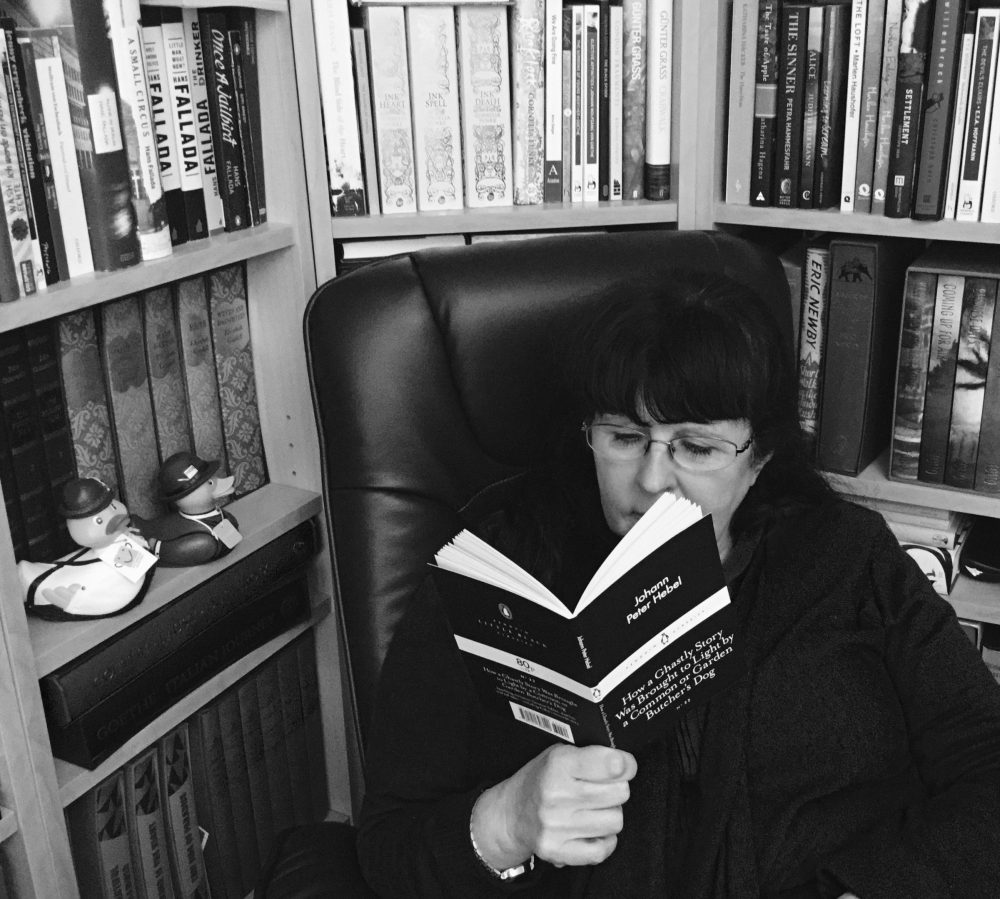 #RivetingReviews: Lizzy Siddal reviews HOW A GHASTLY STORY WAS BROUGHT TO LIGHT BY A COMMON OR GARDEN BUTCHER’S DOG by Johann Peter Hebel

As co-hostess of German Literature Month, November is, of course, the highlight of my reading year. Despite having over 200 unread translations of German literature in the house, this year I decided that I would read and review at least one new-to-me recommendation. But never in my wildest dreams did I expect it to be a selection of stories, published in 1811! Moral fables from the early nineteenth century? They might be hard to swallow. So I spent just 80p on the Penguin Little Black Classic as a 26-story sampler of Johann Peter Hebel’s The Treasure Chest and never has so little money been spent on so much pleasure.

These stories were everything that was promised … even with their moral tinge. And that’s because Hebel was a pastor who understood not to sacrifice the entertainment value of his tales, and one who might have been a little subversive at times. In his stories, the bad guys don’t always get their just desserts!

Though some do. In the story from which the Little Black Penguin takes its title (known henceforth as How A Ghastly Story…) two murderers are undone when, after they have killed a travelling butcher for his money, as well as their own child who witnessed their crime, the butcher’s dog uncovers the corpses. The conclusion, as Hebel reports it, demonstrates a black sense of humour and the twinkle in his eye, which can always be glimpsed in his narrative style.

The criminals were taken and brought to court. Six weeks later they were put to death, their villainous corpses bound to the wheel, and even now the crows are saying, “That’s tasty meat, that is!

Stories such as Unexpected Reunion (incidentally Kafka’s favourite story) have a more emotional register. A week before their wedding a couple are separated forever by a fatal mining accident. 50 years later, the well-preserved body of a young miner is brought to the surface. No one recognises the corpse or even remembers the accident from so long ago. Until his former bride-to-be hobbles up on her crutch. As the only person laying claim to him, she gives him a decent burial. Who can fail to be moved at her parting words?
Sleep well for another day or a week or so longer in your cold wedding bed, and don’t let time weigh heavy on you! I have only a few things left to do, and I shall join you soon, and soon the day will dawn.

In his essay, included in A Place in the Country, W G Sebald discusses Hebel’s vision of a better world designed with the ideals of justice and tolerance in mind. Of course, his is a nineteenth century vision, not necessarily aligned to twenty-first century values. (Though the way I’m feeling right now, I’m not convinced of the latter. But that is a completely different story.) It is also a vision with biblical precedents – as is to be expected from the pen of a Lutheran pastor. Some of this can be seen quite clearly in stories like The Clever Judge, a witty reworking of the Solomonic judgement, in which the judge is asked to adjudicate, not over two mothers fighting over a child, but a package containing 800 thalers.

In the introduction to The Treasure Chest (because, of course, I have now purchased the Kindle edition to carry around with me on my phone for some cheering company, whenever I have a spare 5 minutes), Hebel’s translator, John Hibberd discusses the author’s enduring appeal. Regarding the naturalness of his writing, he says:

It was undoubtedly that secure naturalness that appealed so strongly to Kafka as a contrast to his own abysses of uncertainty. Hebel had no problems deciding what was true and what was right, when it was appropriate to laugh and when to cry, and the modern reader may well, like Kafka, find welcome relief from some of the products of modernism (and its successors) in an author who is eminently accessible, is not ashamed of sentiment, is cheerful and humorous and sane and humane.

Hebel’s vision is all the more remarkable given the times he lived in. Tumultuous is the least that can be said of the Napoleonic era during which Hebel’s early hopes that Napoleon would herald beneficial change were gradually dashed. And yet, he never lost his sense of humour.

I’ll leave you with the final story in “How A Ghastly Story ... ”. It’s always good to end on a laugh, whatever the circumstances.

Now and then someone drunk has the occasional notion or good idea, as a fellow did one day who didn’t take his usual path home from town but walked straight into the stream running alongside it instead. There he met a good man ready to offer a hand to a fellow, even a drunk one, in trouble. “My good friend,” said the man, “haven’t you noticed you’re in the water? The footpath’s over here.” He too, replied the drinker, generally found it best to use the path, but explained that this time he had had one too many. “And that’s just why I want to help you out of the stream,” said the good man. “And that’s just why I want to stay in it,” replied the drinker. “Because if I walk in the stream and I fall, I fall on to the path, but if I fell when walking on the path, I’d fall into the stream.” And that’s what he said, tapping his forehead with his index finger, as if to show that he still knew a thing or two that might not have occurred to anyone else, despite being a bit the worse for wear.

Translated from the German by John Hibberd and Nicholas Jacob

Lizzy Siddal is a British bibliophile, resident in Scotland.  She has dreamt of retiring to Germany for the last 25 years, and has “kept in touch” by reviewing lots of translated German-language literature on her blog, Lizzy’s Literary Life.  She has also co-hosted German Literature Month for the past seven years.  With current events as they are, her retirement plan is now on hold.  This means that she’s just going to have to continue reading and reviewing translated German-language literature (though not exclusively) for the foreseeable future …