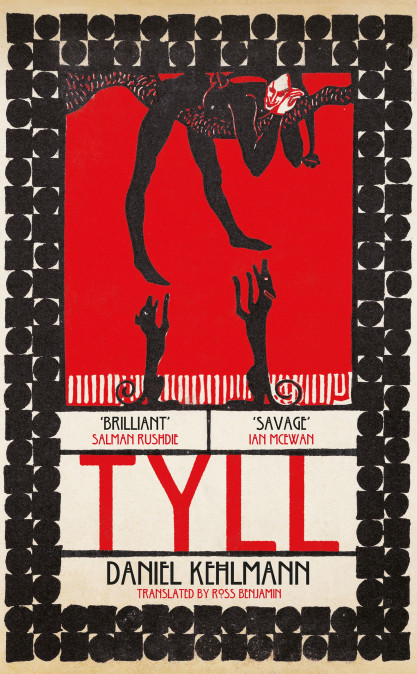 ‘German has no future. First of all, because it’s an ugly language, viscous and unclean, an idiom for unlearned people who don’t bathe.’

Daniel Kehlmann is at his best when he’s being outrageous, and there’s plenty of scope for that in his latest release, which places the fourteenth-century Tyll Ulenspiegel slap bang in the middle of the Thirty Years War (1618–1648). But the words quoted above are not Tyll’s; they come from the German Jesuit, Athanasius Kircher (who naturally preferred Latin).

Kircher is one of many to become acquainted with Tyll as he traverses the length and breadth of a war-torn Europe, earning his crust as a travelling entertainer, pillorying all and sundry, regardless of rank, (thereby using a jester’s licence to the full) and playing practical jokes on an unsuspecting public. The prologue throws us straight into this, with Tyll at the height of his powers, turning a village fete into a village brawl.

Kehlmann then returns to the harsh details of Tyll’s bullied boyhood and the events that led him to adopt an itinerant life. Running away following his father’s execution for witchcraft is the first example of Tyll making a timely exit, a vanishing trick he repeats again and again – for, while he is an entertainer and a prankster, he is foremost a survivor. After the opening third, however, he steps back from the action, as historical figures take centre stage in an episodic structure that cleverly incorporates the entire span of the Thirty Years War, from the Defenestration of Prague to the Peace of Westphalia. Yet Tyll pops up in every episode of this picaresque, not just to entertain, but to expose the hypocrisies of the ruling classes, to provide comfort to a dying king, and even to steal a donkey!

This structure enables a montage of memorable scenes: from one moment to the next a ride through the forest turns into a massacre; a walk through a plague-ridden military camp brings stench and disease uncomfortably close; the deposed Queen of Bohemia negotiates her son’s future while fretting that her seat has no back support. The frequent switching between protagonists requires more exposition than a chronological historical novel would, but as I have been fascinated by the Thirty Years War since standing before that window, I found this highly informative.

In addition to the religious and political fighting, there is an ongoing battle between superstition and rationality, embodied in Athanasius Kircher, quoted earlier, who is also instrumental in the execution of Tyll’s warlock father. Some twenty-five years later the scholarly professor of the Collegium Romanum is seeking a cure for the plague. He goes on a dragon hunt, armed with a protective spell, the likes of which condemned Claus Ulenspiegel. The bigger surprise is that he must employ it…

Don’t be put off by the historical fiction tag; Kehlmann is incapable of creating dry and dusty prose. The inclusion of fantastical elements (a dragon hunt no less!) into an otherwise well-researched historical novel is the ultimate proof of this.