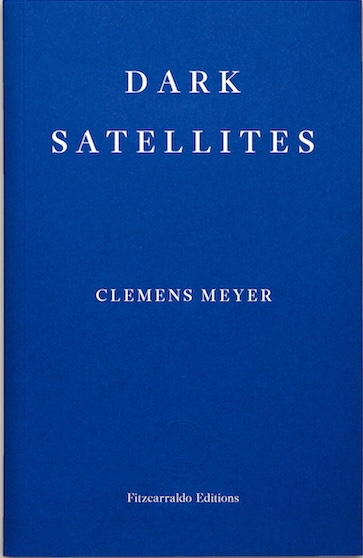 ‘I’ll send it anyway’, said the publicist when I intimated that Clemens Meyer and I didn’t gel. (I’d DNF’ed All the Lights and have no interest in the sex-trade novel.) Though I had to admit that translator, Katy Derbyshire, had conjured up such an intriguing title for this second collection of stories, I was already being pulled into the orbit of Meyer’s Dark Satellites. I like the original German title too, ‘Die stillen Trabanten’, but agree that ‘Quiet Trabis’ wouldn’t exert the same pull on an Anglophone audience.

Not that we’re being projected into outer space. Meyer’s satellites are planted firmly on home ground. He uses the image more than once to denote ‘those tall high-rises on the edge of town, where the lights went out slowly in the night, flat by flat, window by window’. His stories, like the high-rises, are populated with those on the edge. Some are fully fledged outsiders, others on their way to becoming so, slipping through the cracks of society or the cracks in their own experience.

None more so that the unnamed professional in the appropriately named ‘The Crack’, who returns home to find his flat has been burgled. Initially he holds himself together, but then, his sense of security disturbed, the unravelling begins. The crack of light coming from his slightly ajar front door is mirrored in his head, widening eventually to form a proper schism.

The two men in ‘The Beach Railway’s Last Run’ are both dealing with emotional trauma; the younger from a recent separation; the source of the older man’s pain being a decision he made years ago from which he has never recovered. He reveals his regret only after a series of conversations with the younger man as they sit on benches, staring out over the ruins of the old beach railway.

The set-up of two strangers making a casual acquaintance is repeated in my favourite story in the collection, Late Arrival. In this case, two women – one a train cleaner, the other a hairdresser – strike up conversation in a station bar. They meet only when the end of their shifts coincide, and their conversations are quite superficial. But, underneath there is a mood best described as ‘Hopper-Nighthawks’ (I couldn’t stop thinking about this painting as I read.) The women are lonely and in need of more meaningful friendship. Are they able to convert?

I can’t think of a weak story in the collection, although there were a couple that didn’t resonate as powerfully as the three I’ve mentioned above. What I particularly enjoyed was the mood-setting. Whether it be fear, melancholy, regret, loneliness, mood vibrates from the page. I was completed surprised by how much I wanted to read another story, and am still surprised by how much I miss them, now that I’ve finished. Clare from Fitzcarraldo obviously knew something I didn’t. So thank you for the review copy. Its success calls for a drink in celebration. Given the appearance of a certain Baltic pirate in the final story, it has to be …

This review was originally published on Lizzy’s Literary Life: lizzysiddal.wordpress.com/