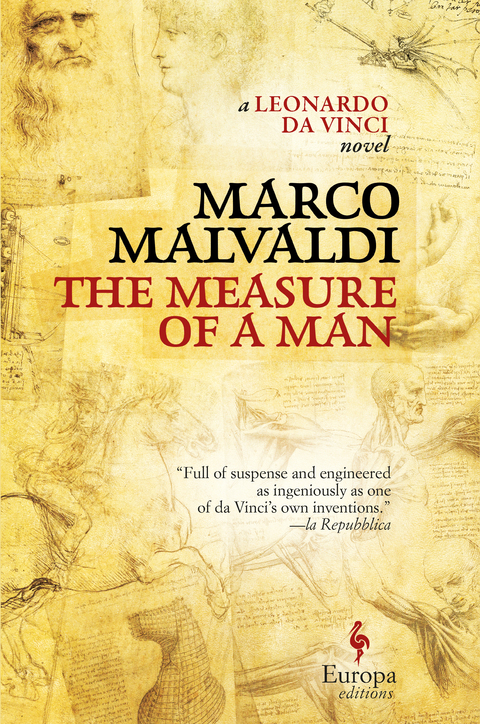 #RivetingReviews: David Hebblethwaite reviews THE MEASURE OF A MAN by Marco Malvaldi

It is 1493. Renaissance Milan is ruled by Ludovico Sforza, known as il Moro. Ten years earlier, Leonardo da Vinci wrote to il Moro, boasting of his engineering prowess and saying that he would build a bronze horse in memory of Ludovico’s father. Six years later, Ludovico entrusted him to do just that.

Ludovico is still waiting. Well, a clay model of the horse will be ready by the end of next week. Il Moro might be starting to lose his patience.

But there’s a lot going on in Milan right now. Ludovico’s niece is due to wed the Holy Roman Emperor Maximilian at Christmas. King Charles VIII of France has sent a couple of envoys to Milan on a mission to steal the notebook in which Leonardo is rumoured to have recorded his most secret designs. And a young man is found dead in the castle courtyard, a mystery that can only be solved with input from Leonardo himself.

If I were to choose an adjective to describe Marco Malvaldi’s narrative voice, it would be ‘mischievous’ – a quality that really comes through in Howard Curtis and Katherine Gregor’s translation. He will frequently drop in an aside that reminds you you’re reading a piece of historical fiction:

‘But Charles VIII, who had no experience, had convinced himself, on the basis of his reading, that in order to subjugate Italy to his will all he had to do was make up his mind and set off; something that still occurs to some of us nowadays, the difference being that instead of poems we have convinced ourselves that all it takes is the internet.’

This technique doesn’t break the spell of the book – rather, it is part of the spell. As a period, the Italian Renaissance is defined by change, a world evolving into something else. It’s fitting that Malvaldi gives the sense that the setting of his novel is provisional. And, just as the world has not been ‘solved’, neither is the murder mystery at the book’s heart; the truth of what has happened emerges almost incidentally, rather than from an active process of detection. Da Vinci comments during the novel that ‘the measure of a man’ lies in ‘growing and learning’. That’s what happens to Malvaldi’s characters and his world – and, perhaps, to his readers as well.

THE MEASURE OF A MAN

Translated from the Italian by Howard Curtis and Katherine Gregor