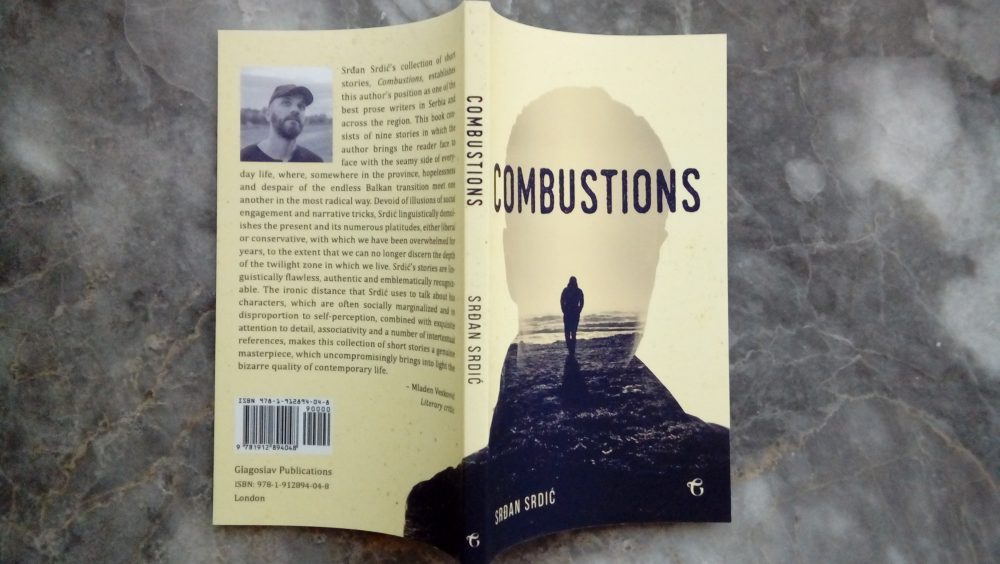 Reading a story by Srđan Srdić (who is an editor at my Serbian publisher) is a little like observing the literary equivalent of chromodynamics – undiscovered fields where surprising momentums and longitudes set up conflictual forces, culturally or gender-based, often historical, and always coming at you from unanticipated directions. The sources may be familiar to a Western European or American reader possessing a little knowledge of post-Yugoslavia, but because the terrain is intrinsically personal, it feels as yet unexplored by science, politics or literature. More than once I found myself imagining cinematic landscapes reminiscent of Tarkovsky (whose Ivan’s Childhood, set in WW2 western Russia, was based on a short story by Vladimir Bogomolov), or of Béla Tarr’s Satantango (set in the Soviet era in Hungary, also based on a novel by László Krasznahorkai). His stories flip between post-war anxieties, surveillance, corruption, dis/order and acts of aggression, to the arousal of unexpected warmth, and even political hope. All this is complicated by the factor of implied loyalties.

The principal field is composite and generated by various narrators, but behind that is the field from which the literary voice of Srđan Srdić emerges. His writing suggests first-hand experience of authoritarian hierarchies, from the military to the industrial to the social. His males often enact some flagrancy or other, and find themselves hanging out in in-between spaces – by rivers or in the hotels of desperate, unmotivated tourists.

The opening story, ‘Good Night Captain’, is a monologue with footnotes in the voice of the narrator’s wife. The biographies of both characters bring violence and gang behaviour as well as personal violations and offences. So from the start, we are thrown into a world of formal experimentation and neo-narratological play with temporal and perspectival distortion.

The subsequent stories do not disappoint. ‘Mr President’ seems to roll many of Theophrastus’s unpleasant characters into one extremely unpleasant person, a local politician working in a fictional regional department. ‘The Leaden Carousel’ is another soliloquy, a tense tale set among a sample of post-hostility communities in Northern Serbia. Violence in this story, at least, is deflected, ineffective. The protagonists are depressed, their world in ruins. A deaf-mute boy is at its heart.

‘Golem’ features another river, the Vltava, the longest within the Czech Republic. At first sight, we are offered the interior monologue of a meandering misanthrope who has become spiteful and reactionary with age. Suffice to say he becomes those he hates.

There are touches of the Saint Petersburg mad soul Gogol here, and of the Irish Parisian Joyce in Espirando, a tableau of agrarian poverty, rustic custom and the psychometry of ancestral inheritance.

We finish with a man, a writer, in the maze of streets down which he had to plunge in order to reach the school, the little one past the university and a butcher’s shop. The boy, himself, traverses a landscape at once socio-geological, geo-political, politico-cultural and spatio-mnemonic. The author of Combustions was born in 1977, making him fifteen in 1992, when the wars began that heralded post-Yugoslavia.

Translated from the Serbian by Nataša Srdić

William (Bill) Direen, is a writer, performer and freelance researcher. He has published in all genres, and released music albums with many collaborators. He lived in Europe for some years before returning to his native New Zealand. In 2010, he was awarded the Michael King University of Auckland Fellowship for writers. He is the subject of a documentary Bill Direen: A Memory of Others (2016), directed by Simon Ogston.