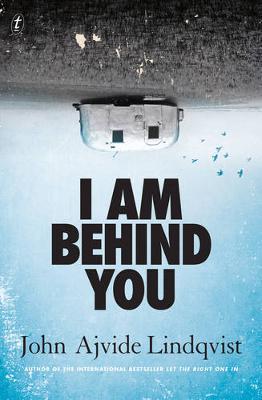 #RivetingReviews: David Hebblethwaite reviews I AM BEHIND YOU by John Ajvide Lindqvist

‘Well, go to the toilet then.’

Okay, maybe this is not so innocuous coming as it does from the pen of John Ajvide Lindqvist, the Swedish horror writer, best known for his debut novel Let the Right One In. But it’s a small chuckle for Isabelle.

That opening exchange is between six-year-old Molly and her mother, Isabelle. They’re on a caravan holiday, but the entire campsite has disappeared, save for four cars, their caravans and occupants; there is just an empty space left, an expanse of grass all around and no sun in the sky. Ajvide Lindqvist examines his characters mercilessly in this nothingness: glamorous Peter and Isabelle with their daughter Molly; another family, Stefan, Carina and their son Emil; an older couple, Majvor and Donald; and Lennart and Olov, two old friends who have lived together since their wives left them.

As the novel progresses, we learn about each character’s past. It turns out that even a couple like footballer Peter and model Isabelle, who might appear perfect to outsiders, have their dark secrets. The strange nothing-world brings these secrets out, to the reader’s eyes at least: the characters themselves only catch a glimpse of their personal bogeymen, spooky figures from their childhood that may (or may not) be supernatural. It could be that the space in which the characters find themselves is built from the dark side of their imaginations. Then again, Donald thinks the whole thing is his own elaborate dream, so who knows?

I Am behind You takes its time to unfold – sometimes a little too much time, as the book can drag in places – but stick with it and what unfolds is a tale in which the horror ultimately comes from within, and all the supernatural paraphernalia simply exist to help coax it free.

I AM BEHIND YOU