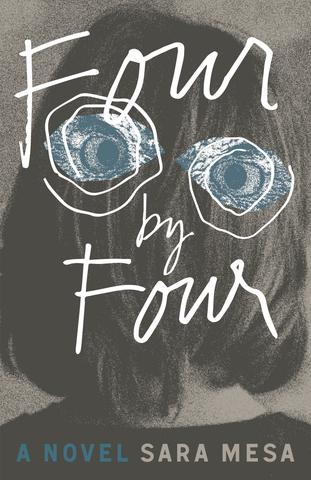 Sara Mesa’s Four by Four is a novel of secrets revealed gradually. Its three sections progressively, though obliquely, uncover the happenings at Wybranwy College, an isolated boarding school that may be a refuge from the outside world, or an enclosure for those in its grounds.

In the first part, we meet a number of Wybranwy’s students, most notably Celia and Ignacio. Celia is one of the ‘specials’, a scholarship student who wishes she could go back to where she came from. We are introduced to her as she’s leading a group of college children on an excursion – or maybe an escape attempt. Ignacio is bullied, but the sight of a new boy named Héctor gives him hope for friendship, or even more. Neither Celia nor Ignacio will get exactly what they want, though.

Besides the pupils, we also follow some staff members, who have only job titles rather than names at this stage. The sight of the headmaster having his way with the assistant headmistress (nicknamed ‘the Booty’) is a sign that noxious forces are at work in Wybranwy; but that’s not the half of it.

The book’s second part is the diary of one Isidro Bedragare, a substitute teacher newly arrived at Wybranwy College – though, as we soon discover, he’s not really a teacher at all. Some of the names and faces change in this section, for example, the headmaster is now ‘Señor J.’, and Ignacio’s personality seems different, which creates a subtle sense of disorientation. Isidro gets closer to the truth of what is going on at the college, but teaching staff are going missing, and you never know who might be next…

The final section of Mesa’s novel consists of papers left by Isidro’s predecessor, García Medrano. These tell an abstract tale of girls living in a series of four-metre-square cells, which forms an allegory for the events at Wybranwy.

This is a creepily atmospheric piece of work, in which Mesa uses her tale of a fictional institution to examine the use and abuse of power.

Translated from the Spanish by Katie Whittemore