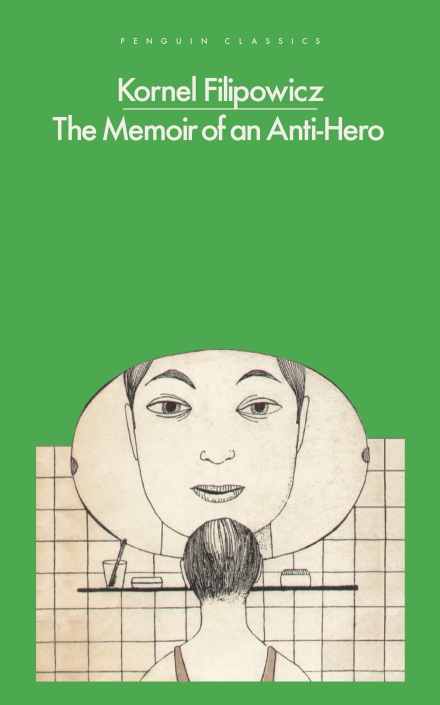 #RivetingReviews: Ursula Phillips reviews THE MEMOIR OF AN ANTI-HERO by Kornel Filipowicz

Originally published in 1961 in ‘Peoples’ Poland’ and now translated for the first time into English, The Memoir of an Anti-Hero describes a nameless fictional narrator’s conduct during the German and then Soviet occupations of a town in western Poland during World War Two. As a citizen of pre-war Poland, the expectation of his compatriots is that he, like they, should be prepared to die for his country, in keeping with the self-sacrificial ideology of generations of Polish freedom-fighters. Unwilling to take up arms or die, he mocks what he calls this absurd position (‘I’m not qualified for heroism. […] I feel absolutely no desire to risk death merely to attain posthumous glory’) since his own desire is to survive along with his material belongings, which he does.

It becomes clear that, although a Polish citizen, the anti-hero is a Volksdeutscher, which enables him, in the interests of self-preservation, to play one identity off against the other – for example, when he works for a German company. After the Soviet occupation in 1944, he is tried as a collaborator; but his carefully calculated relationships with his Polish neighbours under the Germans ensure that they testify in his favour and he is released.

This is not an autobiographical account of Kornel Filipowicz’s activity during the war. Filipowicz was not a Volksdeutscher, did not collaborate with the Nazis, and spent time in German concentration camps. The date of publication, however, gives pause for thought, suggesting a more universal frame of reference than the occupation or traditional Polish conceptions of heroism.

Tangible in the Memoir is the existentialism prominent in European literature of the 1930s–1950s. The anti-hero is above all a committed individualist, detached from mainstream society, to which he feels intellectually superior. The 1961 narrator – uncensored, as far as I can ascertain – projects an existentialist protagonist onto the war-time experience, thus making him an anti-hero of early 1960s Poland too, or indeed of any context where he may face the pressures of ideological conformism.

If not country or ideological affiliation, what then is the ultimate value? The clue is perhaps in the epigraph, a quotation from Antoine de Saint-Exupéry’s Night Flight (1931): ‘Although human life is priceless, we always act as though something had an even greater price than life … but what is that something?’ Moreover, the anti-hero is not the only character who survives: at key moments, he notices ‘with joy’ the ‘immortal, indestructible old lady’ sitting on the balcony opposite: ‘You know what life is worth. You know that best of all – every day – there’s your stool, your helping of groats, a cup of tea, a grated apple. It’s worth living just for this!’

Yet he leaves the reader feeling uncomfortable. Is it his deliberate suppression of conscience? Confronted by uncompromising evil, is thinking only of saving one’s own skin acceptable? Isn’t this exactly what the dictators wish for, because it offers no active resistance?

The provocative questions underlying the Memoir are typical of a deep reflectiveness also evident in Filipowicz’s short stories, a number of which we may expect later in English from this same sensitive translator.

THE MEMOIR OF AN ANTI-HERO