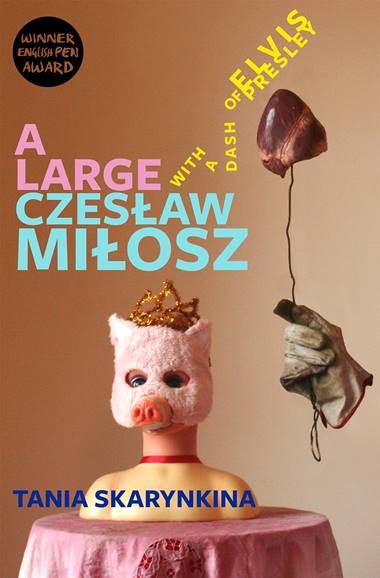 This collection of stories – strictly speaking essays – by contemporary Belarusian poet and journalist Tania Skarynkina depicts the day-to-day difficulties, absurdities and pleasures of life in her native Smarhoń, a provincial Belarusian town not far from the present-day Lithuanian border.

Historically, the place has changed hands several times, and Polish, Lithuanian and Russian influences continue to impact on its identity. The birthplace of Yiddish poet Abram Sutzkever, Smarhoń lost its predominantly Jewish population during the Nazi occupation. This theme does not feature, however. Skarynkina portrays instead the late Soviet years and her own childhood, including an amusing account of the junior journalists’ camp in Artek, Crimea. Her principal emphasis, though, is on the pluralistic 1990s, when Belarus regained independence – a period of political upheaval and indeed of hope, before Lukašenka established his grip on power in the early 2000s. For part of this time, the author lived outside Belarus, which perhaps is partly why she is able to write with such irony: many essays contain the cryptic ‘when I was in Portugal’; she then discusses this time in colourful detail in ‘Rabbit Meat, Gypsies and the Ocean’.

Originally written for a web portal, the pieces were collected and published in Vilnius in 2015. The essay title ‘A Large Dose of Czesław Miłosz with a Dash of Elvis Presley’, which is used, in slightly modified form, for the book, refers to features of the whole collection: Skarynkina admires the Polish poet and quotes his poetry, where she discovers thoughts that coincide with her own. On a chaotic trip to meet him in Kraków, she fails to find his address yet is not disappointed; unencountered in reality, Miłosz remains on his pedestal, just like that other idol in his gold lamé suit.

Throughout this collection, ostensibly unconnected subjects are similarly linked in humorous fashion: ‘Figure Skates and Dead Classmates’, ‘Pork Knuckle and Stuffed Camel’, ‘Onegin and the Surgeon’. The structure of each essay hinges on these apparently serendipitous associations, which are made with imaginative flare. The words ‘by chance’ or ‘magical’ occur frequently, and coincidence abounds, reminiscent of the Surrealists’ ‘objective chance’, while the author’s (actual) dreams contribute a large proportion of the material.

These essays also reflect Skarynkina’s phenomenal knowledge of Russian and world literature, Soviet and western cinema, and even popular music, thus rendering them accessible to a wide audience, as do the tension between the reality portrayed and the promise of a more vibrant one (as in ‘A Window on Another Life’).

Skarynkina is intimate and direct, sensitive but not sentimental, a balance sustained throughout by the translator. She does have, however, her serious side. Constant references to older female members of her family (her mother and mother’s three sisters) allow Skarynkina to recreate with sympathy the Soviet, but also traditional religious, contexts in which these women lived their lives; and her lack of deference to female stereotyping is notable. Her own experience reflects the high level of alcoholism, violence and early death among Belarusian males (the ‘dead classmates’), though.

Some experiences of ‘domesticity’ are universal, however. The attachment to family porcelain (‘Three Generations of Domestic Porcelain’) definitely strikes a chord, as it does with Czesław Miłosz, demonstrated by his ‘Song on Porcelain’.

A LARGE CZESŁAW MIŁOSZ WITH A DASH OF ELVIS PRESLEY

Translated from Belarusian by Jim Dingley

Ursula Phillips is a British translator from Polish and a writer on Polish literary history. Recent translations include novels by Zofia Nałkowska, Choucas(1927) and Boundary(1935), which received the Found in Translation Award 2015 and the PIASA (Polish Institute of Arts and Sciences of America) Wacław Lednicki Award 2017 respectively.