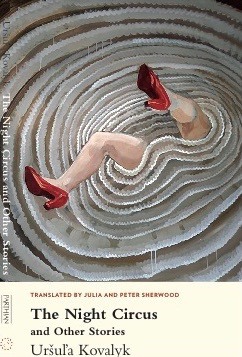 The Night Circus and Other Stories is the second work by Uršuľa Kovalyk to appear in English, following her novel The Equestrienne (2016). The fifteen stories fuse tragedy and absurdity with flights of unbridled imagination. Rooted in the everyday world of post-communist small-town Slovakia, Kovalyk portrays the bizarre situations that often emerge from common human experience, such as the race against time and daily enslavement to ‘the strict inspector sitting inside of me’ (‘Go Slow Therapy’).

The historical context appears secondary but is often tangible, not least in the all-pervading drabness of the stories’ surroundings – as much a feature of tacky capitalism as of the grey communist past. Kovalyk’s narrators and heroines are chiefly postmenopausal women reflecting with self-deprecatory irony on their deteriorating bodies and social marginalisation; or they are younger women just about surviving in oppressive marriages, trapped by unexciting sex, caring for unappreciative men in uninspiring, functional flats. The settings are the safe (or apparently safe) domestic confines of mundane bedrooms and kitchens, ordinary streets, trams and private cars. No wonder then that Kovalyk’s women long for less predictable lives, unbound by the constraints of normality or even by the laws of physics. A strongly feminist perspective expresses itself in the way such longings materialise, often independently of a woman’s consciousness, in dreamlike experiences presented as real – full of vibrant colour and luscious sensuousness, where women are literally rejuvenated. The magical events usually happen at night, during the witching hour, a full moon being specifically mentioned.

Thus in ‘The Bathroom’, Ágnes Mickiević, unable to sleep beside her hyperallergic husband, watches her bathroom transform into a tropical forest. She compares this to a drugged-induced hallucination, though she has never taken hallucinogens. But when it repeats itself night after night, ‘somewhere deep inside her, behind her lowest rib, a tiny part of the soul she never knew she had started to peel off’. Magdaléna, meanwhile, who emits ever louder music as weird fibres emanating from a wart on her cheek spread across her body, eventually flies away as a huge white bat (‘Lace’).

The title story describes how the lonely heroine participates as willing victim in cruel parodies of traditional circus acts, if only to experience some extreme sense of being alive:

‘She’s laughing maniacally. More, she shouts. […] her brain is gripped by an insane ecstasy’.

A symbol of feminine wilfulness is the pair of ‘unruly’ red shoes kept atop a wardrobe as a reminder of transgressive possibilities beyond ‘that dismal, god-awfully ordinary day’ (‘Red Shoes’). This story contains, however, something more sinister: violent sexual demands to which women invariably submit even when they have no wish to. The red shoes symbolise the fight back: ‘My sense of freedom grows with every kick’. This painful dimension is also foregrounded in memories of childhood abuse and parental neglect (‘Suicide’, ‘An Average Dead Father’) rendering these stories compassionate – and not always funny – vignettes of contemporary life.

THE NIGHT CIRCUS AND OTHER STORIES