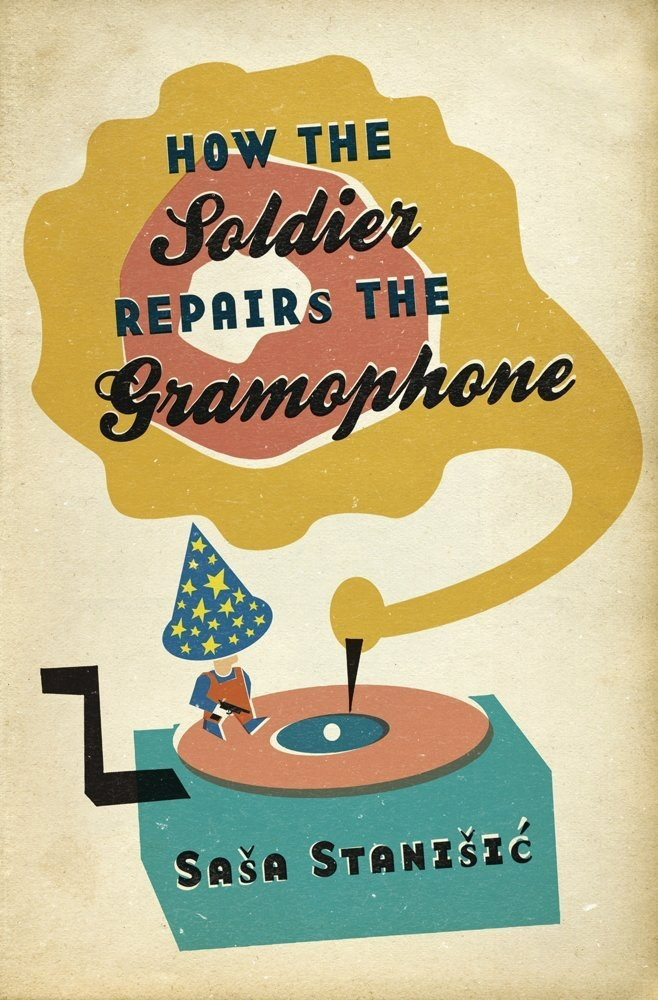 #RivetingReviews: Silvia Sovic reviews HOW THE SOLDIER REPAIRS THE GRAMOPHONE by Saša Stanišić

‘How much less does a spider’s death weigh than the death of a human being?’ a boy called Aleksandar asks himself on the day his Grandpa Slavko dies. ‘And how do you photograph a life that’s over?’ How, indeed? Anyone who knows anything about the Balkans will understand that the rituals of death are taken very seriously in this part of the world; a time of chaos, grief and laughter, not only for the extended family but for the whole neighbourhood, and beyond. Stanišić’s novel begins with just that: a shouty funeral that might have featured in a movie by eminent Serbian filmmaker, Emir Kusturica (though this is much more sombre and compelling).

Aleksandar Krsmanović is a teenager who has a seemingly normal childhood, surrounded by his extended family and macho friends, in the small town of Višegrad, the same setting chosen by Ivo Andrić half a century earlier for his Nobel-Prize-winning novel The Bridge over the Drina. Notwithstanding the funeral, Stanišić’s layered novel begins with a light touch. He introduces the reader to Aleksandar’s long list of family members and the larger-than-life characters who are his friends. But something is not as it should be. The penny begins to drop for Aleksandar as he casually compares family traditions:

‘When a baby is born or someone gets married in the Pešić family or in ours, we exchange visits. The families are godparents to each other’s children or witnesses at weddings. My mother says I didn’t have a Pešić godparent, though, it has something to do with her and the religion on her side of the family. Nothing bad, says my mother …’

Confronted with binary choices in school soon after, Aleksandar is left confused. ‘I’m a mixture. I’m half and half’,he ponders. ‘There was everyone in the school yard wondering how I could be something so vague …’But his background – he has a Serbian father and Bošniak mother – is a blessing in disguise, especially when one day the soldiers storm into his village and insist on knowing everyone’s name. ‘Hands up! What? Papers! What’s your name?’they shout, as they ransack house after house in their ruthless hunt for Muslims. Asija, a girl from the same block of apartments as Aleksandar, who plays the violin, is sitting on a step nearby, frightened. They have taken her Bošniak parents away because they have ‘the wrong sort of name’. Aleksandar, who has‘theright sort of name’, tells the soldiers she is his sister, Katarina. They hide in the attic. ‘In one of those dark moments Asija whispers: don’t forget me!’These are the words that will haunt Aleksandar’s memory years later when he and his family escape and finally settle in Germany.

The author’s narrative is soulful and witty. He skilfully balances the ordinary with the extraordinary, the factual with the absurd, the horrific with the poetic. Aleksandar is trying to make sense of his history, but it is Asija he can’t let go of. She becomes his trauma, the terror of his past, his lost childhood. He writes: ‘Do you happen to know a woman called Asija? It’s not a common name, maybe you’ve heard it … the name means bringer of peace, I’m looking for my own Asija and can’t be at peace until I know what’s happened to her …’ Asija represents his identity as above all human: protean and uncategorisable. These qualities are reflected in the structure of the book. Indeed, one of its strengths is the way the author builds on his own mixed heritage. The polarisation of Bosnia has squeezed out these hybrid identities in fiction as it did so tragically in real life.

How the Soldier Repairs the Gramophone was much acclaimed in the German-speaking world, where it has also been dramatised. Anthea Bell’s excellent translation won her the Oxford-Weidenfeld Prize in 2009. I found the writing completely absorbing. Part of me wonders how a non-Yugoslav audience will respond to the many cultural references from the period; but that should not stop anyone from reading this original and powerful book, so relevant in the present climate.

HOW THE SOLDIER REPAIRS THE GRAMOPHONE

Translated from the German by Anthea Bell