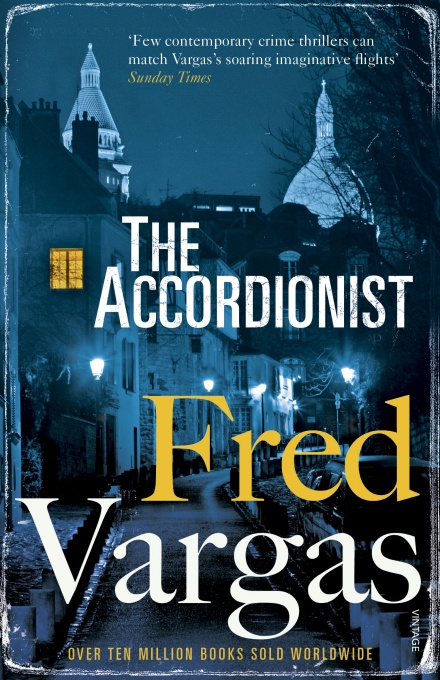 I am the Dark One, – the Widower, – the Unconsoled,

The Prince of Aquitaine whose Tower is ruined:

My only Star is dead, – and my constellated lute

Bears the Black Sun of Melancholy.

These famous lines from a nineteenth-century love poem by Gérard de Nerval contain the clue to the identity of the person who brutally strangled and stabbed two young Parisian women with a sharp object in July 1997. In a conversation halfway through Fred Vargas’s gripping thriller, some of the characters come up with a poser: has the killer chosen the poem or has the poem chosen the killer? Clément, a simple-minded and painfully naive young street busker, finds himself in the wrong place at the wrong time, and all the evidence points to him: not only had he been spying on the girls days before they were killed, he even gave the victims pot plants with his fingerprints on them. A straightforward case as far as the police are concerned, and the whole of France is now looking for the Paris killer.

Clément knows that there is only one person he can count on to prove his innocence – his old friend Marthe, who taught him how to read and speak properly when he was a small child. But Marthe is not any kind of woman; she is a former prostitute, now aged seventy, who has regained respectability by selling second-hand books on the banks of the Seine. She is also well connected. ‘I know people who are clever’, she tells Clément. The person she is thinking of is a former Ministry of the Interior investigator called Louis Kehlweiler.

Louis is not your typical detective: he keeps a toad called Bufo as a pet, is translating a biography of Bismarck from German, and has an unorthodox approach to solving the mystery of the killings. Sceptical of Clément’s innocence but intrigued by seeming parallels with an unsolved case from the past, he calls on his friends. Matthias, Marc and Lucien, known for obvious reasons as ‘The Three Evangelists’, are would-be historians, ‘all of them nearing forty … not what you might call shining examples of existential achievement’. These characters take it in turns to protect Clément, but sometimes he appears to be his own worst enemy. Will they succeed?

Vargas’s interest in the past (she is a medieval historian and archaeologist) enriches the narrative at every turn. So does the sheer brilliance of her characterisation, not to mention her witty dialogue. Written in her unique style, admirably and racily translated by Siân Reynolds, this thriller – the third and the last in the ‘Three Evangelists’ series – has all the ingredients that Francophile readers will adore: an impoverished musician, prostitutes, an eccentric detective, the cemetery of Montparnasse, poetry, gratin dauphinois, Sancerre. A book to spoil yourself with over Christmas!

Translated from the French by Siân Reynolds