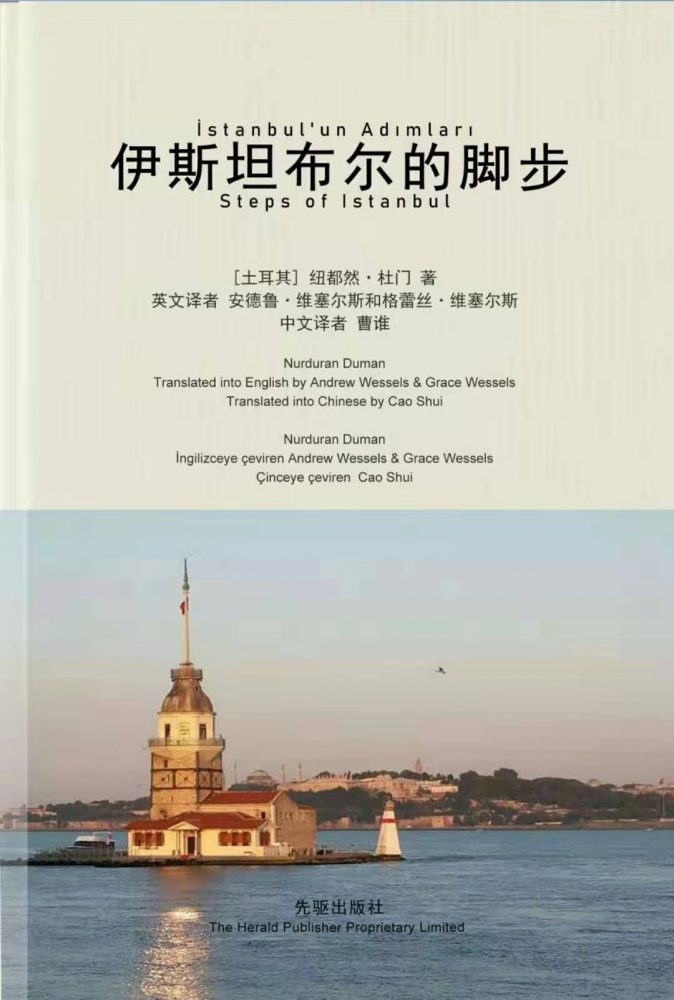 The Daughter of the City: Steps of Istanbul by Nurduran Duman

I learned the loves of cities

get knotted into breakups at the estuary

so now when I come to Beyoğlu

I keep an old child in my pack

Some poets are synonymous with a particular theme, some with a recurring image or scene … Others go a step further and become inscriptions of the city they love, exuding its essence no matter what they write. Nurduran Duman is certainly one of those gifted writers who breathe to the rhythm of a landscape. The lines seem to come to her with each breath of Istanbul air she inhales. Istanbul in its entirety, but especially the Üsküdar neighbourhood, as can be divined from the striking cover image of her poetry collection, Steps of Istanbul. The picture shows the Maiden’s Tower (‘Kız Kulesi’ in Turkish, also known as Leander’s Tower), the emblem of the district. Üsküdar is a feminine place, conjuring up the image of Hero, the priestess of Aphrodite in the well-known ancient myth. The Byzantine tower stands as a symbol of her undying love, as well as evoking the tragic end of her lover, Leandros.

Why am I recounting all this? Because Nurduran Duman seems to be nourished on a daily basis by the image of this tower, by the banks of her beloved Bosphorus which she crosses on a ferry, breathing the same air as the maiden from the myth. Such autobigraphical details can prove invaluable when evaluating or even simply enjoying poetry. Nurduran Duman is in love with her city – and she is the product of this city that she loves.

Duman is internationally recognised, earning widespread praise and awards for her blend of meticulousness and innate talent. She takes writing poetry seriously, and her poetry reflects this attitude. Every word seems to be the accumulation of long years of personal experiences and sensory memory; an act of revelation – of the inner self, and of whatever one has carried along so far in life.

I came across an inspiring review of Steps of Istanbul by Marci Vogel in which Vogel refers to another source, a letter from Istanbul written by the American co-translator of the collection, Andrew Wessels:

‘As I read Andrew’s reflections of the city, his experiences translating the poetry of Nurduran Duman, his account of the Hippodrome, I imagined thousands upon thousands of humans gathered to watch horses or chariots race around a circle. As Andrew notes, the Hippodrome of Constantinople was in fact a circus.’

In the letter, Wessels recalls his conversations with Duman about Istanbul’s skyline:

‘Whenever Duman and I met, we always ended up talking about the sky above Istanbul. Perhaps it is because I grew up in Houston, a uniformly flat city, but the sky here, that overlooks the Bosporus, the Golden Horn, and the many hills of the city, always centres itself in my attention when I open my eyes. Or, as Duman phrased it during one of our meetings: The sky presses down upon us.’

This sensation of a physical connection with the city comes through powerfully in the following lines from Duman’s poem ‘City Steps’, translated by Wessels:

‘I gave up living in one throat

came to myself consciously

stuck now in this city’s throat’

In Turkish, the words ‘strait’ and ‘throat are expressed by the same term. Duman capitalises on these dual semantic fields, referring to the Dardanelles Strait of her hometown, Çanakkale, in the first line, and to the Bosphorus in the last line – Istanbul’s physical, geographical throat, where she feels lodged. This play on words and their meanings is typical of Duman’s poetry; it emerges so naturally that at first you simply enjoy the impact of the lines, then gradually become alert to the linguistic subtleties. Duman does not ram home the metaphor, but rather lets it sink in effortlessly in a deft act of linguistic forging.

Andrew Wessels and fellow translators, Grace Wessels and Karen McCarthy Woolf, deserve a round of applause for conveying in English the multiple meanings of the Turkish poems, the myriad images and references that the poet has loaded them with. Take, for example, Andrew Wessel’s translation of the ‘dark rooms coloring life’ and ‘a city’s first steps to man’ in this passage from ‘City Steps’:

from Maçka to Tünel is a very long stage

I build ships from iron passing

a city’s first steps to man …’

If Duman is the daughter of Istanbul, the city is her twin persona with its clouds and glimmers of sunshine. In each and every line, the city is the key adhesive or cohesive element. Even when it isn’t verbalised or materialised in Duman’s verses, it is there – in its bright and grey moments, in life and in love, forever.

‘This city loves its clouds, but clouds aren’t the bad guy in this life story.

Neither is the sun, even though it takes days to break through.’

As a scholar of translation studies and a translator of literature (including a collaborative work with Duman on the translation of a play, and the translation of one of Duman’s plays under the editorship of Andrew and Grace Wessels), I’m keen to find the right words to express my happiness, without sounding too subjective, of reading such target-oriented and fluent English translations that appeal to the hearts and minds of their target readers all around the world. Although, academically and objectively speaking, I don’t have any prejudice against source-oriented products of translation that direct the target reader to the source text rather than bringing the text to the reader’s feet, as a poetry reader myself I must admit a subjective preference for the former.

I wish that I could also read and understand the Chinese translations by the poet Cao Shui, and compare all three texts for more examples of the translators’ cultural and magical touch. Steps of Istanbulis a collection that embodies the collaborative effort of the poet and her translators: a happy team of friends, apparently!

Alev Bulut is a professor in Translation and Interpreting Studies at the Istanbul University. She has translated around 50 titles of fiction and non-fiction. Her fields of academic research and publication topics include community interpreting, gender and literature in translation, text and discourse analysis for translation. She is the author of Language and Text in Translation / Çeviride Dil ve Metin (2003); Ideology in Translation: Ideological Translation (2008 / 2018); Translation Error!? / Tercüme Hatası!? (2015 / 2022); Football Interpreting in Turkey / Türkiyede Futbol Çevirmenliği (2018).