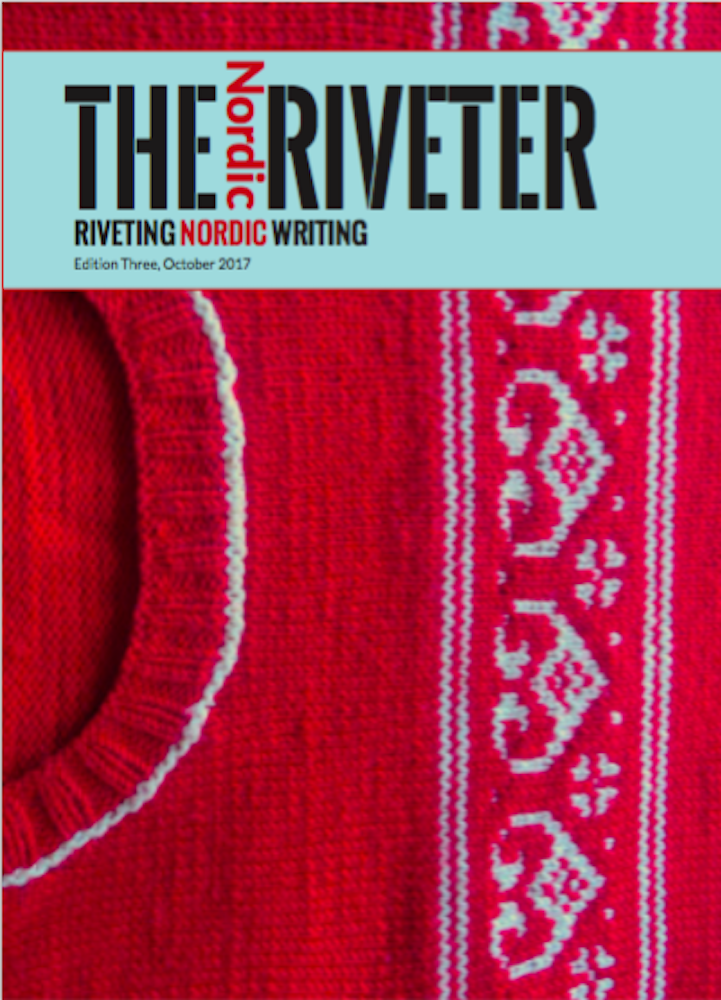 I became a Nordic Riveter a couple of decades ago – before Nordic Noir became the big brand it is today – after reading my first Wallander story by the late, great Swedish novelist Henning Mankell. I was riveted. Various Scandinavian crime series followed on TV and I watched them all. Then came the hygge books, the wood-carving and knitting books, and a whole forest of thrillers. I then received my first hand-knitted Norwegian sweater – and there was no going back. I love my red-and-white sweater so much that we’ve put it on the front cover.  I made my first actual trip ‘north’ to Sweden for the BBC. I took trains through dark forests and saw Stockholm sparkling at night – and was riveted afresh. Finland is the one Nordic country I have not visited, but I feel I know it thanks to reading its great literature and interviewing some of its pioneering writers, such as Sofi Oksanen and Katya Kettu.

These days I’m a regular Nordic Riveter. Every year I host the Norwegian arts and literature festival, SILK, in the heritage town of Skudeneshavn. This is where I first met our Guest Editor Gunnar Staalesen, Norway’s Grand Master of crime.  Norwegians even knit during the events. This September I was a guest moderator at the Reykjavík International Literature Festival and fell in love with the geysers, waterfalls and the novels of Nobel Prize-winning author Halldor Laxness.  I am also the proud owner of an Icelandic knitted hat.

Nordic writers have given me some of my greatest reading pleasures over the past two decades, and also, as an interviewer at events and festivals, some of my greatest interviewing pleasures. Not only do they write with great depth and psychological insight, they talk like that too, and often in excellent English. Karl Ove Knausgaard was an early interviewee – at the Hay Festival in Wales, just after the first volume of My Struggle was published in English: there were only a handful of people in the audience. I called him a genius then. I believe he still is. Today Knausgaard draws audiences of hundreds or thousands when he speaks. Icelandic writers such as Sjón, Jón Kalman Stefánsson and Yrsa Sigurðardóttir have profoundly influenced my inner life over the years. And thanks to the pioneering work of the annual European Literature Night at the British Library, and a growing number of Nordic Literary events, I’ve been exposed to the creative brilliance of Dorthe Nors, Pia Juul and Naja Marie Aidt from Denmark and Anne Sward, Jonas Hassan Khemiri and Steve Sem-Sandberg from Sweden – amongst many others.

Several of these writers, and their translators, feature in our Nordic Riveter, made possible thanks to the generosity of  our Norwegian, Swedish and Danish benefactors and, as ever, Arts Council England and Creative Europe. “Hygges” to you all. And extra special “hygges” to my fellow Riveters, Anna Blasiak and West Camel.