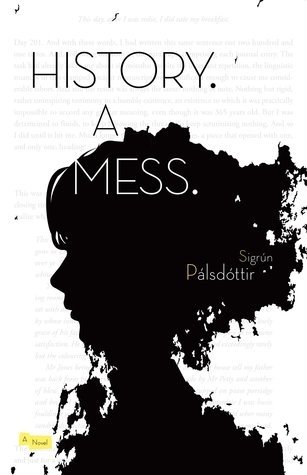 It is exceptionally difficult to say anything about this short, remarkable novel without revealing crucial details about it, things that the reader should discover during reading. Even the back-cover copy says too much, so I strongly urge everyone who thinks of joining the narrator on her difficult journey not to look at it. Instead approach the novel itself without instruction, without any other detail than it is about an Icelandic art historian. This, as we learn early on, is her second career choice, which she chose having been rejected by the Royal College of Arts. She has recently completed her thesis in England, but has not yet submitted it, and has now returned home, together with her husband. For the duration of the novel, she is living through some difficult times. We get to meet her family, her relatives, her friends, and we get to follow her doubts about herself and her work.

This summary of what occurs in this novel merely scratches the surface, however. In a certain sense, the novel is a practical illustration of ‘standpoint epistemology’, or the feminist philosophy of science developed by a number of theorists in the 1990s, who claimed that knowledge is always embedded in the context of its production and embodied in the people who have produced it. History is therefore never an impersonal account of what we ‘know’ – rather, it takes shape at the intersection of the trajectories of the past and the present, and contains traces of its mediators as well as its characters. And though all stories could be written in a variety of ways, the reader should be awestruck by just how differently this particular one is written, how it deviates from anything one could possibly expect.

What I admire most about Pálsdóttir’s writing is her ability to hide a strictly structured course of events under a gliding, occasionally deliberately (but not distractingly) chaotic style; her ability to orchestrate the random; to construct a perspective for the narrator that, most of the time, reveals both everything and nothing about what is actually going on; and the way she covers real tensions and worries with a quilt of details, as they are so often covered in life. Each of these little details triggers memories – some of them hidden, others obsessive, and none remembered precisely the way other people might recall them. History is indeed a mess in this book, right until its devastating last pages, where everything falls into place.

Another remarkable quality of this novel is the author’s ability to make its characters come alive with just a few brushstrokes. Quite possibly, this is a result of Pálsdóttir’s academic work; as a historian, the ability to see a lot through a little, and to adopt the eyes of another is an invaluable professional skill.

A few good words also need to be said about Lytton Smith’s smooth and readable translation. The voice of the narrator is both distinct and personal in its English version, and the reality in which her story unfolds becomes a natural presence of another culture in a translated guise. It is always a joy to encounter new voices from behind the linguistic curtain – and an even bigger one when they haven’t lost their timbre in passing through it.