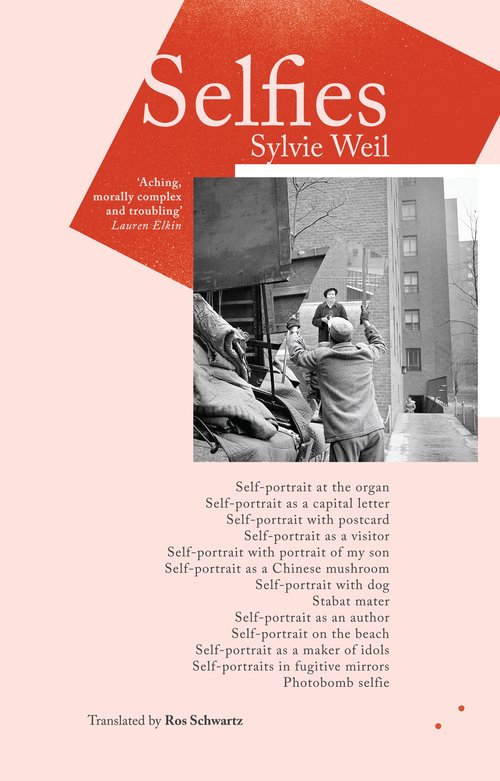 Selfies is an account of women’s way of seeing themselves and of the author’s self-image. Sylvie Weil puts herself in the picture, ‘painting’ with words, using her phone. After all, ‘Everyone takes selfies. It’s a way of going unnoticed’ – just as women artists went unnoticed for centuries even when putting themselves in the picture.

Selfies displays women’s self-portraiture, from the ‘German illuminator by the name of Claricia [who] portrayed herself on the page of a psalter, at Psalm 52, gleefully swinging by her arms from the tail of a large capital “Q” in the year 1200’, to street photographs and self-portraits by the extraordinary Vivian Maier, amateur only in that she worked as a nanny. It wasn’t until after her death in 2009 that her skilled and copious output was exposed to other eyes. Translating visual imagery into verbal, Weil illustrates and frames her self-portrait by highlighting the neglected work of such women artists.

Chapters are prefaced by ‘Self portrait …’ followed by enticing descriptions, such as ‘… as a Chinese mushroom’, ‘… in fugitive mirrors’, even ‘… as an author’. A rare exception is ‘Stabat Mater’, a courageously excruciating account of her son’s psychotic episode and subsequent hospitalisation. The impetus is a display in a Tuscan village church of schoolchildren’s drawings of ‘Our Lady of Sorrows’, Mary praying beside her crucified son. ‘The Virgin’s tears … streamed down to the ground in long, absurd strings, like sausages’. Weil has a sharp eye for absurdity even in the midst of tragedy.

The writing is consistently witty, vivid and punchy despite its economy, and throughout, perfectionist literary translator Ros Schwartz sheds as powerful a light as the author on hitherto hidden stories of women’s self-portraits and the darkest of family secrets.

Following affairs of the heart and of finance, Weil settles a few scores, from Paris to New York, and Japan to Tel Aviv. An American lover, amorous in Paris, who invites Sylvie to follow and marry him then eludes her on her arrival in the US. An interviewer for France Culture claims friendship, then exploits Sylvie to promote her own writing. Customers use book signings as backdrops for crafted selfies, collecting authors’ signatures to enhance the retail value of their old copies of earlier novels rather than purchasing the new one.

The first image (Sofia Anguissola at the spinet in 1561) plays out with Weil ‘painting’ herself learning to play a church organ, not far from the Weil family’s apartment on the Rue Auguste-Comte, which was requisitioned during the Nazi occupation of Paris. In 2009 Sylvie Weil published a poignant dual portrait of her father, pioneering mathematician André Weil, and her aunt, philosopher Simone Weil – At Home with André and Simone Weil, in which their home life was viewed through private and public memories, diaries and photo albums. Here it reappears as the cradle of a new generation bombshell. Indeed, ‘Photobomb Selfie’ is a chapter in which someone unexpected suddenly appears. The most astonishing of the book’s many surprises is saved until last.

Amanda Hopkinson is a literary translator, and professor of literary translation at City, University of London. She translates from Spanish, Portuguese and French, mainly specialising in fiction, poetry and human rights/testimonial writing from Latin America. At City, she has introduced MA courses in Professional Orientation (in literary translation), and co-founded the annual Translate at City Summer School.