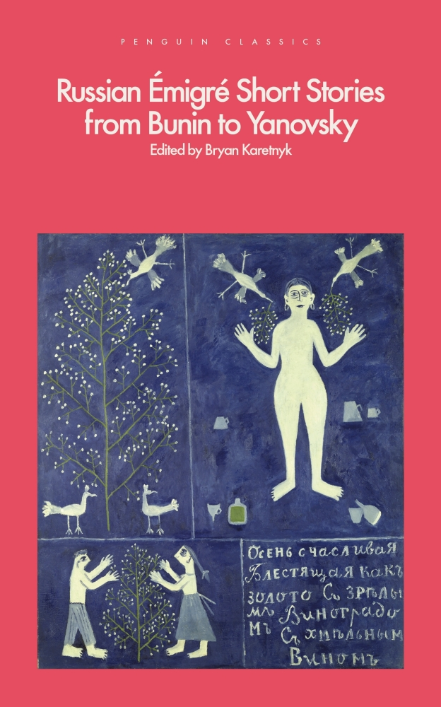 The twentieth century spawned two Russian literatures: one living within the confines of the USSR, the other beyond the Iron Curtain. These two literatures remained divorced, with Russian émigré writers starved of a Soviet readership and only finding publication on their native soil once Communism fell. Bryan Karetnyk’s new anthology Russian Émigré Short Stories from Bunin to Yanovsky offers a compelling glimpse into the lives and minds of the diaspora – those who fled during the 1917 Revolution or Civil War. Many renowned figures – Dovlatov, Solzhenitsyn, Brodsky, Limonov and Teffi – were fated to live as authors exiled from Soviet Russia, and the threat of exile haunted many others.

Among the most powerful in the collection are the tales dealing with love, loneliness and illicit affairs. Ivan Bunin’s “In Paris” opens the anthology. It begins with a chance encounter between two émigrés in a Russian restaurant in Paris; gradually they find solace in each other’s arms, before fate intervenes cruelly. The deftness of Bunin’s hand ensures that the images and emotions of this story will continue to haunt you. Nina Berberova’s “The Murder of Valkovsky” is starkly different in character, and yet the themes overlap: exiled Russians clinging to one another, finding companionship, succumbing to passion. Irina Guadanini’s storytelling skills may not rival Bunin’s or Berberova’s, but “The Tunnel”, believed to be a veiled account of her affair with Nabokov, captures the dark claustrophobia of a doomed love affair between émigrés.

Many of the stories offer a more lighthearted picture of life in exile. The corruption of Russian and its cross-pollination with foreign languages feature in Nadezhda Teffi’s “A Conversation”. Pre-revolutionary Russian literary works were, of course, dotted with dialogue in French, the language of the Russian aristocracy, but in this story we watch helplessly as Russian morphs into a mongrel idiom. Teffi’s mordant wit is also at work in “Hedda Gabler”, describing a hilariously infuriating meeting with a seamstress who styles herself “Madame Elise d’Ivanoff” and is “hounded by forms”. “Spindleshanks”, by Sasha Chorny, involves a lengthy, humorous rant against the fashionable yearning for skinniness, as resonant today as when first written in 1931.

In Nabokov’s story “The Museum”, the narrative slips into a disorienting confusion of realities, as the protagonist faces the terrifying ordeal of a return to Russia. “They Called Her Russia”, by Vasily Yanovsky, the final story in the anthology, is similarly dreamlike: visions and memories come tumbling out, punctuated by the question: “Dream or real?” It offers a hallucinatory train ride through Russia at war.

Karetnyk’s anthology transports the reader into the motley lives and imaginations of Russian émigrés in Paris, Berlin and beyond. It is a welcome addition to our bookshelves. Highly recommended reading for anyone fascinated by pre-revolutionary Russian culture as preserved among the ranks of the two million-odd Whites that formed the first wave of emigration from Bolshevik Russia.

Anna Gunin is the co-translator of Chernobyl Prayer by Svetlana Alexievich. Among her translations are Oleg Pavlov’s award-winning Requiem for a Soldier and Mikail Eldin’s war memoirs The Sky Wept Fire. She has also translated films and fairy tales, plays and poetry. She led our Riveting Russian Translation Workshop.